My father hated to talk about the family trees, and it was only after he died that I discovered Frank Salter’s Whitworth Scholarship medal, tucked away at the back of a drawer. My father never mentioned it, and perhaps he didn’t even know it was there, or what it was.


My great great uncle Frank Salter was part of the second wave of Victorian industrial invention. The first had climaxed in that huge imperial show-off, the Great Exhibition of 1851, an in-your-face demonstration of ’s mastery of science and technology. It laid all ’s achievements out for the world to see and said, “This is how far we’ve come.” But it also asked, “Where do we go from here?”

Frank was a scientist, an engineer. Born in the Year of European Revolution, the son of a Baptist minister, his was the first generation whose education was built on the exhibition floor of the . He was the product of the non-conformists' hunger for knowledge in the name of self-betterment and social improvement. He went to Amersham Hall, “an Academy for the Sons of Liberal Gentlemen”, and then to University College London, founded by non-conformists for non-conformists, who were barred from higher education at and , the only other universities in England. Frank was gifted. He was awarded an Exhibition of £25 to study maths at , graduated with a BSc and after a two-year apprenticeship in the LNWR steam engine workshops at he won the Whitworth Scholarship in 1871.

Sir Joseph Whitworth was the leading mechanical engineer of his day, the son of a dissenting schoolmaster and Congregationalist minister who had taught his son at home for the first twelve years of the boy’s life. For his engineering achievements he had won more awards than anyone else at the Great Exhibition. In 1868 he had set up a Scholarship fund to encourage promising apprentices to pursue their education, and the award enabled Frank to extend his apprenticeship by another three years with Clarke, Watson & Gurney, a company making innovative steam-powered cargo winches in . During his time there he studied not only engineering but also people – the firm was at the centre of a landmark engineers’ strike throughout the North-East in 1872 over working hours. 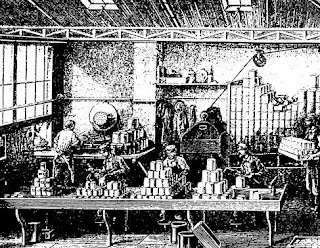 Bryan Donkin & Co had made their name by developing
paper-making machinery, and by pioneering the tin can
as a means of preserving cooked food (but that's another story)


Frank was by now specialising in hydraulics and steam power. In 1874 he joined Bryan Donkin & Co, Bermondsey, first as a manager then from 1881 as managing partner of their works. There he seems to have been given full rein to conduct a series of trials and prototypes, working closely with his new boss, Bryan Donkin, son of the founder of the company. Separately or with Donkin he published papers on the economical use of steam, on trials of a rotative pump engine, on measurement of water over weirs, on experiments he’d conducted in 1886 with a small steam engine at his alma mater . Frank’s enquiring mind was being fed, fuelled, driven: it was firing on all cylinders.

Then, in the autumn of 1887, his health failed. I don’t know how exactly – perhaps it was all that water and steam. He had to abandon his work, and although he returned briefly the following summer, he never regained his strength. He died on the last day of 1888. The closing paragraph of his obituary in “Proceedings of the ” reads:

“The genial, thoughtful and hardworking character of Mr Salter, with his kind and quiet disposition, gained him many friends in the works as well as in the offices. A special feature of his character was a keen sense of honour, appreciated by all those with whom he came into contact in business. As an employer he was much respected, and his early death was greatly regretted, not only by his partners, but by all those under him.”