I’d like to know more about my great great grandfather Richard William Ralph Sadleir, but here’s what I’ve pieced together so far. 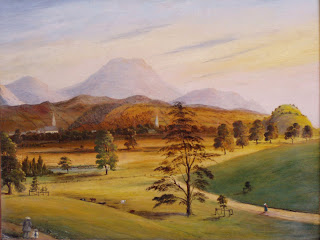 
He was born in Sadleirswells, Co Tipperary, desecendent of a family with a proud tradition going back to the sixteenth century, a man whose relatives were among the great and good (and not-so-good) of the land. He married well, in 1848, to Eleanor Wilhelmina Octavia Cooper, daughter of another prominent family of the Protestant Ascendancy. 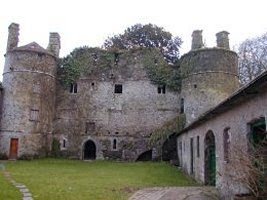 
But by 1861 he was living in a cottage in Sutton in with his wife, five children and a “poor dependant” man from . He was working as a chemical manufacturer’s assistant, and three years later he set up his own New Road Chemical Works in St Helen’s with a business partner, John Lawrence Kean. But the scheme failed in 1866 and he ended his relatively few days, aged just 57, as a banker’s clerk in a terraced house in Toxteth.
I think what happened is that he got caught up in the collapse of the Tipperary Bank brought about by the fraudulent activities of his cousins James and John Sadleir in 1852. It was a cataclysmic event for thousands of small and not so small investors in the county, who lost everything. John Sadleir, who it seems had been the criminal mastermind in the scandal took his own life that year by drinking prussic acid on Hampstead Heath one night. His brother James, who had also been implicated, refused to face justice and fled to , where he was murdered for his gold watch in 1881 while out walking on the Zurichberg.
If Richard Sadleir lost all he had in the bank’s failure, it would explain why he went to find work in the industrial goldrush of mid-nineteenth century . There’s no suggestion that he had any aptitude for chemistry, or any wealth with which to support his young family (only one of whom had been born before they left ) in the lowly English addresses I have for them. I don’t know how he died, but it seems safe to say Life didn’t turn out as he might have expected it to. 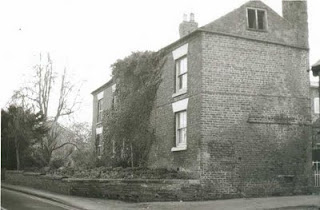 
His wife had grown up in a castle, and died in a cottage, Holly Cottage in Little Saughall, where she had been living with two unmarried daughters. Another daughter, my great grandmother Eleanor Sadleir, left a note on the back of a photograph of her mother’s former home, keeping the memory alive, I’m grateful to say, for me and future generations.
Posted by Heart of the Wood at 07:30