My Gurney ancestors had their finest hours in the century or so in which they were official shorthand writers to the Houses of Parliament. But the reputation of the Gurney system of shorthand was built in London’s law courts, especially the Old Bailey, by Joseph Gurney ( my 4x great grandfather, whose father Thomas had invented the system). 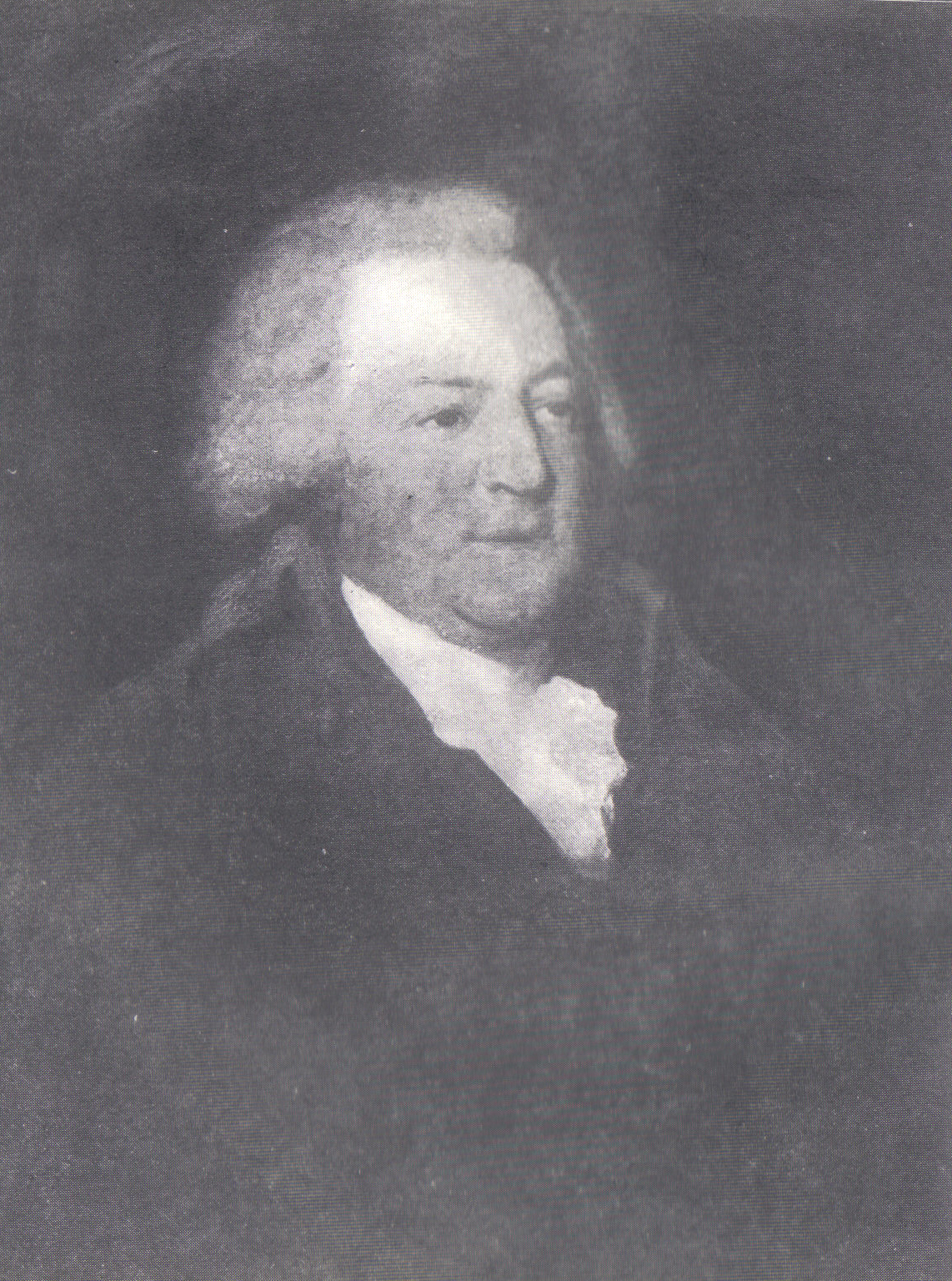 The newspapers did not report court cases in those days, and the public appetite for sensational evidence was catered for by private shorthand writers who printed their verbatim reports of proceedings. The cases recorded by the Gurneys were acknowledged to be more accurate transcriptions than their competitors’.

One of the scandalous hearings on which Gurney shorthand made its name concerned the Gordon Riots of 1780. It was a case of particular personal interest to the Gurney family and others of their nonconformist persuasion. If you were not Church of England, your freedom to participate in public life was significantly restricted under English law, and in 1780 this applied to Roman Catholics even more than to nonconformists.

Two years before the riots, in 1778, Catholics had been advanced some limited concessions, notably the right to serve in Britain’s armed forces without swearing a religious (in other words, Protestant) oath of allegiance. This was an act of expedience as much as tolerance – Britain was at war with France, Spain and the United States, and needed all the troops it could muster. Nevertheless it was a liberal act which drew opposition from the Protestant majority, particularly in the form of an organisation called the Protestant Association led by Lord George Gordon. 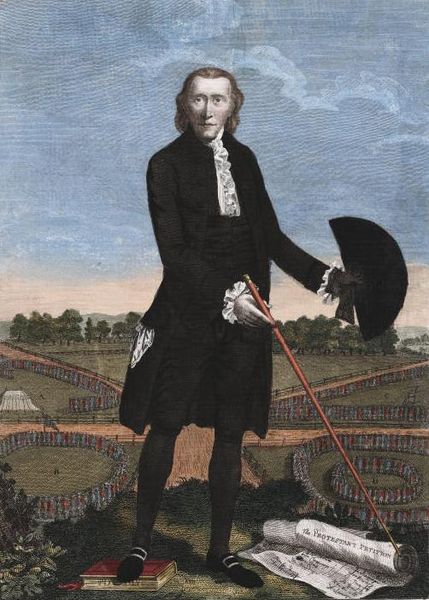 Gordon was a maverick politician. A London-born, Eton-educated member of the Scottish nobility, he was unpopular with the establishment for his improvement of working conditions for sailors and his support for American independence. His opposition to Catholic emancipation could be seen in the same anti-establishment light; and popular support for his position was swelled by a general dissatisfaction among the public. Conducting war on so many fronts had damaged Britain’s overseas balance of trade, driving wages down and prices and unemployment up.

Whatever the source of his support, a crowd of around 50,000 marched on 2nd June 1780 under the Protestant Association’s banner and wore its symbol, a blue-ribbon rosette or cockade. With their entrance to the House of Commons blocked, they attacked the carriages of members arriving at the House of Lords. Although the crowd was eventually dispersed, violence flared up again later in the day elsewhere in the city. Riots rumbled on for the next five days, with attacks on houses and embassies with Catholic connections. 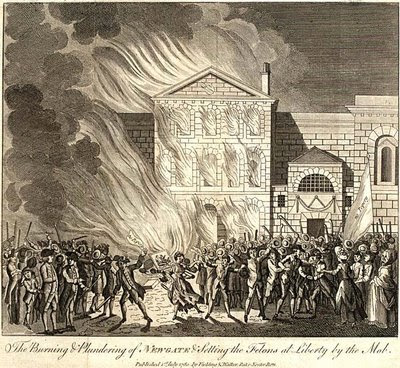 The Burning and Plundering of Newgate, and Setting the Felons at Liberty by the Mob

Catholicism wasn’t the only target. The Bank of England was besieged, and several prisons including Newgate attacked and destroyed, releasing large numbers of escaping prisoners into the chaotic streets. On 7th June the army was finally called in, and ordered to open fire on the rioters. 285 were killed, 200 more injured and a further 30 later sentenced to death.

Gordon himself was tried for high treason as the leader of the organisation in whose name the riots had begun. The trial naturally attracted a great deal of attention in the wake of the long and violent events which triggered it. He was acquitted on something of a technicality surrounding the definition of treason. His acquittal was popular with the public; and so too, presumably, were the transcriptions of the hearing published immediately afterwards by Joseph Gurney, and by his competitors. 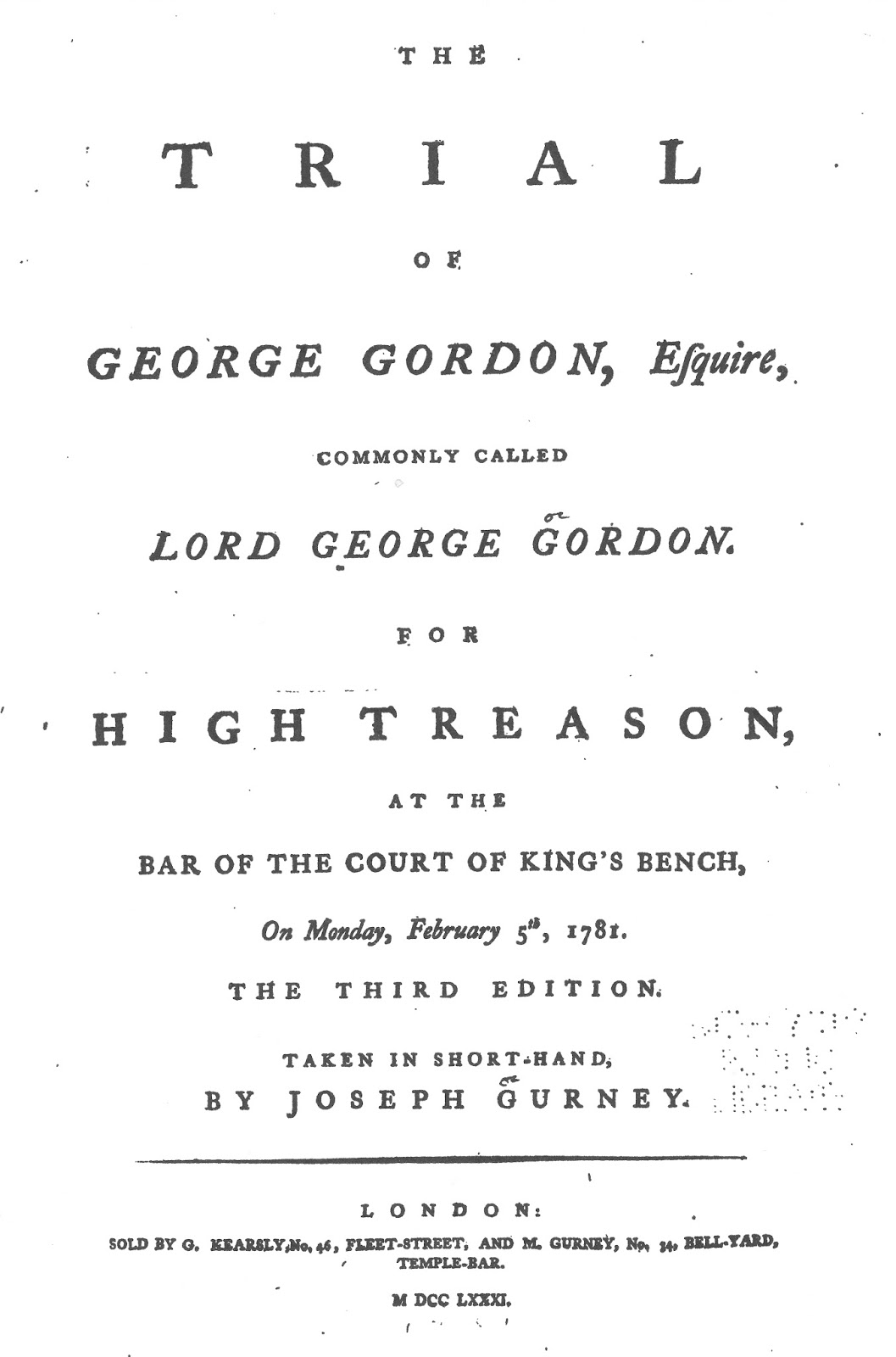 The cover of the transcription of the trial of George Gordon, “the third edition, taken in shorthand by Joseph Gurney, London, sold by G. Kearsly, 46 Fleet-street, and M. Gurney, 34 Bell-yard, Temple-bar”

The establishment had its revenge on Gordon. In 1788, having been excommunicated by the Archbishop of Canterbury, he was imprisoned on the unlikely charge of defaming Marie Antoinette, consort of Louis XVI of France with whom Britain had lately been at war. In 1793 he died of typhoid in Newgate, the very prison which his supporters had destroyed thirteen years earlier.
Posted by Heart of the Wood at 07:30 No comments:

Email ThisBlogThis!Share to TwitterShare to FacebookShare to Pinterest
Labels: Gurney


I have written about several of Talfourd’s court appearances here. They were often fascinating, and his conduct of them sometimes surprising – as when, for example, he called a baby elephant as a witness. He was a cousin of my great great grandfather's, and he came across as quite human for a lawyer. So I was saddened when I read the Gazette’s report. Talfourd never married. Was he alone in Varese? I presume he was on holiday, but perhaps he was convalescing. Could he have been hiding? His recent appointment by the Post Office suggests that things were going well for him; but was he happy or unhappy with the way his life had turned out? He was only 56 at his death (on 5th October), the same age as me, and I can find no further details about the circumstances. 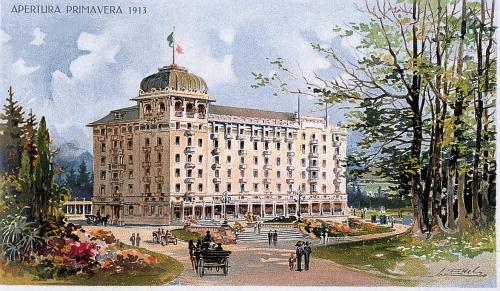 
And where, exactly, did he die? Today, Varese in the far north of Italy boasts not one but two Grand Hotels, both designed by the important art nouveau architect Giuseppe Sommaruga. What are the chances?! But neither of them was originally called the Grand, and neither of them was yet built at the time of Talfourd’s death. The Palace Hotel opened on a hill in the city in 1911, and the Hotel Tre Croci in the Campo dei Fiori national park northwest of Varese a year later. 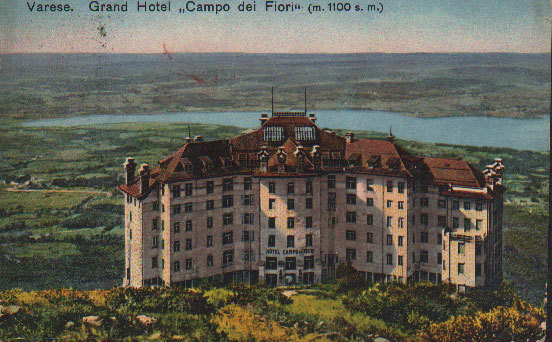 
As the Palace Grand, the former is still going strong and boasts its own heliport. But the latter relied for its tourist trade on a funicular railway, which closed in 1958; and the Grand Hotel Campo dei Fiori followed suit ten years later. Now it is a sad ruin, used only to support communications masts. Ther must have been an earlier Grand Hotel in or near Varese, but I have found no record of it yet. My email to the Palace has not so far received a reply.


Was Talfourd Salter buried in Varese, or was his body brought home to London? His will was proved (with some alacrity, it seems to me) less than five weeks after his death, in England. He was worth £3531 3s 3d, a tidy sum in its time. I haven’t seen the will yet, so I don’t know about its beneficiaries.


There are still avenues for exploration – the will, a death certificate, a history of Varese perhaps. But it is frustrating that a man whose public life is so well documented in the transcripts of his court cases should have such a private death, hidden away from prying eyes both then and now.
Posted by Heart of the Wood at 07:30 4 comments: