Helen Verrall, my great aunt, was, like her mother Margaret, a psychic medium, active in the Society for Psychic Research. The Society was formed in 1882 with the intention of applying scientific methods to the study of that great Victorian fascination, the paranormal. 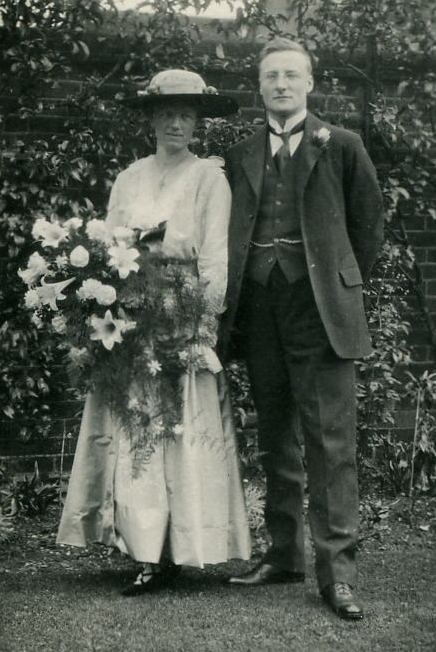 
After her marriage in 1915 she introduced her husband William Henry Salter to the work of the Society, which he joined in 1916 and served at various times as Treasurer, Secretary and – in 1947-48 – as President. He was a historian at Cambridge; but as far as I can tell, all his published work after his marriage was concerned with psychic phenomena, including Ghosts and Apparitions and Zoar, his review of the evidence of psychical research concerning survival after death, dedicated to Helen “and all who are working to complete Man’s knowledge of his Nature.”


As Mrs W.H. Salter, Helen also wrote, and gave talks. Among her publications is the Frederic Myers Memorial Lecture which she gave in 1945, Psychic Research: Where Do We Stand?; and Evidence for Telepathy: The Response to a Broadcast Request for Cases, which followed a talk she gave on the BBC on 16th February 1934 with a round-up of some of the four hundred letters she subsequently received. “A few of these,” she notes in her introduction, “were from persons not entirely sane.” 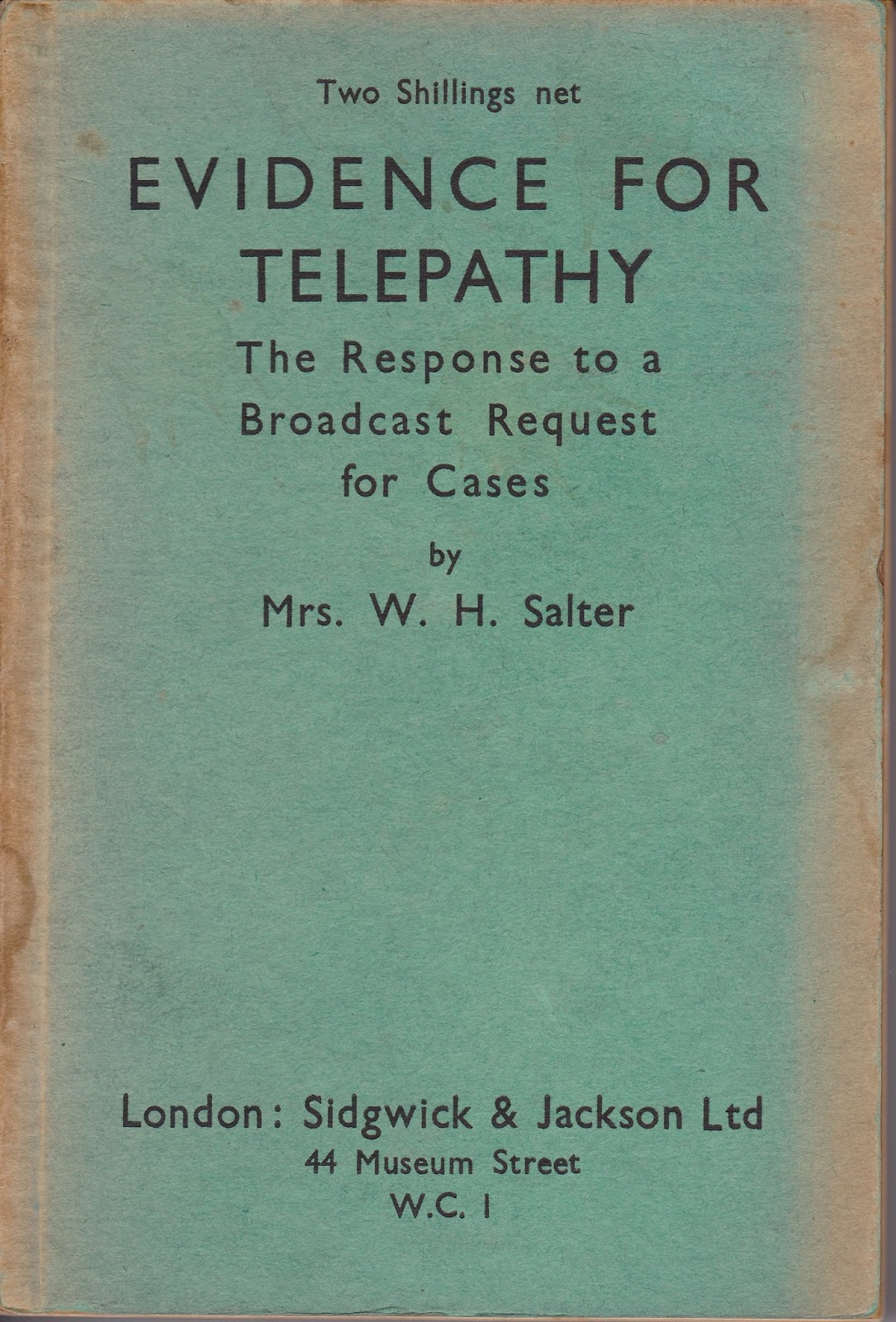 
The book examines fifty eight of the more credible ones, and she concludes, “These are the kind of things that happen from time to time to ordinary people, leading ordinary lives.” There’s a lovely matter-of-factness about that remark that I like.


Many of her correspondents describe telepathic intimations of the death or illness of a loved one which were later confirmed by more conventional communication. It is shiver-up-the-spine stuff, and I wonder idly where Willy was when Helen died, and whether he sensed her parting.
Here are two of the cases she reports. The first
… was sent by Mr JR Johnstone, who wrote as follows:
My Battalion was stationed at Ballykinlar Camp, County Down, Ireland, in April 1917. On 5th April I was “Captain of the Day.” Part of my “duties” was the turning out of the various Guards, once after 10pm and once after midnight. Between these times I was sitting alone on a deck-chair in my cubicle reading a book.
In the middle of a chapter, I stood up and exclaimed aloud, “Arthur is killed.”
On April 7 Mr Johnstone received an official telegram informing him of his brother Arthur’s death in action on April 5th, and subsequently he learnt in a letter from a brother-officer that Lieutenant Johnstone had been killed at about 11pm.
The death of 2nd Lieutenant Arthur James Johnstone, 6/7 Bn The Royal Scots Fusiliers, is officially recorded [notes Aunt Helen] as having occurred on April 5, 1917.


For the second, her informant
… was Mrs Bradburn, who wrote thus:
In the year 1893 my husband’s brother was out in South Africa at the time of the rising of the Matabele War, and all had to take part in it to protect their farms. One night my husband woke me up, and was terribly upset. He dreamt he saw his brother in the midst of fighting, and all at once he saw a lot of smoke and his brother fall into it, at the same time calling my husband by name.
That was on December 3, and we got a letter from him on January 1, saying they were going to fight Lobengula, the King of the Matabeles. The letter was dated on the eve of the battle and it coincided with my husband’s dream. My brother-in-law was one of the twenty-four brave men in Major Wilson’s last stand.


Major Wilson’s Last Stand was a celebrated act of British Imperial heroism. The entire party (actually thirty-four men) were cut off and massacred by 3000 warriors in the British equivalent of Custer’s Last Stand. A Sgt Bradburn is known to have been a member of Major Wilson’s party. 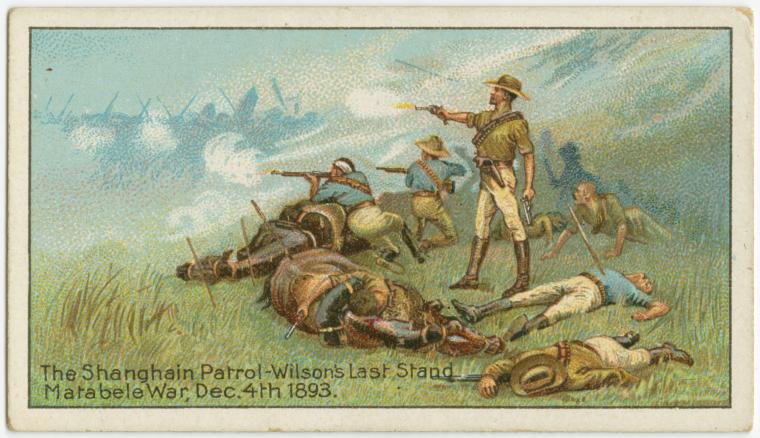 Major Wilson’s Last Stand, as depicted on a cigarette card
Posted by Heart of the Wood at 07:30 No comments:


Charles Masterman, a cousin of my grandfather, is regarded by many as one of the last great old-school Liberals. But his political potential was frustrated by his inability to find a safe seat. He lost as many parliamentary elections as he won, and his party was eclipsed by the emergence of the new Labour Party before he could shine in office. He died a disappointed man in 1927 at the age of only 56.

He wrote throughout his life. But it was through his friendships with other writers, forged in the years before the First World War, that he had his greatest literary influence. When Britain entered the war in 1914, Chancellor of the Exchequer Lloyd George put Masterman in charge of the newly created War Propaganda Bureau.

Books shape minds. Their very presence by a bedside encourages you to read them. The words within challenge your ideas and form your dreams. If nonconformists like the Gurneys understood this, so too did the propagandists. On 2nd September 1914 Masterman summoned a Who’s Who of British authors to his offices in Wellington House on Buckingham Gate in London. Twenty five literary giants of the day were present at the meeting, among them J.M. Barrie, John Galsworthy, Thomas Hardy, my grandfather’s friend G.K. Chesterton, Cambridge Apostle G.M. Trevelyan, H.G. Wells and Arthur Conan Doyle. Rudyard Kipling sent fulsome apologies and his full support.

What an extraordinary gathering! It took place that September afternoon, and I imagine our authors, all male, arriving one by one as dusk is falling. It’s raining and their capes and overcoats drip as some civil servant removes them from their shoulders before ushering them into a long-tabled meeting room. Full-length portraits of forgotten politicians look down on green leather chairs and the backs of those writerly heads. On the table before them, writerly hands hover over the pens and notebooks of each author’s choice or beside crystal tumblers filled from nearby jugs of water or decanters of brandy and whisky. The heads are wreathed in tobacco smoke as they wrestle with what Conan Doyle might have described as a three-pipe problem: how to counter the newly discovered German propaganda machine.

The approach which they agreed that evening was a subtle one. Rather than pump out propaganda through some patently biased organ of state, Masterman encouraged his authors to write in their own terms about the outbreak of war and about British values. Their output was printed, by secret arrangement, by mainstream publishing houses rather than the government’s own stationery offices. Consequently, none of the output of the War Propaganda Bureau was identified as state propaganda by the British public, but simply as patriotism. 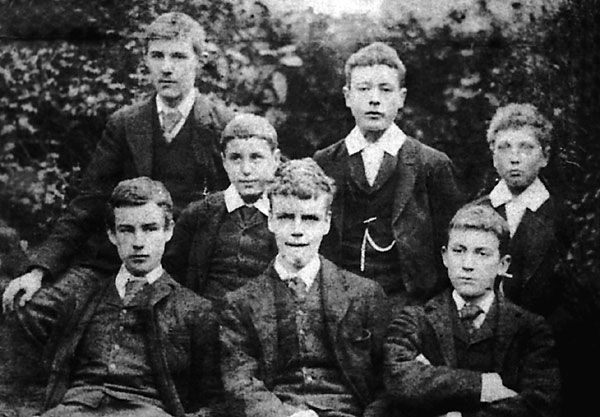 Members of the Junior Debating Club at St Paul’s, London – among them Edward Fordham (tallest, at rear) and G.K. Chesterton (seated, front centre)

Masterman’s authors recruited other authors to the cause. For example, after that first meeting G.K. Chesterton roped in his and my grandfather's old school friend E.W. Fordham. Fordham, like my grandfather, was too old for recruitment into the army, but older men such as he were urged to serve in other capacities, releasing younger men for military service. Fordham (a poet by inclination but, like my grandfather, a lawyer by profession) volunteered to be a Special Constable.

A large force of Specials was recruited during the war years to replace the younger officers who had gone to fight overseas. They were unpaid, and served mainly as a visible reminder of the need for law and order in unstable times. They were also of practical use, chiefly in guarding the nation’s water supply against sabotage by enemy agents. Fordham seems to have been placed on such duty. In 1916 he published Songs of the Specials, describing in his preface the melancholy tedium of “keeping relentless watch on a brick wall.” The first song in the collection, Who?, begins

Who dashes, careless of his skin,
To meet the love-bird of Berlin,
The chuck-and-chance-it Zeppelin?
The Special.

Who watches by the water-works,
Where privily the Teuton lurks,
Besides Bulgarians and Turks?
The Special. 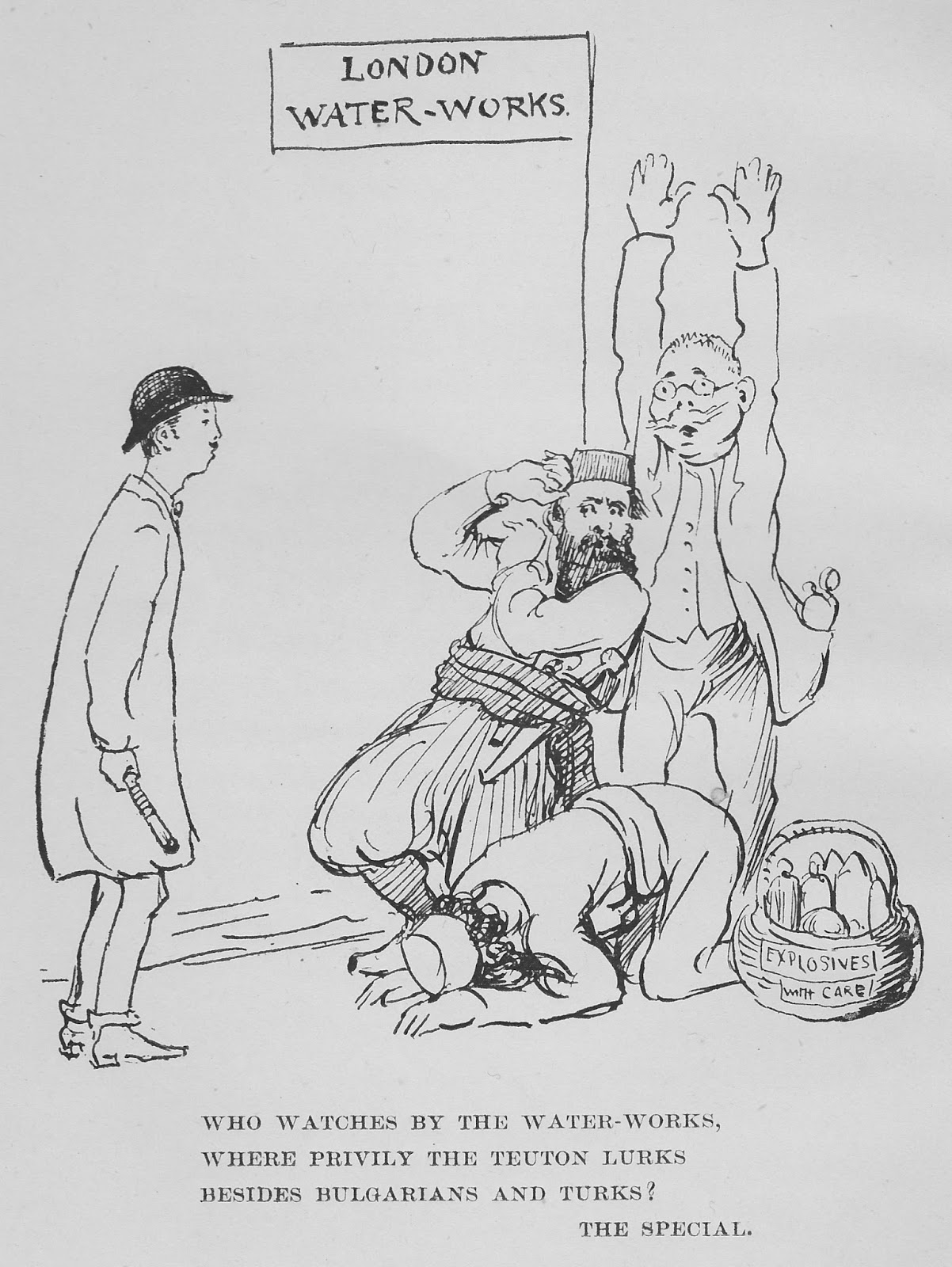 Hugh Riviere’s illustration for E.W. Fordham’s verse Who? In Songs of the Specials

Songs of the Specials was one of millions of books and pamphlets published at arm's length by Masterman's Propaganda Bureau. That first meeting, exactly two hundred years and two months ago tomorrow, launched one of the biggest and most successful propaganda efforts the world has ever seen. Thanks to it, and the Special Constables which it encouraged, the nation's water supply was kept safe from sabotage. Well might Edward Fordham sing!