I found a note amongst the papers I inherited from my uncle, from my great aunt Emily about a distant cousin John Salter, who
“was head gardener at the Tuilerie Gardens (until the coup d’etat) (in the time of Louis Phillipe I believe). He came to England bringing his wife (a French lady, whom I well remember), & his 2 children, Alfred & Annie (Mrs Holborn).”

Well this was all very glamorous and historical, and as it turned out not very accurate.

“Head gardener at the Tuilerie Gardens” – I went to the Tuileries in 1991 and stopped short, thank goodness, of asking the authorities about previous head gardeners in their employ. I did read a short horticultural history of them which made no mention of an English head gardener. The Tuileries, Marie Antoinette’s pleasure grounds, had indeed been overrun by the sansculottes at the time of the 1789 French Revolution. But her king had been Louis XVI. Louis Phillipe was The Citizen King, whose abdication was forced by the French Revolution of 1848 (when any European citizens worthy of the name were revolting).

The truth about John Salter eventually turned up in a history of the chrysanthemum. His father, a cheesemonger and the half brother of my great great great grandfather, had left money in his will for all his children to be apprenticed in the trade of their choice. John chose to be a gardener, and having served his time he established a nursery selling the popular notion of the English Garden ... to the French!

His nursery was at Avenue de Picardie, Versailles, not the Tuilleries, and he had obviously learned his trade well because he was a frequent medal winner at the regular Versailles flower shows. In the troubles of 1848 he did indeed return to England, where he set up shop in his native Hammersmith as “The Versailles Nursery.” He was particularly adept at breeding dahlias and chrysanthemums. Two of his inventions were still listed with the Chrysanthemum Society in the 1960s. One he had named Queen of England in honour of Victoria – a spawn of it he later called Empress of India. The other he named in honour of his eldest child. Chrysanthemum Annie Salter was still a staple of floral arrangements for decades after his death, a beautiful yellow firework of a flower and a lovely thing to be immortalised by.

Amongst his other creations were the chrysanthemums Mrs W Holborn (in memory of Annie’s marriage) and Alfred Salter, for his son. Alfred ran the Hammersmith business alongside his father. 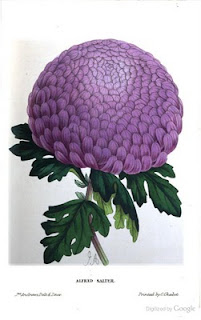 As for his French wife, she was called Jane and came from Reading in Berkshire!
Posted by Heart of the Wood at 07:30