Really if you were a Massy and not called Hugh, then either you were a girl or your parents simply hadn’t done their homework on your family history. In my abbreviated, inexhaustive Massy tree alone there are 19 Hugh Massys, and they all owe their name, not to mention their wealth and position, to my 6x great grandfather Massy. 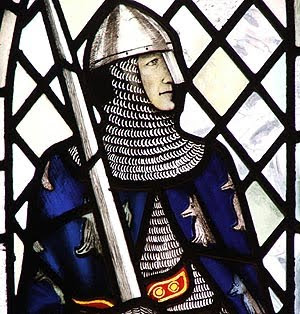 Hugh d’Avranches, 1st Earl of Chester, who shared his winnings

He himself was descended from a French family de Macey, who had been rewarded with estates in for fighting alongside Hugh Lupus d’Avranches at the battle of . No doubt they chose to honour his memory by naming their children after him.

By the seventeenth century the family had expanded their power and lands throughout the west coast of . Then in 1641 rebellion flared up across the sea in . 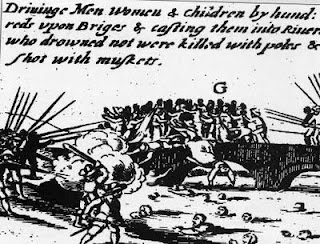 The massacre of (1641),
when hundreds of Protestant men, women and children
were thrown from the bridge by a Catholic mob

Resentment had been simmering there ever since Henry VIII had confiscated Irish catholic lands in the wake of the Disestablishment. Now, with civil war brewing in , that resentment bubbled over. Charles I, distracted by more pressing matters at home, lost control in before he lost his head in . descended into chaos. The rebellion became a brutal free-for-all for the next eight years, and followed the pattern of earlier Irish conflicts (and later ones) with bloody massacres by both sides.

General Hugh Massy was at some point dispatched with a cavalry regiment to help end the revolt. He seems to have played his part in the ruthlessly successful achievement of that aim in 1649 by Oliver Cromwell’s New Model Army. 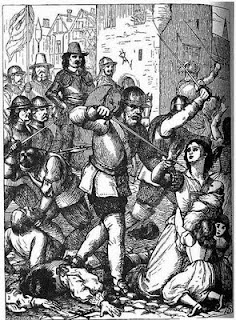 Cromwell’s revenge,
the massacre of thousands of men, women and children
during the sacking of (1649)

By the time the confederacy of Irish rebels had been defeated, the bill for the war in was £3,000,000. It was a bill the English government could ill afford to pay but faced with the rising anger of thousands of battle-hardened but unpaid soldiers it eventually found a neat solution. Cromwell ordered a mass grab of land from the remains of the Irish aristocracy, and parcelled it out to the government’s creditors in lieu of back pay. The rebels were disenfranchised and the army appeased in one simple move.

Like his Norman ancestor, Hugh Massy profited from bloody war. In 1659 he was granted 3000 acres including the estate of Duntrileague in Co. Limerick, which like his Norman ancestor he and his descendents expanded through the generations. His son Hugh trebled the size of the estates over the next 30 years; not one but two of his great grandsons, Hugh and Eyre, became hereditary Lords; and by the 1870s the sixth Lord Massy, John not Hugh, was in possession of 33000 acres in three Irish counties.

In the final decades of the nineteenth century the Massys began to withdraw from . I don’t know why, I’m afraid; but the lands were all sold off by 1900, and the last of the houses from which they ruled their vast Irish domains in the early years of the twentieth century. It’s almost as if the Massy family were never there …
Posted by Heart of the Wood at 07:30

Email ThisBlogThis!Share to TwitterShare to FacebookShare to Pinterest
Labels: Massy