I wrote earlier about Brodie Gurney and the trial of the assassin of Prime Minister Perceval in 1812. I’ve since noticed that it was something of a family tradition. Eight years later Brodie’s brother, my great great great great uncle John Gurney, was a key player in the trial of the would-be assassins of Perceval’s successor, Lord Liverpool. Apart from anything else, I had no idea ’s relatively recent political past had been quite so unstable. 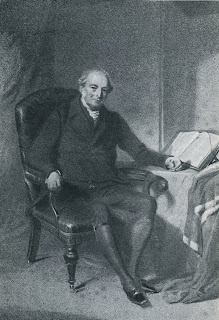 The end of the Napoleonic Wars in 1815 was followed by cycles of famine and unemployment, and a groundswell of radical feeling that the nation’s wealth should be distributed more equitably. This climaxed in 1819 with a huge rally at St Peter’s Field in which was brutally dispersed by sabre-wielding cavalrymen. Up to 600 people were injured or killed.

The Peterloo Massacre as it became known was swiftly followed by the enactment of six new laws designed to restrict any sort of assembly which might be perceived as a threat to public order and political stability. Ordinary people were shocked at the violence, and the introduction of the repressive Six Acts only fuelled the anger and hunger of radical groups for change. One such group resolved that the only solution was the assassination of the Prime Minister and all his cabinet, and the establishment of a new revolutionary government.

They thought they had found their opportunity when they got wind of a dinner to be held in London on at which all their targets would be present. But the dinner was an invention, fed to them by an infiltrator in their midst, and as they gathered in an attic in Cato Street to commit the assassinations, the whole group was arrested.

John Gurney was appointed the counsel for the prosecution of two of the conspirators at their trial, Richard Tidd and William Davidson. He was a thoughtful man, either open to new ideas or fickle depending on your point of view – he was a supporter of the French Revolution who was disappointed by its subsequent military tyranny, a religious Dissenter who became a member of the Church of England, a Liberal who became a Conservative. He was made King’s Counsel in 1816, perhaps in part as a result of having performed well as an assistant to counsel in the prosecution of John Bellingham eight years earlier. 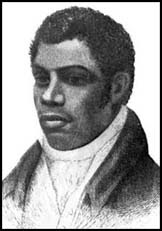 Tidd was a failed shoemaker and Davidson a failed cabinet maker. Davidson was a Jamaican who’d studied Law in and Maths in . He spoke eloquently at his trial: "It is an ancient custom to resist tyranny... And our history goes on further to say, that when another of their Majesties the Kings of England tried to infringe upon those rights, the people armed, and told him that if he did not give them the privileges of Englishmen, they would compel him by the point of the sword... Would you not rather govern a country of spirited men, than cowards? I can die but once in this world, and the only regret left is, that I have a large family of small children, and when I think of that, it unmans me."

He accused the Court of racial prejudice – more or less, “Is it ‘cos I is black?” But the fact that Davidson had been in Cato Street, and had earlier taken a blunderbuss out of pawn in preparation for the planned murders, rather counted against him. All eleven conspirators were convicted, and such was the outrage of the Establishment at their crimes that they were sentenced to be hung, drawn and quartered, a rather medievally brutal version of the death penalty. 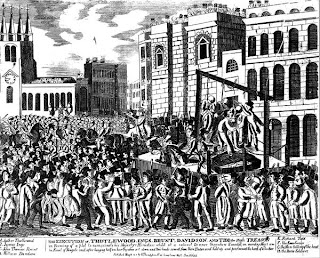 The hanging of the Cato Street conspirators
Highgate Prison, 1st May 1820

In the end some of the guilty had their sentences commuted to transportation, and the rest were merely hung, on 1st May. There are lurid eye-witness accounts of the occasion; Tidd, a large man, was expected to hang easily, but didn’t. Davidson “ascended the scaffold with a firm step, calm deportment, and undismayed countenance. He bowed to the crowd, but his conduct altogether was equally free from the appearance of terror, and the affectation of indifference,” a dignity not showed by all the men: one, James Ings, was rather too tunelessly defiant in his singing of 'Death or ', and the ringleader Arthur Thistlewood said, "Be quiet, Ings; we can die without all this noise."

John Gurney’s successful prosecution of the case made his name. In 1832 he was knighted and appointed a Baron of the Exchequer. The government used the trials to defend the introduction two months earlier of the Six Acts. But the Observer newspaper defied the government order not to report the proceedings of the trial before the sentencing. And in the whole sequence of events led directly to the establishment in 1821 of a new liberal newspaper, the Manchester Guardian.
Posted by Heart of the Wood at 07:30

Email ThisBlogThis!Share to TwitterShare to FacebookShare to Pinterest
Labels: Gurney