If you were ever a stamp collector, you’ll remember those Starter Packs you used to be able to buy – plastic bags of stamps from all over the world, none terribly valuable, just a random handful to get you off the ground and give you something to put in your new stamp album.

When my uncle John died, his widow passed on to me all his family memorabilia. His brother, my father, had always stressed the male line, but from John I suddenly had a wealth of ancestral material which had been passed to him by his mother. It was like the Best Starter Pack in the World … Ever!

It included the mid-nineteenth century contents of Captain Charles Castle’s writing desk and other historical (even historic) correspondence, Uncle John’s own genealogical notes, books written by or about or belonging to family members going back hundreds of years, and of course and photographs. I had Faces! Places! Handwriting! Lives! Who WERE all these people?

As I write this I remember what I felt then, the energy and excitement of a schoolboy stamp collector, but I ought to confess that I was in my thirties when I received all this stuff. Still, all these new genealogical clues sent me off like an excitable pack of young hounds in all manner of directions looking for answers. Some I’ve found; in some cases, I haven’t even had time to turn over the paper and read the question yet. 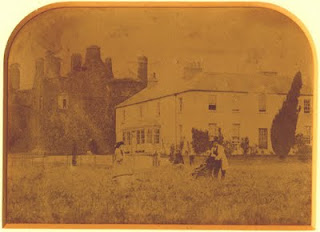 One of the most exciting early puzzles was a picture of a castle, at which of course my eyes lit up. I mean, what young boy DOESN’T hope to find a castle somewhere in his family’s past?! The castle led in fact to several more as I uncovered a great swathe of ancestors amongst ’s Protestant Ascendancy. But the real clue was the scrawled note on the BACK of the picture, written in two different hands. 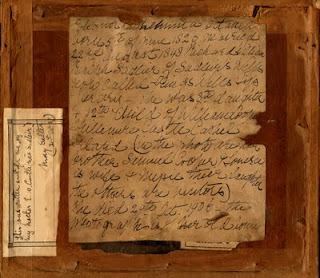 Four generations, and four family names, laid out for me: William Cooper; his son Samuel (and family) and daughter Eleanor who married Richard Sadleir; their daughter Eleanor Sadleir who married a Castle; and her daughter May who married a Salter. It was a fantastic kick-start to get my family trees growing, and I was hooked. The rest, as they often say, is history.
Posted by Heart of the Wood at 07:30