In 2010 I went to Leamington Spa in search of my great great grandfather’s grave. The local Parks and Cemeteries Department were very helpful and supplied me with a plot number and a map – of the wrong cemetery. I stood there baffled, at the graveside not of Reverend William Augustus Salter but of some other John Doe, until I figured out what must have happened.


The Parks Department came through however. With no time to post me the right map, they guided me towards the correct cemetery and grave by phone, in the manner of ground crew helping a passenger land a stricken airliner.


It was not a dignified spectacle. As they zero’d me in on the memorial in question, I got more and more worked up, leaping over other graves and shouting excitedly into the handset – “Yes, I can see a chapel. Yes, I’m on the left hand of the two paths! YES, a pair of yew trees ten yards back on the right!! OH! THERE IT IS!!! HOORAY!!!!” – while scattered groups of bereaved parents and children knelt quietly here and there placing flowers and communing with the dead. 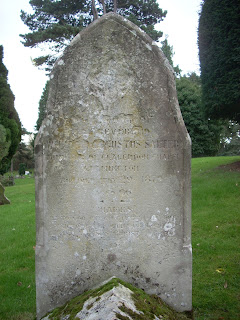 
And then I burst into tears. For three years I’d been researching the life of this man who died a hundred and thirty years ago, and here I was, face to face at last with him and his wife and daughter. I hadn’t brought flowers, but I gave them all our news, took lots of photographs and transcribed his inscriptions. I was sad to leave.


On my way back to the car, I happened to pass the gravestone of Mary Salter Browne. She was at that time not a known relative; but Salter isn’t a common name, so I made a note, took more photos and transcriptions, and looked her up when I got home. 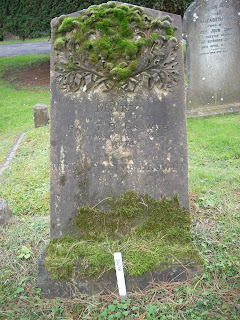 
IN AFFECTIONATE REMEMBRANCE OF
MARY
WIDOW OF THE LATE
REV T.B. BROWNE
WHO DIED 10TH DEC 1864
AGED 74
AND OF THEIR DAUGHTER
MARY SALTER BROWNE
WHO DIED 14 DEC 1906
IN HER 84TH YEAR
AND OF
EMILLIE ANNIE BROWNE
WHO DIED 20TH DEC 1938
AGED 84 YEARS
REJOICING IN HOPE, PATIENT IN TRIBULATION,
CONTINUING INSTANT IN PRAYER    ROM XII 12


Mary was a niece of my great horticultural ancestor John Salter of the Versailles Nursery in Hammersmith. Her mother, his sister Mary, married the Rev Thomas Bulman Browne, who died aged only 43 in 1825. Mary Salter Browne, only three when her father died, remained dutifully unmarried to be her mother’s companion, and the household was increased in mid-century by the arrival of her young nieces Alice and Emillie. (One report names a third niece, Charlotte.)
The nieces’ mother had died young in 1854, and their father soon afterwards emigrated to Australia, leaving his sister Mary in loco parentis. This role she fulfilled with great success, inspiring much love and affection from her “daughters”, who lived with her until her death, just as she had with her own mother.


Mary and her nieces made ends meet, like so many spinsters, as teachers at Beech Lawn College in Leamington of which Mary was principal. Emillie was an art mistress and Alice a gym teacher and “Professor of Dance”. (Charlotte, the only reference to her says, taught English.)

The title page of That Colony of God, the only novel which Alice published under her own name


Late in life Alice blossomed in an entirely different direction, as a novelist. In 1891 she published The Rector of Amesty under the pseudonym John Ryce – the last two letters of her and her aunt’s first names. She followed it with two more novels, An Oath in Heaven (1903) and That Colony of God (1923). I’ve read the opening chapters of Oath – it begins very racily with an accidental murder – and the dedication of Colony (written after the death of her beloved aunt) is “to the dear memory of Mary Salter Browne 1823-1906.” If further evidence of the affection in which Alice held Mary were required, she published their correspondence in 1911 under the title You and I Together Love.


Neither Mary, Alice or Emillie ever married. Alice died in 1936 and Emillie two years later.


Some information here comes from Troy Bassett’s excellent site about Victorian novelists, At The Circulating Library.


This is my 200th post on Tall Tales from the Trees. Although I don’t have any of Alice’s novels at time of writing, I have inherited many books which have been handed down from father and aunt to son and daughter, nephew and niece through the generations. I am now writing my own book, which pulls many of these articles together in what I hope is a cohesive narrative of a bigger story of the books and the family. It arises from the books they wrote, read and gave each other, and in the more illustrious cases the books of which they were the subject. It also looks at the spiritual zeal for education which drove many generations of my family.
Posted by Heart of the Wood at 07:30 1 comment: