My 4x great grandmother Rebecca Brodie “had not the gift of large resources,” her son William Brodie Gurney observed, “but my mother knew how to set others to work, and made the most of what she had.” She was born in Nottinghamshire to Paisley parents, and I imagine a persuasive, talkative, cheerful woman: William wrote that she spent the last ten months of her life, when she had been diagnosed with cancer, visiting friends and relatives to tell them that she would “soon be shut up!” 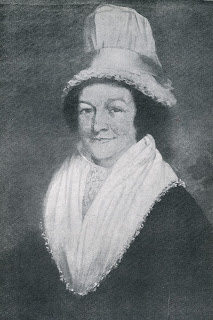 Rebecca (Brodie) Gurney (1744-1814)
Around 1787 Rebecca prevailed on her neighbours in Walworth, South London, with greater resources than hers to set up a Girl’s Charity School. She played a very active part in the running of it, and also in the organisation of a Maternity Society which she set up there. Thirty years after her death in 1814, William was still meeting people whose lives had been touched and changed by her activity.
The girls’ schoolteacher was encouraged to extend the school’s activities to include religious instruction every Sunday, and he was offered a penny for each child attending on a Sunday, up to a maximum of thirty pupils. Unsurprisingly attendance at the Sunday school ran at a steady thirty week after week after week, netting the teacher a regular extra income of half a crown. When, as was expected of a pious young man, William Gurney went along to volunteer one Sunday in 1795, he found a less than spiritual reason for the full classroom. If ever there was a shortfall, the teacher sent his son out on the streets to round up extra children with the promise that they wouldn’t be kept long – just long enough to have their heads counted by the chapel treasurer.
William took over the running of the Sunday school and his success there led to the founding of the Sunday School Union eight years later. William’s son in law William Augustus Salter met his future wife, Gurney’s daughter Emma, while volunteering at a Sunday school run on Gurney's lines. Salter would go on to found two schools himself, and in 1860 Emma, without doubt inspired by her grandmother’s Maternity Society, set up the first ever Mother's Meeting in Leamington Spa.
Posted by Heart of the Wood at 07:30