Amongst the hundred or so pieces of family and business correspondence belonging to my 3x great uncle Charles, which were passed to me by his great great nephew John, is a delightful thank-you note.
It’s from Charles’ niece Julia Jenkins. The Jenkins and Castle families were Bristol neighbours connected by marriage at various points along their respective family trees. Julia’s parents were Richard Jenkins and Charles’s sister Julia Castle; Richard’s parents were Richard Jenkins the elder and Mary Naish Castle, who was actually a (much older) first cousin of Julia Castle. So Julia Jenkins’ Castle grandmother was also, I think, her first cousin once removed. 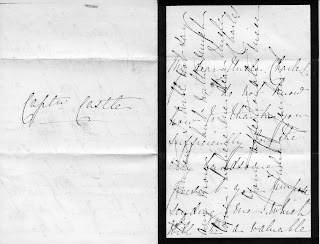 Julia Jenkins’ thank-you note
As some of Charles Castle’s other correspondents did, Julia Jenkins saves paper by writing in two directions on the same sheet rather than starting a new page. It works surprisingly well, although it’s a trick that requires very neat handwriting and wouldn’t work so well I think with a modern, more rounded style of lettering.
My dear Uncle Charles,
I do not know how to thank you sufficiently for the very handsome present you propose sending me, which will be a valuable addition to my plate to which you have contributed before. It was indeed most kind of you to think of me, and I shall value the grape scissors doubly from their having belonged to your dear Grandmamma.
From the selection of the present, it is evident you expect me to possess someday a grapery and hothouse of my own, and when that time comes I promise you an early invitation to partake of the fruit of the vine. As Mamma has written, I will not say any more, but with much love, believe me dear Uncle Charles,
Your affectionate niece
Julia Jenkins
The letter is undated, probably from the mid to late 1850s. Julia Jenkins was born in about 1838 and became Mrs Francis Charlesworth Kennedy in late 1862. I don’t know which of Charles’ grandmothers she is referring to, but his mother Mary (Morgan) Castle died in 1856, so perhaps he was here passing on a treasure which Mary had inherited from her mother. The writing is graceful and the language good-mannered, slightly stilted, reminiscent of the thank-you letters I wrote as an awkward young man. I like this letter because in a few short lines it hints at all these lines of enquiry. Mainly though, I think I like it because of Julia’s polite delight at the prospect of owning a pair of antique grape scissors. 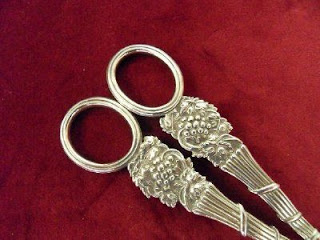 Silver grape scissors
by William Eley and William Fearn,
London 1815
Posted by Heart of the Wood at 07:30