My distant cousin George Verrall changed his name to George Vernon when he became an actor. “Mr Vernon,” recalls Henry Dickinson Stone in his 1873 memoir Personal Reminiscences of the Drama, “was one of nature’s noblemen, a gentleman of the old school, highly educated, and a dramatic artist of the very first order.” (George Vernon was the name of a member  of the Lord Chamberlain’s Men, the early seventeenth century theatre company associated with William Shakespeare.)
He emigrated to in in 1827 in the company of the Fisher family, actors all. What a fascinating bunch! Like the Verralls, a Sussex family: two brothers and four sisters, all marinaded in theatre from an early age by a librarian father Frederick George Fisher who was obsessed with Shakespeare. 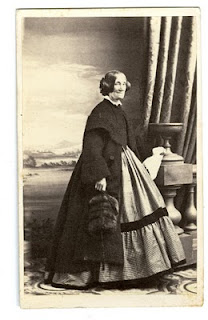 Jane Merchant Fisher, Mrs Vernon (1796-1869)
Jane Fisher, the eldest, was a tall woman with a slightly pinched but expressive face who became one of 's greatest comediennes, having made her stage debut at ’s in 1817. She was probably also the reason that William Verrall made the trip – they married soon after their arrival in .
John, her eldest brother also achieved a reputation as a versatile comic actor. Amelia, who possessed a high order of musical and dramatic ability herself, quite the stage in 1840 to run a dance academy.
Caroline, one feels, had rather been bullied into joining the theatrical profession. She never pursued it in , opting instead for domestic life as the wife of a newspaper editor. Charles, the second youngest of the family, acted briefly in the before founding a weekly magazine for sports and the dramatic arts called “Spirit of the Times.” He did marry an actress however, and their daughter, known as Little Clara Fisher, took to the stage with a beautiful voice.

Clara Fisher, later Mrs Maeder (1811-1898)
(not Little Clara Fisher!)
Little Clara was named after her aunt Clara, the youngest of the six children of Frederick Fisher. Aunt Clara had been a child star long before she came to at the still-young age of 17. After her debut in 1817, aged 6 alongside her older sister Jane at , she was hailed (according to her New York Times obituary) as “the most wonderful child that the stage had known, and her popularity became at once very valuable in a pecuniary sense to her father. George IV went to see her act.”
Starting anew in she rose to even greater fame in everything from opera to comedy. People named their babies, race horses, hotels, brands of cigar, steamboats … even whole city blocks after her! She made and lost fortunes, and by reinventing herself as a character actress she was able to carry on working until ten years before her death, becoming known as “the oldest actress alive.” 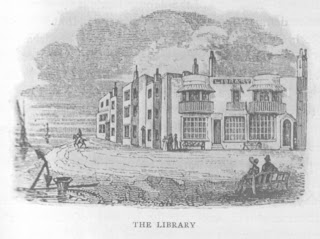 Frederick Fisher’s Library in Eastbourne, c1795
I don’t know whether the Fishers’ father came with them to . He used to sell books and stationery in and was later an auctioneer in . An amateur actor himself, he had without doubt pushed his children into the life he wanted for himself. And a little piece of him does exist in the , as an exhibit in the in – a series of papier mache models of Shakespearean locations in ! Shakespeare's birthplace, the famous mulberry tree and so on. Frederick made them in 1830, perhaps for the Second Royal Gala Shakespeare Festival in that year.
How his handiwork ended up in Philly I don’t know. Souvenir-buying American tourists were presumably thinner on the ground in upon in 1830 than they are now! Perhaps he sent it to one of his theatrical children in the States to remind them of their roots and their Shakespearean father. Or perhaps, if he did emigrate himself, he made it in to remind himself of the roots of his great passion for the bard.
Posted by Heart of the Wood at 07:30