Charles Verral was a brother of the 3x great grandfather of my great aunt Helen Verrall. What does that make him in relation to me? Remote, at least. He dropped the second L of his surname, unlike most of his relatives, including his father, but that was the least of his eccentricities.

He was born the seventh son of Richard Verrall (with two Ls), landlord of the White Hart Inn in Lewes, Sussex. Since an older brother William inherited he running of that establishment (see my earlier post about his ground-breaking cookbook), Charles was initially given a job as master of the George Inn in nearby Arundel, benefiting no doubt from his father’s connections with the local landowner the Duke of Newcastle. 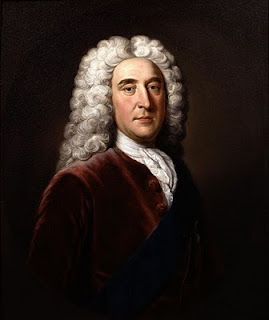 Thomas Pelham-Holles, 1st Duke of Newcastle
was serving as Prime Minister of Great Britain
at the time of Charles Verral’s letter to him
and may not have given it his full attention

Charles Verral (one L) may not have had his brother’s or his father’s gift for hostelry: in 1760 he had to write to the Duke to beg for a position for his son in the Duke’s household. Charles went to great lengths to talk up the high level of education his son had received, and laid on with a trowel his gratitude for the Duke’s many kindnesses to him and his family. Unfortunately I haven’t yet been able to find out whether his high prose had the desired effect for the fifteen-year-old boy.

From here on I can do no better than quote from “The Verrall Family of Lewes,” a 1916 article from Vol 58 of the Sussex Archaeological Collections, which in turn quotes from an October 1790 article published in a monthly magazine called The Topographer, snappily titled “Journal of a Short Excursion Up the River Arun, with an Account of Batworth Park, Warningcamp and Burpham.”

In around 1770, at the age of 50 Charles seems to have obtained a lease of the site of the old chapel at Warningcamp, which he enclosed. He pulled down the remains of the chapel and built a “singular habitation” on its floor, which he called New Jerusalem. Here he lived a “sort of hermit’s life … suffering scarcely any body to come near him, not even to make his bed, or provide the common necessaries of existence.” 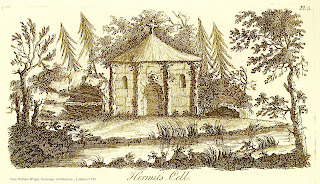 A Hermit’s Cell
from William Wright’s “Grotesque Architecture,”
published in London in 1790

And that, unfortunately, is all we know. Perhaps it’s enough. Of his four children, a daughter Lucy married a vicar, that son (also called Charles) may have prospered in the service of the Duke of Newcastle, another daughter Mary we only know from her baptism record; and Henry his delightful youngest son became an eccentric cricketing doctor and writer of facetious letters to the local paper The Lewes Journal, including the splendid 1811 article “A Short Essay on Firing a Lame Horse.” Of Charles the Hermit, nothing more is recorded.
Posted by Heart of the Wood at 07:30

Email ThisBlogThis!Share to TwitterShare to FacebookShare to Pinterest
Labels: Verrall