George Verrall (1800-1830) is a cousin so distant that it’s hardly worth mentioning the fact. But although he died young he packed a lot into his short life, and it’s a pleasure to remember him here.
George was the son, grandson and great grandson of men called George Verrall, and he even had a half-brother also called George (from his father’s second marriage). His father must have thought that the future of the name was secure, but as fate would have it the half-brother died in 1843 at an even younger age, 21, than the George I’m writing about today. Both died before their father and neither had any children.
One or other of these sons painted portraits of their George Verrall father and grandfather which, just to complete the confusion, were inherited by a nephew of theirs. The nephew’s name was, I’m afraid to say, George Verrall. This last George (1848-1911) also died without children, and the whereabouts of the paintings is, to me at least, unknown. 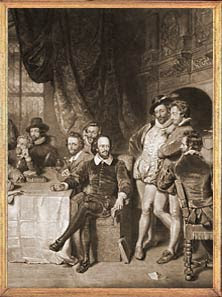 Shakespeare relaxes with the Lord Chamberlain’s Men,
one of whose names George Verrall took as a stage name in tribute
With so many George Verralls to confuse the historian, I’m rather grateful that the George I started this post with changed his name to George Vernon when he became an actor. “Mr Vernon,” recalls Henry Dickinson Stone in his 1873 memoir Personal Reminiscences of the Drama, “was one of nature’s noblemen, a gentleman of the old school, highly educated, and a dramatic artist of the very first order.”
As George Vernon he emigrated to in in 1827 in the company of the Fisher family, actors all. What a fascinating bunch! Two brothers and four sisters, all marinaded in theatre from an early age by a librarian father George Fisher who was obsessed with Shakespeare.

married one of them, Jane, soon after their arrival in . She and her brother John joined him in forming a theatre company when he took over as actor-manager of the struggling South Pearl Street Theatre in the town. He turned its fortunes around over two seasons. He probably also devised the scenery, because elsewhere in the town he demonstrated a flair for architectural design – he worked on Albany Town Hall, and the pulpit of St Paul’s Church in the town. (Proof perhaps that he was the George Verrall who painted those portraits of George Verrall and George Verrall.)
But the strain of holding the reins at the theatre took its toll on George Vernon’s health. He lost his singing voice, and became too ill to act. He bought and retired to Woodstock Farm outside the town (now an animal sanctuary) where he died in 1830 only three years after arriving in . 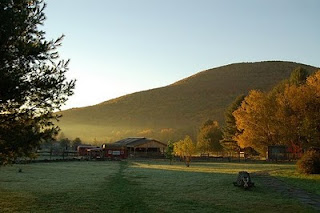 Woodstock Farm, south of Albany NY
As Mrs Vernon, his widow achieved considerable success as a comic actress. “Though never noted for her beauty,” reports an 1880 history of theatres, “she possessed an intelligent and expressive face, and a polished manner, that' at once denoted the woman of intellect and refinement. She was tall and till the last possessed a graceful figure. Her education was liberal, and it was said that during her connection with the Park theatre, her opinion, in all passages of disputed readings of the Shakespeare dramas, was considered final.”
It sounds as if she did her father (and her husband) proud, and she wasn’t the only one. More on the rest of the Fisher acting dynasty in my next post.
Posted by Heart of the Wood at 07:30