What’s not to like about Lechmere Guppy! Tattoo’d school inspector, once-shipwrecked son-in-law of a refugee from the French revolution, furniture-making almanack-founder, civil engineer by trade and palaeontologist by passion, agnostic map-maker, author on molluscs … and then there’s That Fish. Lechmere was a cousin of my 3x great uncle Thomas Richard Guppy. The Guppys are an extraordinary family, and I not going to let the fact that I am only related to them by marriage stop me from writing about them here. Thomas Richard’s mother and father were both inventors, whose achievements certainly inspired their son to his own significant contributions to civil engineering. Lechmere’s lawyer father was the mayor of San Fernando in Trinidad; and his artist mother was a pioneering photographer who navigated the Orinoco River with the help of some local Indians.

He was without doubt a tremendously inquisitive and open-hearted character. His daughter Yseult Bridges said he “loathed deceit, disloyalty, dishonesty and cant; felt all men should find work well done its own reward." And A.D. Russel, writing only six years after Lechmere’s death, described him, “apart from his contributions to scientific periodicals, lectures etc … [as] a man of remarkable individuality. Tall, gaunt, white-haired, grey-bearded, rugged in speech, combative in his opinions. A whiff of cold air seemed to go with him wherever he went. Watching him stride over the savannah, one imagined a Yorkshire moor.” 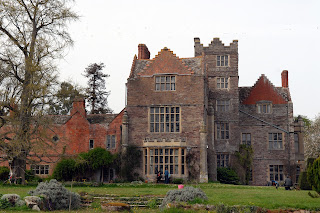 Kinnersley Castle, Herefordshire: Elizabethan remodeling of a defensive castle built on the Welsh borders in the reign of Henry I

With his parents living in Trinidad Lechmere was raised by his grandparents back home in England in a 12th century Norman castle, Kinnersley, not in Yorkshire but in the Herefordshire Marches. Ignoring expectations that he would remain there as an adult to run the estate, he instead sailed away from England at the age of 18.

Two years later in 1856 he was shipwrecked on North Island, New Zealand, “living [according to Yseult] very happily amongst the Maoris who had rescued him, roaming the hills and forests, collecting specimens, and thoroughly enjoying himself. Although this was at the time of the Maori Wars, they treated him with great hospitality, and to the end of his life he loved to talk of his adventures with them, and to display the tattoos on his back – of various designs including a sailing canoe – and on his wedding finger – a ring! He had left only just in time, he declared, to avoid marrying the chief’s daughter.”

Lechmere also mapped the region during his two-year stay with the Maoris, and in 1858 sailed to Trinidad to join his parents. There he married Alice Rostant, a creole descendent of French aristocrats who had fled to Trinidad to escape the bloodbath of the French Revolution. Lechmere became Trinidad’s first Superintendent of Schools and spent the rest of his time pottering about the West Indies studying their geology, fossil remains and marine molluscs (a subject I’ve written on in the past). 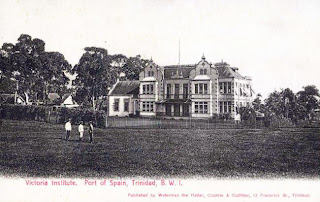 He founded the Victoria Institute in Port of Spain in honour of the Queens Golden Jubilee in 1887. It’s now a national institution, as is the Trinidad Almanack which he began in 1866 with his brother Francis – it was later adopted by the government and became Trinidad’s official Year Book.

1866 was also the year he discovered a new fish in the waters around Trinidad. He sent it off to the Keeper of Zoology at the British Museum who named it Girardinus guppii in Lechmere’s honour – the Guppy fish. It was later found to have been discovered separately and earlier in off Venezuela by another naturalist Wilhelm Peters and named Lebistes reticulatus (now reclassified as Poecilia reticulate). But the popular name for the fish remains the Guppy.

Email ThisBlogThis!Share to TwitterShare to FacebookShare to Pinterest
Labels: Guppy