I have written here before about the role my ancestors played in the founding of London University. Baptists and other non-conformists, who were barred from graduating at Oxford and Cambridge, England’s only two universities, decided to start their own. My 3x great grandfather Samuel Salter bought a £100 share in the proposed institution and his son my 2x great grandfather William Augustus Salter was in the very first intake of students, studying Latin and Greek. 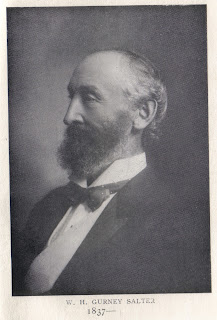 William’s son, my great grandfather William Henry Gurney Salter, followed in his father’s footsteps. He went to Amersham School (“for the sons of liberal gentleman”), where his father had been a Baptist minister; and then he too studied Classics at London University. Like his father, WHGS began his working life in the office of a London merchant. But in 1859 he joined the firm of Gurney & Co, shorthand writers; and in 1872 he succeeded his uncle Joseph Gurney there as Official Shorthand Writer to the Houses of Parliament, a post he held for over 40 years until his retirement in 1912.

On his death The Times printed a lengthy obituary, a measure of his long service at the heart of British political life. It dwelt of course chiefly on his professional and religious achievments; but there is a short, delightful passage about his personal life:

He was a great lover of poetry and pictures, and was a man of many friends; friendship played a great part in his life. Since the death of Sir John Rotton, K.C., he must have been the last of a small band of classical scholars known as the "Totle", who used to meet weekly to read Aristotle and other Greek authors, and who included in their number Theodore Waterhouse, Lord Cozens-Hardy, Lord Justice Kennedy, James Anstie, K.C., and Sir W.H. Winterbotham.

What a wonderful picture! The great and the good of the day, taking time out from their public schedule to share a laugh and a glass of something over some Greek philosophy with Alexander the Great’s tutor! Apart from anything else, it’s a rare bonus to be presented with a list of your ancestor’s friends. WHGS’s Totle circle were obviously important enough figures to be name-dropped in The Times, so who were they?

Brigadier General Sir John Rotton, K.C., (not pictured) WHGS’s last fellow Totler died in 1926. He served on the Council of London University from 1869 and donated his library, including several important theological tracts, to it on his death. Rotton and Salter were born in the same year, and perhaps went to school and university together.

James Anstie, K.C., was also born the same year as WHGS, and also an alumnus of London University, for whom later he was an examiner in common law and practice. He was called to the Bar the year Salter joined Gurney & Co. His wife was Annie Winterbotham, sister of fellow Totler William Winterbotham.

Sir William Howard Winterbotham (1843-1926) was a neighbour of WHGS in Ladbroke Terrace, Kensington. He was not just another solicitor, but from 1895 The Official Solicitor to the Supreme Court of Judicature. Fellow Totler James Anstie married his sister Annie.

Sir William Rann Kennedy, Lord Justice Kennedy (1846-1915) was another prominent legal mind of his day; a failed Liberal candidate who ordered a by-election after accusations of Liberal bribery in Maidstone in 1900. A caricature of him in Vanity Fair in 1893 (the year after he was appointed) is captioned “our weakest judge;” but he was created a Lord Justice of Appeal in 1907 and a Privy Councillor two years later.

Herbert, Lord Cozens-Hardy (1838-1920), another alumnus of London University, was a lifelong friend of WHGS. Their connection went right back to their time together at Amersham School. Herbert’s daughter Hope married WHGS’s nephew Richard Austin Pilkington, and to this day at least one member of the Salter family uses the legal firm of Cozens-Hardy. Herbert was Master of the Rolls, the second most senior judge in Britain after the Lord Chief Justice.

It’s a legal Who’s Who of late nineteenth and early twentieth century England. Salter himself was called to the Bar at Lincoln’s Inn in 1874, although he never practiced. His Greek texts remained in the family until the death of my father, himself a Classics scholar and lecturer. Hooray for the Totle! 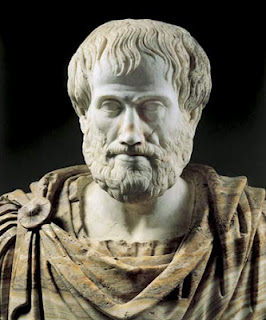 Aristotle, Museo Nazionale Romano, Rome
Roman 2nd century BC copy of a Greek 4th century BC original
Posted by Heart of the Wood at 07:30