Why do I write about all these people? Sometimes it’s because I know they have a story worth telling. Sometimes I pick on someone precisely because I know nothing about them – it’s a way of forcing myself to look deeper into their lives. Sometimes you think there just must be a story, and only by starting to write can you tease it out of them – it’s like thinking aloud to know what you’re thinking.

The flag of the East India Company
before (above), and after the 1800 Act of Union

Granted its Royal Charter in 1600 to trade in the sub-continent, the Company exploited its trade monopoly to become the administrative power in large parts of India. It operated more or less beyond the control of the British government for 100 years, making its owners, British merchants and aristocrats, very wealthy men. Only after the Indian Mutiny of 1857-8 was the British Crown forced to assume some direct responsibility for the colony.

This was all after William’s time. He was a quartermaster in the Army, responsible for the purchase and distribution of supplies of all kinds. It was position from which he was able to generate a great deal of personal wealth, setting up a number of private commercial enterprises to boost his basic army pay. When he came home to Cork (in Ireland, another British colony) on leave in 1796, he splashed out a massive £2500 on a large estate in nearby Glanmire. There he built a well-appointed mansion which, after the manner of the times, he named Fort William.

Generating wealth wasn’t Baker’s only enterprise. In Calcutta in 1785, he arranged the christening of Eleanor, his lovechild with an Indian mistress. It’s not clear whether he brought either or both of them back with him in 1796, but he certainly returned to Calcutta for another tour of duty from 1800 to 1806. When he finally came home to Ireland, it was to make a “suitable” marriage, in 1807, with Mary Towgood Davies.

Mary, daughter of a protestant minister, took over the running of the Fort William household. As one may readily imagine, she was keen to give William a fresh start, a break with the past. It’s known that one Dean Mahomet, an Indian guest in the house, left very quickly at this time.

What became of Eleanor, and indeed her mother? One report I’ve read says Eleanor, now 22, got married to a James Swayne. I can’t find any confirmation of this; but one of William and Mary’s many children (at least eight, some say twelve) was christened James Swayne Baker. Another, rather surprisingly, was called Eleanor Davies Baker. 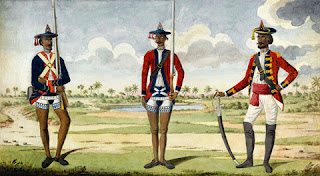 Troops of the Bengal Army c1785

In writing about Eleanor I came across the remarkable Dean Mahomet, and learned more about my 5x great uncle Godfrey. (More on them in a future posting.) But Eleanor is the story I wanted to tell here. Such Anglo-Indian relationships were no doubt common; and no doubt wives were expected to accept the past and present affairs of their husbands. But to call your children James Swayne Baker and Eleanor Davies Baker is a sign either of a very understanding wife or of a very insensitive husband. Since I first posted this I have learned that William did indeed bring home his lovechild, named (according to my source) not Eleanor but Eliza; and Eliza did marry James Swayne, in 1814.
Posted by Heart of the Wood at 07:30