Is it possible for a family tree to have black sheep? Shouldn’t they be black leaves? Or are black sheep only found in genealogical database fields? Whatever. Walter Masterman, my second cousin twice removed, is turning into my favourite black sheep. He’s the man who in his fifties began a successful career writing pulp fiction, after an extremely checkered past which culminated in a spell in prison.

I have now read some of his racy 1920s crime novels, and I wrote about the many phases of his life here once before. They are full of remarkable changes of direction; but I was unaware, when writing then, of yet another strange episode in which he was closely evolved during his time on civvy street between the Boer and Great Wars.

Walter, who had fought in South Africa and lost a brother to disease there during the Second Boer War (1899-1901), struggled to find a role in civilian life. He and his brother Charles briefly took over the running of an ailing boys’ school, Horsmonden in 1903. But by 1905 it had gone bust, and Charles had begun to pursue a successful career in Liberal politics. Perhaps given some introductions by Charles, who was already established as a writer, Walter dabbled in journalism – his no doubt authoritative report “Plaice Fisheries of the North Sea” appeared in 1909.

He also involved himself in the very early days of the Boy Scout movement. Lord Baden-Powell held his first experimental scout camp in Dorset with 20 boys in 1907; his Scouting For Boys magazine was published in six fortnightly parts the following year, and prompted boys to form scout troops all over the country, the core of the new Boy Scout Association. 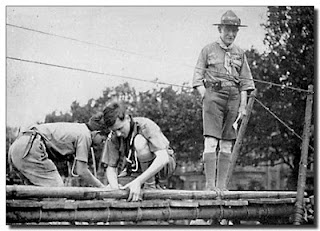 Baden-Powell’s reputation at the time rested on his Boer War role in the defence of Mafeking during its long siege by the Boers 1899-1900. The principles and techniques of scouting which he had learned with the British Army in South Africa were the inspiration for his new movement. But there were many who felt after the war that its ideals were altogether too militaristic.

On Empire Day, 24th May 1909, an alternative and explicitly pacifist scouting organisation was launched, The British Boy Scouts. Its formation was led by a troop in Battersea which withdrew from Baden-Powell’s Association in protest at its army-style administration and the undue influence over the organisation of the National Service League, which campaigned for compulsory military conscription. 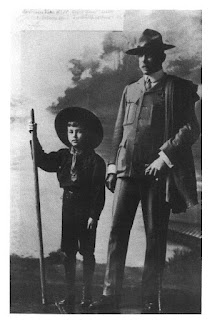 What began as a small breakaway protest became by the end of the year a full-blown schism, following the sacking by Baden-Powell of his London Commissioner Sir Francis Vane. Vane had dared to express his concerns about militarism from within, with the support of some 300 fellow scoutmasters, most of whom now followed him to the British Boy Scouts. It seems likely that one of those scoutmasters was Walter Masterman. Vane, who became Grand Scoutmaster of the BBS in 1911, promptly appointed Masterman in a specially created post of Assistant Grand Scoutmaster.

Vane bankrolled the organisation’s early expansion, supplying a London office and organizing the supply of uniforms while founding a new Order of World Scouts (in which he was ahead of Baden-Powell). Unfortunately Sir Francis overextended himself. When his income proved insufficient to cover the cost of uniform manufacture, he was declared bankrupt in August 1912. He resigned both his Grand Scoutmastership and the Presidency of the organisation, which he had held since 1909. 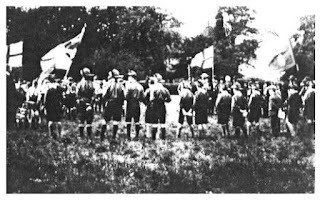 The BBS was thrown into confusion by the loss of its driving force (and the London office which he had provided). A vengeful Baden-Powell rejected Masterman’s request for BBS troops to return en masse to the Boy Scout Association in a corporate affiliation. Instead he insisted that each troop must apply individually for Association membership.

Fearing perhaps the imminent demise of the BBS, Masterman accepted this condition and led the eight BBS troops under his direct control back into the Association fold. Although the move was regarded then and now as a defection and a betrayal, Masterman’s troops included Junior Scout sections which he now introduced to the BSA for the first time. The idea spread and in 1916 became the BSA’s Wolf Cubs – I was a Cub in the 24th Glasgow Troop in my 1960s youth! – known today as the Cub Scouts. 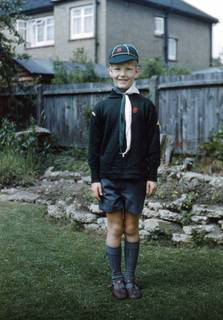 A British Wolf Cub in the 1960s (not me!)
descendent of Walter Masterman’s Junior Scouts
(picture from Wikipedia)

Masterman’s commitment to the pacifist BBS seems at odds with his continuing role during those years as an Inspector of Musketry attached to the 1st Cadet Battalion of the King’s Royal Rifles, a quite explicitly military unit for boys. When war broke out in Europe two years later, he returned to active service and by all accounts fought for his country with distinction. Returning to civvy street again after the armistice in 1918, he lost his way once more until – after a four year jail term – he built a successful writing career in the final 20 years of his life.

At its height in 1910 one in three boy scouts in Britain was a British Boy Scout. Thanks largely to the international network set up by Sir Francis Vane, the BBS survives to this day, and there are once again several British BBS troops, led by Grand Scout Emeritus Dr Michael Foster. Dr Foster has done a great deal to preserve and record the history of the BBS and this article owes much to his writings.
Posted by Heart of the Wood at 07:30