Norwood Manor Day Nursery in Lambeth, London, describes itself as occupying “an old listed mansion.” I haven’t discovered the building’s full history, but I do know that it  didn’t start out as a mansion. 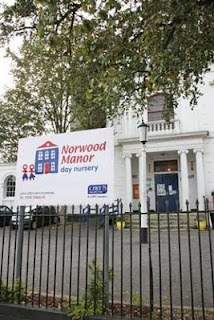 Norwood Manor Day Nursery in 2009,
and its listed railings
It’s built on land which was originally parcelled out by the commissioners in 1810 to one Benjamin Shaw, following the Lambeth Inclosure Act of 1806. This was one of a series of second-wave parliamentary enclosures designed essentially to rationalise the many awkward strips of wild or waste land cluttering up the country and make them more productive or useful. I don’t know Mr Shaw’s story; but in many cases, and perhaps his, commoners were given an alternative piece of land if they owned or used one which was being enclosed. (The history of English enclosure is complicated and controversial. It is seen by some as depriving the peasant class of previously held land rights and forcing them to become, in effect, the urban proletariat; and by others, as a necessary step in making land management more efficient and viable for those with the capital to invest in it, in effect giving rise to capitalism.)
I digress. Benjamin Shaw saw the opportunity for a quick profit and sold the land on, to my 4x great uncle William Salter. William, a pious Dissenter, donated it in 1819 for the building of West Norwood Congregational Church. It was a generous, virtuous act; but it was one for which he didn’t complete all the necessary paperwork. When he was taken seriously ill two years later, a fine chapel and schoolroom had been erected but the land still technically belonged to William. And so therefore did the buildings now standing on it; and William was now so unwell that it didn’t look as he would live long enough to make the proper legal transfer of ownership himself.
So, on the 6th June 1821 he hurriedly wrote a new will. But it did not, as you might expect, leave the land to the “Society of Protestant Dissenters of the denomination called Independents of the Calvinistic persuasion,” as he called them. Instead, he left it to his wife Mary Elizabeth and his two brothers David and Samuel, on condition that they give the land and buildings to the church; and then only on condition that the land be used and enjoyed for worship by the said society “and for no other use or purpose whatsoever.”
Quite why William couldn’t bequeath the land directly to the church is beyond me. Perhaps there were legal restrictions on bequests to dissenting denominations. But William died only two weeks after making the arrangement, and as far as I know his will was executed according to his wishes. He was only 51.

West Norwood Congregational Church
The church is a handsome neo-classical building with wings which housed school rooms. It still stands today as the Norwood Manor Day Nursery, and no doubt its founders and the donor of the land would be pleased that it is still playing a role of provision for children. In 1981 its low forecourt walls and the original tall plain spearhead railings were given Grade II listed status (although not as far as I can tell the building itself). But that bit about it only being used for Independent Calvinistic worship seems to have fallen by the wayside. I wonder if anyone has noticed?
Posted by Heart of the Wood at 07:30