For at least five generations, the Tough family lived and worked in the tiny triangle of Scotland defined by Larbert, Falkirk and the village of Dunipace. They were blacksmiths and joiners, skills very much in demand at the largest local employer, the giant Carron Ironworks. Directly or indirectly the works sustained a massive and thriving economy in the densely populated central belt of Scotland, driving the emerging industrial revolution. There was work and opportunity for all.
You would think there was no incentive to travel out of the area, but my great great grandfather John Tough was out of the country at least twice. The first time was without his consent or knowledge! John’s father (also John) was a roadside blacksmith, and for a few years in the 1840s he found himself working 250 miles away “down south,” in Staffordshire.
I don’t know what took him there. It’s very tempting to imagine that it was in some way connected with that English cradle of the industrial revolution, Coalbrookdale, home of Abraham Darby’s ironworks just over the county border in Shropshire. Darby’s pioneering techniques had inspired the founders of Carron.
Certainly it was a Shropshire barmaid, Betsy Vaughan, who caught John Senior’s eye and who fell for his Scottish charm. They married, and their first three children, including John Junior, were born in Staffordshire. So by the time the family returned to Dunipace (in time for the 1851 census) John was already well travelled.
By 1861, at the tender age of 12, John and his 9-year old brother David were in harness as footservants for the rather grander Gilchrist family up the road in Airth. But as soon as he was old enough and strong enough for hard manual work he started at the local sawmill – first, stoking the steam-driven engines which hauled the logs and drove the circular saws, and later operating the machines himself.
It was responsible and relatively well paid work. In time John married Grace, a girl from nearby Grangemouth, and raised his own family (including my great grandfather, another John). He could afford little luxuries and even save a little money for special occasions; and in the 1890s he took the family away on holiday, to Northern Ireland. 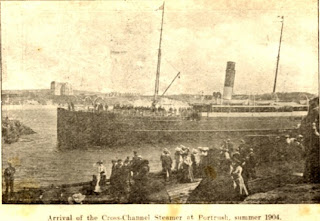 The cross-channel steamer from Glasgow arriving in Portrush (1904)
Although excursions had been growing in popularity and availability since their introduction by Thomas Cook in 1841, a journey from Dunipace to the Giant’s Causeway was still quite an undertaking. Those less well-off would settle for the daytrip “doon the watter” by paddle steamer from Glasgow to Dunoon. 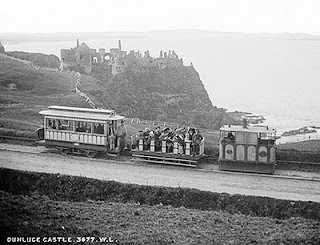 The Giant’s Causeway Electric Tramway passing Dunluce Castle (1890)
But until the First World War a steamer service carried more affluent Scottish holidaymakers direct from Glasgow to Portrush, the resort town for the Giant’s Causeway. In the last two years of the service, 25,000 passengers travelled in each direction. John would have had a journey of several trains to take him as far as Glasgow, and a tramline from Portrush Railway Station ferried holidaymakers to the Causeway itself. 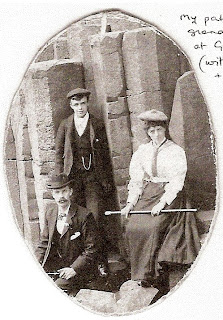 John Tough (b. 1849) seated, his son John (b. 1879) standing
and a daughter (probably either Grace or Bessie)
– Giant’s Causeway, 1890s
However well travelled my great great grandfather was, it must have been the holiday of a lifetime.
Posted by Heart of the Wood at 07:30