I have so far avoided the cliché that every picture tells a story. It seems to me more the case that there are many pictures that don’t explain themselves – that need someone to tell their story for them. A photograph of a big cake decorated with the words “Happy Golden Wedding Anniversary John and Jean Piper” is clear enough; but what on earth, for example, is going on here? 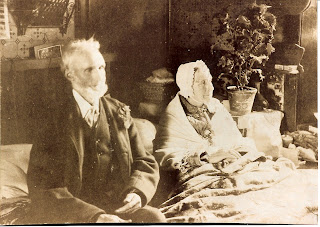 John and Jean Piper on their golden wedding anniversary, 1917
John Piper and Jane Farquhar Reid, my great great grandparents, sitting in a bed! They were married in Sorn in Ayrshire in June 1857. It was something of a shotgun wedding, and their first child Mary was born the following September. Nevertheless, it was an enduring partnership, and their ruby wedding anniversary in 1897 was an occasion for a great family celebration. 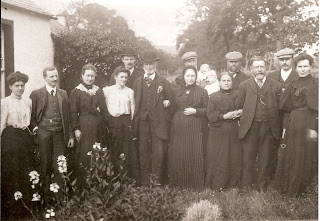 John and Jean Piper’s ruby wedding anniversary, 1897
Joining them in the lane behind Barshouse, their home in Sorn, were (for the record), L-R:
Anne Gavine who the following year married their son James; their son Tom (see my earlier post about his bicycle shop); Kate Reid who married their son William; Maggie, who would marry bicycle Tom six years later; their son James, my great grandfather (see my post about his whisky warehouse); John and Jean at the heart of things; behind them John’s brother James (who would die only two years later); Jane’s sister Margaret and her husband (Mr Kirkland); behind them John and Jean’s son William; and the Lymburners (who we know were related somehow to John or Jane!).
That’s the story of that picture. But what about the first one? It’s reputedly John and Jane’s golden wedding anniversary, although it’s also reputedly “around 1918,” which would make it their diamond anniversary instead. It doesn’t matter: the date isn’t the story. Why were they celebrating it with a risqué two-in-a-bed anniversary photograph in their 70s or 80s? The truth, and the story of the picture, is this: Jane was confined to bed, not by age or love but by a cow which had kicked her a few days before.
That’s not the story of John and Jane’s marriage of course. When Jane died in 1920 (at Barshouse, and probably in that bed) their shotgun marriage had lasted 63 years. No doubt it had its ups and downs, but the fondness which started it all persisted to the end. John died only a year later.
Posted by Heart of the Wood at 07:30