I was writing recently about the history of Suir Castle and its Massy family occupants, which I have been putting together with the help of several people who got in touch via this blog. One of them sent me this snippet of Irish life as reported in Hansard, the official record of proceedings at the British Houses of Parliament.
27th March 1882
SIR WILLIAM HART DYKE asked Mr Attorney General for Ireland, if his attention had been called to the position and case of Mr F Massy, of Suir Castle, Golden: whether it is true that, at the request of the Government, Mr Massy gave a piece of ground for the erection of a police hut; whether in consequence of this loyal act, he has been Boycotted, and deserted by his domestic servants and farm labourers; and whether the Government intend to take any steos for the relief of Mr Massy, and to supply him with assistance to work his farm, now out of cultivation owing to his loyal aid offered to the Government?
THE ATTORNEY GENERAL FOR IRELAND (MR W.M. JOHNSON) The Chief Secretary requests me to inform the right hon. Baronet that his attention has been given to the position and case of Mr Massy, of Suir Castle; that it is the fact that Mr Massy, at the request of the Government gacve a site for the erection of a police hut; and that, in consequence of this act in the interests of law and order by Mr Massy, he has been “Boycotted,” and has been deserted by his domestic servants and by his farm labourers. I have only to add that the Chief Secretary will see that anything in the power of the Government shall be done to alleviate Mr Massy’s position.
Francis Massy, who owned Suir Castle House and its surrounding 330 acres of farmland,  was descended in a different branch from my 5x great grandfather Hugh, First Lord Massy - his great grandfather. It’s a fascinating little exchange in Hansard, not least because it uses the word Boycotted. These days it’s a very familiar idea, the withdrawal of economic support for political ends. But in 1882 the expression was only two years old, having arisen from a situation exactly like Massy’s. Captain Charles Boycott was a ruthless land agent in Co Mayo. When he began evicting tenants for non-payment of rent (they had asked for a reduction because of a bad harvest), the whole community ostracised him: farmhands refused to work his fields, shops would not serve him, tradesmen wouldn’t come to his house, the postman even refused to deliver his mail. 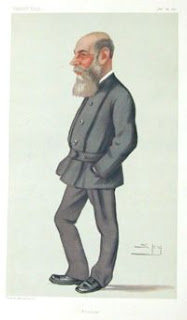 Captain Charles Boycott (1832-1897)
It wasn’t an isolated action, but the first implementation of a policy devised by Charles Stewart Parnell for the Irish National Land League. The Land League aimed to stop evictions and reduce rents. Its tactics were to boycott landlords, and also anyone who applied for the tenancy of a farm from which a landlord had evicted the tenants. Its leadership came up with the verb “to boycott” because they didn’t think the ordinary Irish people would understand the word “ostracise.”
I don’t know whether Massy’s application for assistance was successful. Charles Boycott used the British press to draw attention to this new tactic by the Irish Nationalists. A Boycott Relief Fund was set up and well supported. A force of 50 Orangemen from Co Cavan was dispatched to Co Mayo to save the Captain's harvest, protected from violent protests along the way by around 1000 policemen and a regiment of troops. The whole operation cost around £10,000, for the sake of salvaging Boycott’s crops which were subsequently valued at about £350.

Police guarding the Orangemen’s camp
at Lough Mask House, Boycott’s home, November 1880
It seems unlikely that, two years into this Land War (which lasted until 1892), Massy’s plight would have attracted the same support. The Massy family had come to Ireland with that enemy of Irish nationalism Oliver Cromwell, and seem to have done little to ingratiate themselves with the local population in the intervening 200 years. According to my correspondent, they “had a reputation for being very difficult and tough landlords. Evictions were apparently common and there was quite a bit of ill-feeling towards them amongst the locals.” He had spoken to someone who told him a story of a barracks on Francis Massy's land being blown up, resulting in repercussions for the locals. Offering a piece of land for a police station to suppress the Land League will not have improved Massy’s standing in the community.
A nice little family footnote to this story – the notes for Hansard were being taken by my great grandfather William Henry Gurney Salter, who was Official Shorthand Writer to the Houses of Parliament at the time. Massy and Salter bloodlines would meet in the following generation!
Posted by Heart of the Wood at 07:30