In 1584, my poor old 12x great uncle Ralph Sadleir was hauled out of statesmanlike semi-retirement by Queen Elizabeth I to fill the post of gaoler to Mary Queen of Scots at Sheffield Castle – a Very Important Prisoner indeed. Unfortunately for him his military and administrative prowess, his familiarity with Mary’s ways and above all his unswerving loyalty to his own Queen made him the obvious man for the job. At the age of 77, only his years of active service can have given him the strength to prepare himself and 43 of his own men for the weeklong ride north from his home at Standon in Essex, just outside London, to the small provincial town of Sheffield. 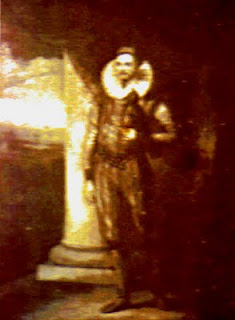 Sir Ralph Sadleir (1507-1587)
statesman, gaoler and hawking enthusiast
The journey exhausted him, but barely a week later he was on the move again, to Wingfield Manor fifteen miles away. It was not a suitable prison: Ralph declared that he would rather defend Sheffield Castle with 60 men than Wingfield Manor with 300. But Sheffield was swarming with conspirators, and Mary’s chains of communication with them needed to be broken. The transfer of his own retinue and the 47 staff and servants of Mary’s household took a full day: Ralph was bone-weary, and Mary, 35 years his junior, suffered badly from gout. 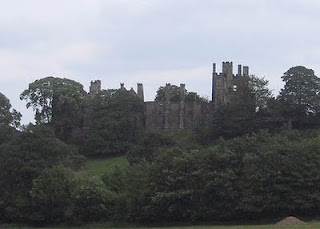 Wingfield Manor, Derbyshire
exposed to the elements
Wingfield was cold and damp, east-facing on heights above the River Amber in Derbyshire and exposed to harsh winds at the onset of winter. Despite Elizabeth’s assurances that Ralph’s was, in view of his age, a temporary appointment, he and Mary remained at Wingfield for four months. They were virtually prisoners of each other while Elizabeth tried to find a more permanent gaoler. Both Mary’s and Ralph’s health declined during their time at Wingfield.
In desperation Sir Ralph arranged yet another transfer in January 1585, to Tutbury Castle, a two-day winter journey away in Staffordshire. Tutbury was considerably more secure than Wingfield; and Sadleir was able to address its many short-comings of comfort because as part of the Duchy of Lancaster, the castle was under his own control. As winter turned to spring he allowed Mary, who shared his passion for hawking, to join him on days of sport beyond the castle walls. 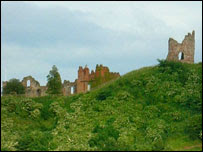 Tutbury Castle, Staffordshire
a good base for days out
In spite of what might be called their professional relationship – she a captive Scottish queen, he an English queen’s gaoler – they were fellow travelers. Ralph had held the baby Mary in his arms 43 years earlier; and both must have sensed on some level that they were coming to the end of their respective roads. Mary was running out of options, Ralph simply running out of years.
When in April 1585 Elizabeth finally found a successor to Sir Ralph, it was Sir Amyas Paulet, a strict Protestant who allowed Mary none of the comfort, freedom and friendship she had enjoyed with my uncle. Within a year she was embroiled in the Babbington plot which led to charges of her conspiracy against Elizabeth. The commission which eventually signed her death warrant included a loyal but heavy-hearted Sir Ralph, unable and unwilling to protect his friend when she threatened his queen. Mary was beheaded on 8th February 1587. Sir Ralph died of natural causes on 31st March, less than two months later. 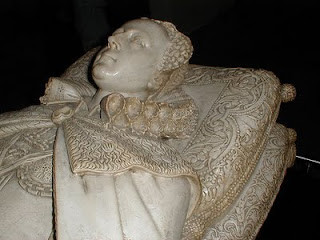 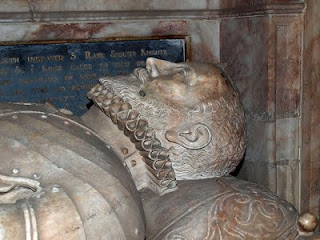 The tombs: Mary Queen of Scots in Westminster Abbey
and Sir Ralph Sadleir in Standon
“Our Man in Scotland,” Humphrey Drummond’s biography of Sir Ralph Sadleir, from which I learned a lot about Uncle Ralph’s time with Mary, is now out of print but very much worth tracking down secondhand.
Posted by Heart of the Wood at 07:30

Email ThisBlogThis!Share to TwitterShare to FacebookShare to Pinterest
Labels: Sadleir