I wrote about my cousin Austin Cooper once before. He was Canadian, but served with the Black Watch Regiment during the First World War. With them he went through four years of trench warfare in some of the grimmest confrontations of the conflict including Passchendaele and Ypres. At the latter he survived a gas attack which killed many of the 60,000 Canadians lost in the war. 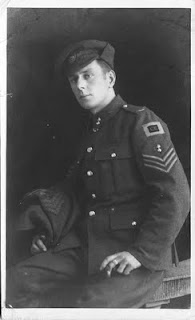 Austin Cooper was discharged in 1919
with the rank of Regimental Sergeant Major
In peacetime Austin was an artist. Between the wars he settled in England and made his mark as a poster designer, mainly for transport operations such as London Underground and the London Midland and Scottish Railway Company. For my money his best work was for the London and North Eastern Railway, LNER.
In later years he moved towards modernism and cubism, and eventually gave up poster design altogether in favour of completely abstract paintings. But in the 1920s and 1930s he produced several series of themed travel posters for the company including one for literary destinations called The Booklovers’ Britain, and this one, Old World Market-Places.

Old World Market-Places, 1927
Norwich, Boston, Barnard Castle and Knaresborough
It’s a beautiful set of stylized woodcuts, a nod to a medium recently repopularised by Noel Rooke and others. Cooper was a master of the type face too, and I think his design here particularly suits the graphic style of the images.
I don’t know whether there were any more destinations in the series. The Upper Teesdale line which served Barnard Castle is long gone. But Boston, Norwich and Knaresborough all still have railway stations. I'm a sucker for a market town, and all four (and particularly my soft spot Barney, as we used to call it) are still well worth the trip that Austin Cooper’s artwork was urging over 80 years ago.
Posted by Heart of the Wood at 07:30