V.I.P. in this case stands for Very Important Prisoner. My 12x great uncle Ralph served under four monarchs, in some of the highest offices in the land – at the end of his career he was Queen Elizabeth’s Treasurer and Privy Counsellor. After his retirement, one of his very last duties for the Virgin Queen was as the reluctant gaoler of Mary Queen of Scots. 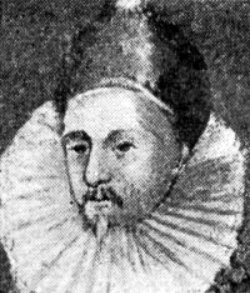 Sir Ralph Sadleir (1507-1587)
soldier and statesman
Sir Ralph had known Mary almost all her life, having been dispatched by Henry VIII to Scotland to arrange her marriage to Henry’s son Edward, Prince of Wales in March 1543 when Mary was less than four months old. Shown the baby at Linlithgow Palace that month, Sadleir had declared, “It is as goodly a child as I have ever seen of her age.” But when war broke out between England and Scotland later that year, Ralph served his English monarch loyally in what became known as the “rough wooing” of the Scots. For his part in the crushing defeat of the Scottish army at the Battle of Pinkie Cleugh in 1547 Sir Ralph received his knighthood.
Although Mary was crowned in 1543, (her father James V having died when she was just six days old,) Scotland was ruled by regents throughout her minority. When the last of them, Mary’s mother Mary of Guise, died in 1560, Mary took charge and refused to ratify the Treaty of Edinburgh negotiated that year by Sir Ralph and others. The treaty was intended to force Scotland to end its alliance with Catholic France and to recognise Elizabeth I as queen of Protestant England. But Catholics regarded Elizabeth as illegitimate; and as Elizabeth’s Catholic cousin, Mary (by now Queen consort of Francis II of France) was next in line. 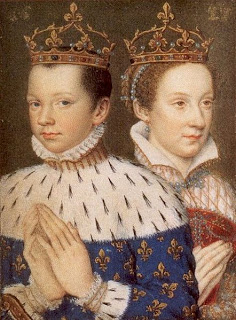 Francis II, King of France, King consort of Scots,
and Mary, Queen of Scots, Queen consort of France
c1558, after Francis Clouet
Mary’s desire to unite the thrones of Scotland and England under her own Catholic regime dominated the rest of her life. She was the focus of innumerable plots to that end, by Catholic factions and nations as interested in their own agendas as in hers. For his part Sir Ralph was a religiously tolerant man, but implacably opposed to any move which might result in the surrender of English sovereignty, especially to the French.
When Mary fled to England in 1568 following her forced abdication of the Scottish crown, she became a big political problem. Civil War was a distinct possibility, and in 1569 Sir Ralph was dispatched to squash a Catholic rebellion by the Northern Earls of Westmorland and Northumberland. Mary meanwhile was being moved from castle to castle to keep her out of reach of conspirators and rescuers. She was a compulsive plotter, always planning new schemes and alliances to restore her to one throne or other. The job of gaoler to Mary Queen of Scots was a stressful one, only made possible by a network of vigilant spies and counter-spies. 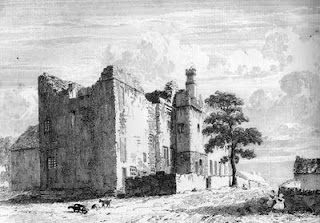 Sheffield Castle (now demolished)
as it looked in 1819
In 1584, poor old uncle Ralph was hauled out of statesmanlike semi-retirement by Elizabeth I to fill the post temporarily at Sheffield Castle in Yorkshire. Unfortunately his military and administrative prowess, his familiarity with Mary’s ways and above all his unswerving loyalty to his own Queen made him the obvious man for the job. At the age of 77, only his years of active service can have given his the strength to prepare himself and fifty of his own men for the week-long ride north from his home at Standon in Essex, just outside London, to the small provincial town of Sheffield.
How would the man, whom Mary Queen of Scots had described 12 years earlier as “grave and ancient,” fare when pulled back into her world of intrigue? Come back next week and find out!
Posted by Heart of the Wood at 07:30

Email ThisBlogThis!Share to TwitterShare to FacebookShare to Pinterest
Labels: Sadleir