STEPHEN SALTER (1825-1896) AND THE ALLITERATIVE ARCHITECTS

Parents just love alliteration, don’t they? In my Salter family tree there are countless Samuel Salters and Sarah Salters and Sophia Salters – and a positive explosion of Stephen Salters. This, parents of the future, is not helpful to us genealogists. If anyone reading this can help sort out the following, please do.
I was going to write a nice short post about my cousin Stephen. His great grandfather, also Stephen Salter, is my 4x great grandfather. I was just going to write about the fact that my cousin was an architect, and hope that I got lucky on Google in finding some building or other that he worked on.
Well, you go looking for one Stephen Salter, architect; you find three! There was plenty to go at on Google, and my admiration for a man with such a long and varied career crumbled around p15 of the search results when I noticed that many of the buildings I was looking at had been built long after my cousin’s death. Nothing’s ever simple. 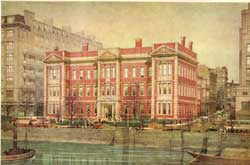 Who designed this building?
a)  Stephen Salter, b) Stephen Salter, or c) Stephen Salter
(Examinations Hall and Laboratories
of the Royal College of Surgeons and the Royal College of Physicians)
I already knew that cousin Stephen’s father, b. Hammersmith c1801 (who I suppose is also a cousin, and is definitely, and inevitably, also called Stephen Salter) was also an architect. The father started out as an architect’s modeller, and at some point his son must have joined him in the practice – two sons in fact. Cousin Stephen’s brother Frederick Thomas Salter (c1830-1866) was an architect too, from at least the age of 21 until his untimely death.
Is it confusing things to mention at this stage that cousin Stephen had a son b. Wesminster c1859, also called Stephen, who mercifully was not an architect but a physician surgeon? I think not, because his medical career rules out the possibility that this third generation is responsible for the buildings designed after cousin Stephen’s death.
Instead, I have found a Stephen Salter b. Ryde on the Isle of Wight 1861, who was also (yep) an architect and was also (yep) “son of Stephen Salter.” Pretty sure he’s not one of mine, but further proof of parental fondness for the alliterative arts. 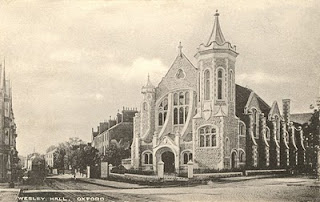 Who designed this building?
a)  Stephen Salter, b) Stephen Salter, or c) Stephen Salter
(Wesley Hall, now Cowley Road Methodist Church, Oxford)
So there we are: three architects, three Stephen Salters (or six if you include all the ones I’ve mentioned who were mere relatives of architects). The next problem is to sort out who designed which building – and there was a period in the 1860s and 1870s when all three were alive.
I think that’s enough for now! More confusion next week when I list the buildings I know about and try to allocate them to the right architect. (Some pretty impressive buildings, by the way.)
Posted by Heart of the Wood at 07:30