Henry Bayley was a first cousin of my great great grandmother Ellen Bayley. With his brothers William and Charles he inherited the family cotton mill, Bridge Street Mill in Stalybridge, Cheshire, from his mother. In the 1830s they set about a programme of improvement and expansion, building a new operation on the other side of the river Tame on a plot of land called “The Stakes," which became known as Bayley Street Mills. William and Charles eventually withdrew from the business leaving Henry in charge. 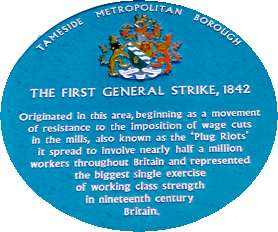 I know nothing of Charles at all, I’m afraid. But William (who features in Benjamin Disraeli’s novel Coningsby) was the Bayley responsible for triggering a national General Strike by his intransigent response to the Plug Riots of 1842 (see my earlier post). It is little wonder that he chose to play a less active part in mill ownership, having made himself so deeply unpopular with the workforce.

Henry, I feel, could not have been more different in temperament to his brother. As a young man he showed considerable promise as a musician, which must mark him out as a civilized man! He encouraged other local musicians, and was himself “a player of quality,” promoting several concerts at Stalybridge Town Hall. (By this I reckon he redeemed his brother William’s future role at the building – William became the town’s first mayor when it was incorporated in 1857!)

Henry by contrast was a prime mover in the setting up of the town’s “Gentlemen’s Glee Club.” These glee clubs were a popular feature of middle class life in the mid-nineteenth century, particularly in the towns and cities of northern England. They were originally dedicated to amateur choral performances, although in time they broadened to encompass other art forms. (In Manchester the world-renowned Halle Orchestra can trace its roots to the Manchester Gentlemen’s Glee Club.) Henry Bayley is credited with attracting “several celebrated London actors” to give performances in Stalybridge. 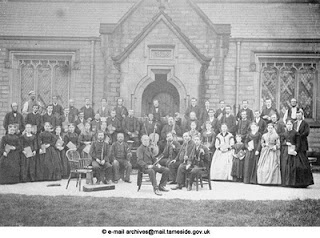 Stalybridge Harmonic Society
(Could one of the musicians be Henry Bayley?)

As if that were not enough, in 1844 he was a chief supporter of the new Stalybridge Harmonic Society, another choral body. This one was formed when the choir of King Street Chapel fell out with their minister! Thereby, surely, there hangs a tale worth digging out.

Maybe he was just driven to save the good name of Bayley in the wake of his brother William’s exploits. As William was serving his third and final term as mayor, Henry was subscribing to the inaugural New Year’s Day Aged Persons’ Tea Party for the over-70s. The event ran from 1860 until at least 1907, when Samuel Hill’s wonderful book Bygone Stalybridge (from which I get most of what I know of Henry) was published.

Sadly I cannot relate whether Henry ever attended the tea party as an eligible guest. He died, suddenly, at the age of 71; so his opportunities were few. But he left a cultural mark on Stalybridge which long outlived him.

(I should mention one other aspect of his life which may also have placed him firmly opposite his older brother William. In 1841, the year before the Plug Riots, Henry was chairman of the local branch of the Anti-Monopoly League, a society connected to the Anti-Corn Law League and to the Chartists whose agitation was behind the riots. When Henry assumed control of the family mill years later, he must have had a very different approach to management and a very different attitude to his workforce.)

Both pictures are from the splendid archive of Tameside.gov.uk
Posted by Heart of the Wood at 07:30

Email ThisBlogThis!Share to TwitterShare to FacebookShare to Pinterest
Labels: Bayley