The advance of non-conformist congregations in the nineteenth century was a grand movement of empowerment for the ordinary people of England. They had for centuries been the little people, the fodder, the also-rans in the hierarchy of English social structure. Their place in society was to know their place, which was below, permanently below, those better than themselves – those above them, the wealthy and powerful.
Gradually it became clear that this social order was not fixed. It was possible to challenge it, to better yourself and change your position in that order. The Church of England of course had no interest in promoting this idea. Its higher clergy were the wealthy and powerful. It was up to the radicals, the Dissenters, to preach Change and a New Order. It was an early example of Liberation Theology. 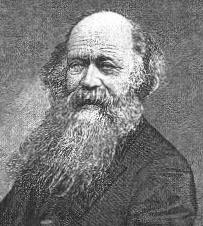 Joseph Angus (1816-1902)
Baptist minister and educator,
engraved by Thomas Armitage in 1890
Non-conformists sought improvement on every level – spiritual, physical and social – and the key to self-improvement, or usefulness as they called it, was Education. My 3x great uncle Joseph Angus embraced this doctrine wholeheartedly. He had a thorough education himself – studying for the ministry at Stepney College in the east end of London, then graduating MA from Edinburgh – and liked it so much that he devoted most of his life to it.
He was appointed president of his alma mater Stepney in 1849, having earlier served for six years as its secretary. He remained at its helm until he stepped down in 1893 at the age of 77. Under his watch the college moved, in 1856, to a new location in Regent’s Park where it became more closely associated with University College London. UCL had originally been founded in 1828 by non-conformists (including my 3x great grandfather) whose sons were excluded from any other English universities. 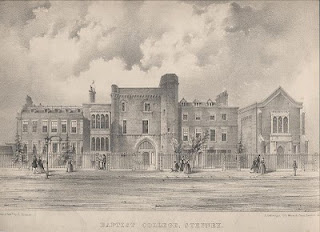 The original buildings of Stepney College, founded 1810
As Regents Park College the institution moved once again, in 1928, to Oxford. It still thrives there, and one of its greatest assets is the incomparable Angus Library, built around his own enormous collection of non-conformist publications. Angus himself wrote prolifically. As well as theological texts his works included handbooks on English Language and Literature, in which he was an examiner much in demand.
He was also an energetic fundraiser. Before his presidency of Stepney he was for ten years secretary of the Baptist Missionary Society, and in that time raised £32,000 to repay debts and expand its missionary operations. At Stepney he raised a similar amount to endow the college with scholarships for its students and professorial chairs for its teaching body. 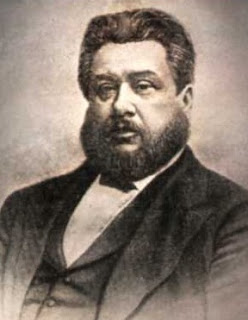 Charles Haddon Spurgeon (1834-1892)
Baptist minister and college non-attender
In one notable instance did Angus’s passion for education not prevail. In 1852 a young man called Charles Spurgeon arranged to meet Angus as president of Stepney College, at which the former was considering enrolling. An absent-minded servant ushered the two men into different rooms within the building, forgetting to tell each of the presence of the other. They never met, and soon afterwards Spurgeon decided not to attend Stepney.
Instead Spurgeon accepted a position as minister at New Park Street Chapel in Southwark, which had been Angus’ own first appointment as a Baptist pastor in 1838. Now he was concerned that Spurgeon should not “settle without thorough preparation. He may be useful in either case, but his usefulness will be much greater, he will fill at all events a wider sphere, with preparation than without it.” 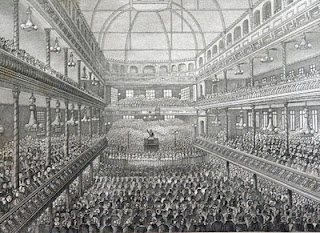 Charles Spurgeon preaching at Surrey Music Hall, 1858
In fact Spurgeon turned out to be pretty “useful,” even without a higher education. He became without doubt the nineteenth century’s brightest Baptist star, a crowd-pulling and charismatic preacher. For him, New Park with its capacity for a mere 1200 worshippers had to be rebuilt as the 5000-seater Metropolitan Tabernacle. Joseph Angus spoke at the first of many memorial services for Spurgeon in 1892.
Posted by Heart of the Wood at 07:30

Email ThisBlogThis!Share to TwitterShare to FacebookShare to Pinterest
Labels: Angus