My most direct connection with the B&ER is something of a mystery. Among the papers of my great great great uncle Charles Castle which I inherited are two letters written in 1857 on B&ER letterheads, to Charles from his brother in law William Harwood, the Secretary of the railway company. I am not very sharp on financial business, but money is changing hands and the South Australian Banking Company is involved. 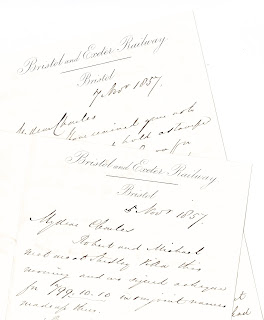 Letters from William Harwood, Secretary of the Bristol & Exeter Railway Company, to his brother in law Charles Castle, 5th and 7th November 1857


Harwood is reporting on a meeting at his home, Studley Villa, with Charles’ brothers Robert and Michael (Michael the deputy chairman of the B&ER). Charles, Michael, Robert and William seem to have opened an account at Baillies Bank with a deposit of around £800; and William has separately loaned the B&ER £400. There is a reference in the first letter to clearing the estate of the brothers’ father, Thomas, who died in 1827. William questions in the second letter, “whether the investment and sale should appear in the Books of your father’s estate or not.”


Is Thomas’s estate only now being wound up? Under what circumstances?


Two letters from the South Australian Banking Company are attached to Harwood’s two, mostly couched in technical fiscal terms. It is about to send £300 to two executors living in Adelaide, South Australia, one of whom “is I believe now on his passage to England.”


Who are they, and whose executors? Through the marriage of Charles, Michael and Robert’s sister Mary Castle to William Edward Acraman, the Castles had Acraman relatives in Adelaide. But it seems unlikely that they would be executors of Mary’s father Thomas’s will. Perhaps there were other antipodean relatives.


Harwood underlines at one point: “All postages and other disbursements in this matter we must take care to pay ourselves because it is quite evident that this money will never benefit William.”

"... because it is quite evident that this money will never benefit William."


My best guess is that the family were selling shares from the estate of their late father in order to lend capital to the B&ER. But why? The B&ER was by all accounts a reasonably successful, profitable company. So why was its Secretary lending it large sums of money? The Board had agreed to borrow up to £2000 from him at 4.5% interest.


The letters I have were written in early November 1857. In August of that year the West Somerset Railway was given the go-ahead by parliament to build a line from the B&ER station at Taunton to the harbour town of Watchet. The proposal had the effect of extending the B&ER’s broad gauge network and the B&ER raised much of the initial £120,000 required to build the new line.


It is entirely possible that the letters from Harwood to Castle were in connection with the WSR. Some say that WSR subscriptions were hard to raise, others that the money was all in by the end of the year. The line itself opened in 1862, and its working was from the start leased to the B&ER. 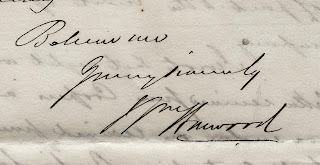 "Believe me yours sincerely Wm Harwood"


Even if the letters are about B&ER involvement in the WSR, they don’t explain the correspondents’ quandary about whether to include the transactions in the estate accounts, or why the unidentified William was being deprived of the benefit the money. Perhaps the approaching Adelaide executor might have had something to say about the matter! We’ll never know, but – as William Harwood, Charles, Michael and Robert would no doubt agree – it’s fun to speculate.
Posted by Heart of the Wood at 07:30