I have regularly celebrated the poster designs of the artist Austin Cooper in these pages. He was a cousin of my grandmother May Castle and I’m proud to claim him as a relative. 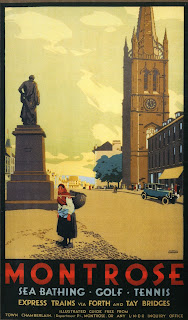 1920s Railway poster for the Scottish east coast town of Montrose, by Austin Cooper, who studied art in nearby Arbroath


His career as a poster artist is framed by the two world wars of the twentieth century, and I am sure he would prefer to be remembered for the fine art which he produced after 1945. At the end of his life he moved away from figurative commercial work altogether and produced a series of emotionally powerful abstract collages.


His career began in the early twentieth century with training at art schools in Cardiff on the south coast of Wales and in Arbroath on the east coast of Scotland. From there he rejoined his emigrated family in British Columbia, with aspirations to be a portrait painter. But at the age of 22 he and a fellow Arbroath graduate (Adam Sherriff-Scott) joined a commercial art studio in Calgary, painting urban landscapes for real estate developers. 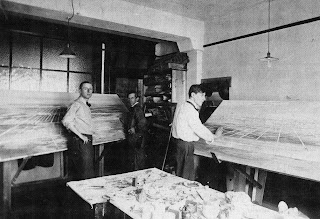 
The pair caused a scandal in around 1913 with a controversial collaborative painting called Christ in Calgary, which depicted Jesus being ignored by crowds on a busy city street. Was it blasphemous or instructive? Enough people paid the 15c admission charge to judge for themselves for the picture to remain on display for six months. I can’t find a reproduction of it, and I don’t know if it still exists. At the time, the Calgary News-Telegram carried the following description of it:
A crowd of hurrying people is on the street hurrying west on the side and corner near the old Royal hotel, and intermingled with this crowd is the Indian, the squaw with her child in a papoose, the lady stenographer with her beau; the lumberman chatting with his companion on the corner, and, leaning up against the wall of the hotel; the policeman talking to a nurse and taking notes on an accident; the mother and her litte girl; the Negro standing unconcerned, and other characters; but the most prominent character in the picture is a large representative figure of Christ standing on the corner of the pavement, while directly in front of him and looking up into his face with a frightened look is a woman of the street, bearing all the characteristics of such a woman, and dressed in red. 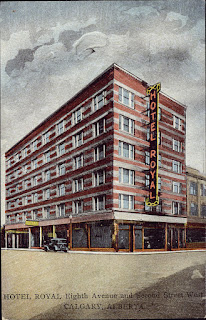 The Hotel Royal, Calgary – a promotional postcard from the 1920s


I have found an artist’s impression of Calgary’s Royal hotel – Scott and Cooper were both employed to paint such impressions, and it’s tempting to think that this is the work of one of them. The style fits Cooper’s. But the picture is dated 1920s, by which time the pair had already moved to Montreal to establish Shagpat Studios, their own commercial outlet. So the image may be of a NEW Hotel Royal which replaced the “old Royal hotel” described in the News-Telegram. In any case this building too has gone, demolished in the early 1970s. If the painting too has now been lost, then thank goodness for the News-Telegram’s vivid description of it.


The headlines of another local newspaper, the Calgary Herald, reflect the debate about the painting’s moral message:
MINISTER ASKED TO INSPECT PAINTING


SUNDAY TEACHER PRAISES IT,
WHILE IDEALIST THINKS IT OVERSTEPS ITS BOUNDS


The owner of the gallery which exhibited Christ in Calgary declared, “The picture is there to teach a lesson. Only the woman of the street recognizes the Christ. [It shows] the people of Calgary hurrying by with their thoughts bent on worldly gain, pleasure and real estate speculation.” 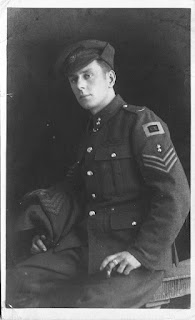 Austin Cooper as a Regimental Sergeant Major in the Black Watch, March 1919


That dig at real estate rather bit the hand that was feeding both Scott and Cooper at Catlett’s studio. It might explain why the pair both relocated to Montreal soon afterwards. But war in Europe soon overshadowed career; and like so many men of the British Empire both artists enlisted – both to serve in the Black Watch. Both survived, but while Scott returned to Canada, Cooper remained in London, first to court his future wife and then to begin a new phase of his career, as a railway poster artist.

This article is in memory of the artist Timothy Ray, a descendant of Austin Cooper, who curated an exhibition of his ancestor's work in 1993. The essays which he wrote for the exhibition catalogue are by far the best source of this and other stories of Austin Cooper's life.
Posted by Heart of the Wood at 07:30