I’ve written up a few of the Old Bailey cases in which my cousin Talfourd Salter appeared as a barrister. He began his legal training in 1851 and must have had mixed feelings about a trial in the Old Bailey which involved his family the following year.

On the one hand, Talfourd was still living in the family home when it was burgled in the early hours of 11th November by two really rather inept thieves, William Rogers and Edward Jenner. Amongst other things, they stole his meerschaum pipe. 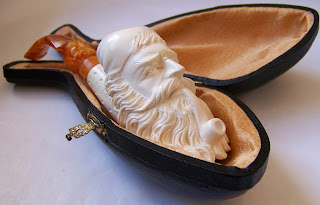 A meerschaum pipe – meerschaum means “foam of the sea” in German, a reference to the raw material from which pipe bowls were carved, a soft white lightweight mineral – magnesium silicate – sometimes found floating in the Black Sea like foam (but mostly these days mined in Turkey)


On the other hand, when the case came to court a month later, it was a chance to watch the law in action from his new perspective as a law student. Perhaps he coached his father, William Davis Salter, who as head of the burgled household was called as a witness.


In fact there was not much to tell. The robbers were caught red-handed at 4.15am by a vigilant bobby on the beat. Jenner legged it out of the back door, and a third member of the gang got clean away, but PC T75 William Weston pursued Rogers, tackled him and delivered him into the custody of William Salter before conducting a thorough inspection of the crime scene. Weston was able to identify Jenner who was later arrested at Marylebone Theatre. 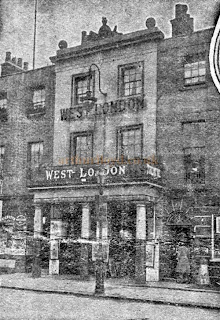 Den of iniquity, the Marylebone Theatre (built 1832, demolished 1959) is regarded as the home of musical hall, famous for the theatrical transformations made possible by its huge stage (pictured here in 1909 when it had become the West London Theatre)


The trio had entered the house through the tiny window, 38 x 18cm, of the downstairs loo. They carefully laid a towel on the loo seat to muffle their entry, then removed their shoes and left them outside the back door to avoid noise and dirt. Still, three men moving about the house with the intention of burgling it seems mob-handed and risky. Although they didn’t wake Mr Salter senior or his daughter Mary Jane, Talfourd must surely have been out of the house at the time.


The thieves moved silently from room to room and even ventured upstairs where they found and took three of William’s coats and a hat from the first floor corridor. In the parlour downstairs they grabbed a dress which Mary Jane had been sewing the previous evening and had left on her chair. They also took her victorine, a fashionable stole-like cape lined with fur, often that of a fox or marten. 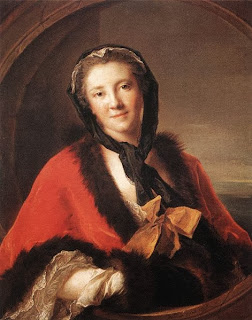 
From the kitchen they stole a toast rack, and from somewhere in the house – Talfourd had mislaid it a few days earlier – his meerschaum pipe. But all of this eclectic swag was found bundled up by the side of the house next to the gang’s three pairs of shoes. I have an image of the footwear neatly set in a row as if waiting for the footman to polish them.


When PC Weston saw three men moving about furtively with a candle through the scullery window he challenged them. “It’s alright, it’s only the servants,” one of them whispered back. But Weston’s shout had woken Mr Salter and as he came out to talk to the policeman, the gang panicked and ran, leaving their shoes and their stolen goods behind. Rogers admitted that one pair was his when he asked Mr Salter if he could have his bluchers back because on that November night his feet were cold. 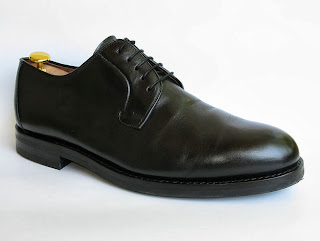 The blucher shoe, whose upper is made from a single piece of leather with overlapping flaps for the laces, is named after Prussian general Gebhard Leberecht von Blücher (1742-1819) who devised such footwear to improve his troops’ feet


Jenner’s guilt was also confirmed by the footwear when, at the police station after his arrest, it was found that a pair of boots left beside Rogers’ bluchers fitted him perfectly - it was a sort of Bad Cinderella moment. He conducted his own defence in court, which consisted mostly of challenging Weston’s ability to identify him through the blinds of the scullery window. William Salter countered Jenner’s argument by pointing out that there were no such blinds. Rogers, caught at the scene and in any case only just out of prison from a six month sentence for stealing a table cloth under the alias William Mack, didn’t have a barefooted leg to stand on.


For their crime of stealing goods to a total value of £5, both men were sentenced to seven years’ transportation. If any of their descendants are reading this now, I’d love to know what happened next.
Posted by Heart of the Wood at 07:30