Allan Macpherson, youngest son of the quartermaster general of Bengal, struggled to make his way in the world when the family’s fortunes collapsed. You can read about his erratic early life in my previous post, here. In Calcutta, at the age of 45, he married Caroline Gibson, with whom the following year he had a daughter Matilda Harriet. When an opportunity to raise the family in England arose, Allan grabbed it; and in 1835 he took up the post of vicar at Holy Trinity, Rothwell.


The early years at Rothwell were without doubt the most stable of Allan Macpherson’s life. At the age of 47 he at last had a family life and a secure income in a comfortable climate. Rothwell was a growing community, thanks in part to the presence of the brewery owned by the Gotch family of Kettering. John Cooper Gotch, head of the dynasty, had also founded a bank which grew out of his financial support for Christian missionaries. The two men must certainly have known each other, and it may have been their friendship which allowed Macpherson to run up debts at Gotch’s Bank of around £3000, a huge sum at the time of the banker’s death in 1852. 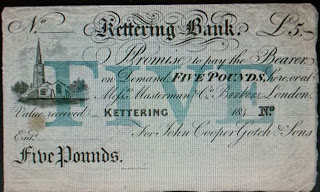 
Was it just comfort buying? Sorrow came back into Allan’s life with the death of his nine-year old daughter in 1843 and of his second wife in the 1850s. His faith must have been sorely tested. In 1852, mindful perhaps of his mounting deficit at Gotch’s, he looked to Europe where he saw money being made through the patenting of inventions and the exploitation of mineral wealth. With the permission, one assumes, of his bishop, Macpherson moved to comfortable apartments in Brussels “to retrieve myself,” and began to speculate with the hope of accumulating. His duties at Holy Trinity were covered by his curate Rev Charles Iliffe Gibbon; and tellingly, he asked the bank to stop addressing him as Reverend in case it cramped his style in this secular activity.


Over the next five years he registered a number of patents – for a fee – in the hope of selling them on for a profit, in the fields of gas supply, motive power and sewage management. He invested in slate, tin and iron ore mines too, and kept the bank informed at every turn (in nearly 500 letters) with assurances of imminent and magnificent returns. Those returns never arrived. When the Kettering Bank finally failed in June 1857, having thrown much good money after bad, Macpherson (now 69) owed it £25,000 – a third of all its bad debts.


Beyond the reach of the law and deprived of the bank’s funds, he turned to family members for support. But if they frowned at his financial dealings, they were appalled by the news that he had fathered a secret child during his time in Rothwell. He married the mother in 1860 and they lived for a while in England, keeping a low profile. But his relatives would have nothing to do with her, and his sister – who had already funded him to the tune of £1000 – turned off the tap. At their last meeting in 1862, Allan could not even afford new clothes. She gave him £5 and six shirts, and he left for Europe where he might live for less. He died in Paris in 1864. 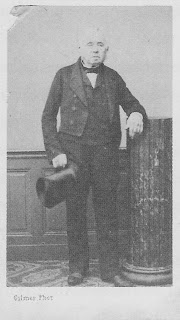 Allan Macpherson (1788-1864), photographed a year before his death (from Stephen Foster’s A Private Empire)


I don’t think Rev Allan Macpherson was a bad man. As a slave owner, minister and speculator he was only following the example of the times and his ancestors. But he was unlucky, weak and ill-equipped to deal with life. His nephew remarked, “There is a great deal of genuine kindness about him – but his utter lack of the smallest fragment of the commonest of common sense makes him in my opinion entirely removed from the list of responsible human beings.”


I found some details of Allan’s life in Stephen Foster’s tremendous book A Private Empire, a history of five remarkable generations of the Macpherson family of which Allan was very much the product and the black sheep.
Posted by Heart of the Wood at 07:30