Not all Tall Tales from my trees are true. My cousin Mark Bloxham Cooper was in his day an eminent Dublin barrister and a Freeman of the City of Dublin. There have always been rumours amongst his descendants of some association with the Irish revolutionary leader Michael Collins. In Butterhill and Beyond, a Cooper family history, author Richard Austin-Cooper briefly expands:
[Mark Bloxham Cooper] was appointed permanent Junior Counsel for the Crown at Nenagh 1897 and Counsel for Clonmel in 1904; he was also Crown Prosecutor at Leinster Assizes, Senior Divisional Justice of the Dublin Met. District 1919-1925, and prosecuted Michael Collins for the British Crown [my italics, not Austin-Cooper's]. 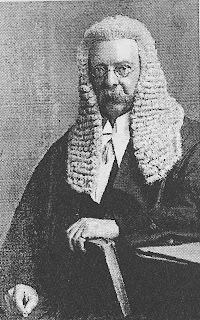 
It’s a connection to a revered leader in Irish history, even if it’s one from the wrong side of the tide of Irish affairs. My Cooper ancestors are all from the Protestant Ascendancy, the implanted English ruling class. And although by Mark Cooper’s time they felt completely Irish having been residents for 350 years and seven generations, when it came to the struggle for independence they were still seen as the enemy.


Ironically, Collins was an English resident until the Easter Rising in Dublin in 1916. He had been living and working in London since 1910, for a succession of financial companies including the London office of the Guaranty Trust Company of New York (now part of the multinational giant JP Morgan Chase). 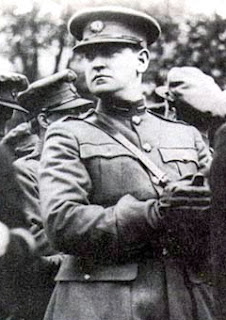 
He returned to Dublin but played by all accounts a relatively small part in the Rising, of which he was a critic because of the indefensible positions taken up by the Irish rebels. He was captured along with many of them, and his minor role may explain why he was not executed, as fifteen Irish leaders were.


Instead he was interned in Frongoch Prisoner of War Camp in Merioneth, in Wales, from which German prisoners from the Great War were hastily evacuated in the wake of the rising. It was a political blunder by the British – Frongoch became known as Sinn Fein University, a place where Irish captives shared revolutionary ideas and organized themselves.  Collins emerged as a leader, and was even able to give classes in guerilla warfare developed from his criticisms of the tactics of the Easter Rising. 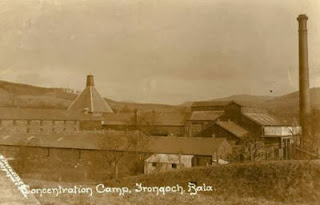 Frongoch Concentration Camp, Merioneth – the British developed the idea of the concentration camp during the Boer War of 1900-1901


At the end of 1916, new British prime minister Lloyd George issued a general amnesty for Irish prisoners and Collins was released with all the other inmates of Frongoch. He became a senior figure in Sinn Fein and played central roles in the Irish War of Independence and the Irish Civil War. He was assassinated on his way to Cork in 1922, and is now a venerated figure in the fight for Irish independence.


Crucially, he was never prosecuted, by Mark Bloxham Cooper or anyone else on behalf of the British Crown. After his release from Frongoch he never faced charges; so the family myth is intriguing. If there is no smoke without fire, then perhaps Cooper prosecuted another leading revolutionary; or perhaps he was preparing a prosecution of Collins when the amnesty was announced.


Perhaps there are papers in a vault somewhere which could reveal the truth of the story. But on this occasion at least, neither Cooper nor Collins had his day in court.
Posted by Heart of the Wood at 07:30