I’m a genealogist, not a gardener. There is a strained joke to be made about roots, branches, family trees, cross-pollination and bad apples; but the pages of the magazine of the Variegated Plant Group of the Hardy Plant Society of Great Britain (where this article first appeared) are probably a better place for it than here. Thanks to Ian Warden, editor of The Sport (the magazine in question), I am however enormously proud to have found an ancestor who left his mark in several spheres of horticultural endeavour, not least the study of variegation. 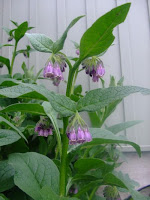 
When I started looking into my family tree nearly 20 years ago, one of the first things I came across in a box of papers was a note from a long dead aunt Emily to my recently deceased Uncle John: “Your namesake was head gardener at the Tuilerie Gardens (until the coup d’état). He came to England bringing his wife (a French lady, whom I well remember), & his 2 children, Alfred & Annie (Mrs Holborn).”


To cut a long story short, dear old Aunt Emily got it wrong on virtually every count. My uncle’s namesake John Salter, a cousin of my great great grandfather’s, was not head gardener at the Tuileries but proprietor of a thriving English-style garden nursery at Versailles. (And Jane his wife, far from French, was born in Reading, Berkshire.) John’s father, a cheesemonger, left money in his will for his children to be apprenticed in the trades of their choice. John chose horticulture, but quite what took him in 1838 to practice his art in French soil remains a mystery. Perhaps the global reputation of English gardens contributed to his success there.


He regularly won medals at the Versailles spring and autumn exhibitions, notably for his dahlias and chrysanthemums. Two of his most successful varieties, Annie Salter (named after his daughter) and Queen of England, both introduced at Versailles in 1847, were still listed in the National Chrysanthemum Society Register over 110 years later. John Salter published his seminal work, The Chrysanthemum: Its History And Culture, in 1865. Original copies complete with their fine colour plates fetch hundreds of pounds now; but it is still available today in a black and white facsimile edition, a measure of its continuing authority. 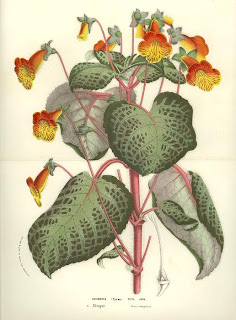 Achimenes picta
as pictured in 1845 by Van Houtte


Of more direct interest to readers of The Sport is the excited headline from the Revue Horticole (Journal des Jardiniers et Amateurs) in 1844. In translation:


FLOWERING OF ACHIMENES PICTA.
Achimenes picta, a new species, will flower for the first time, before the end of September, at the premises of Mister Salter of Versailles (32, Picardie Avenue).


Achimenes picta (Benth. ex Hook) has many modern synonyms – Giesleria picta, Tydaea picta, Diastema pictum, D. vexans, Kohleria amablis var bogotensis. It’s a beautiful flower in trumpet form, the upper half orange-red, the lower half yellow with bold vertical lines of orange-red dots. The leaves, rising from dark red stems, are variegated: deep green, with a silver-grey shading spreading from the midrib and the veins. The earliest illustrations of it which I’ve been able to find are Paxton’s of 1846 and Van Houtte’s of 1845. So in 1844, John Salter’s successful blooms of this Mexican native must have been among the very earliest seen in Europe. Was A. picta Salter’s first brush with variegation? It certainly wasn’t his last.


Perhaps the royalist tendencies indicated by his choice of name for a new Chrysanthemum – Queen of England – were the reason for his hasty departure from France in 1848. When the French King Louis Phillipe was deposed in a coup d’état that year, John was forced to return with his family to his native Hammersmith. There, in William Street he and his son Alfred established a new business, defiantly named the Versailles Nursery. (Indeed, he subsequently created varieties of Pyrethrum and Chrysanthemum both called Versailles Defiance.) 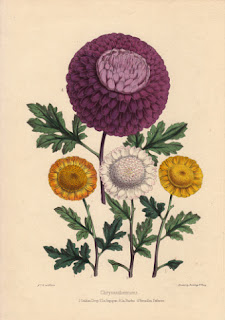 
The new nursery flourished as the old one had. Over the next twenty years his annual display became “an established floral tradition of the metropolis, for it is a show of no mean order. Year by year it becomes more extensive, and at the same time more varied in its details. No description we can give will do due justice to this admirable winter-garden, when seen about the second week in November, just as autumn is merging into winter; and when "The flush of the landscape is o'er, The brown leaves are shed on the way".” (This description is from a feature on the 1868 event in The Gardener magazine.)


As a prolific breeder of new varieties Salter was intensely interested in, and acutely sensitive to, variations in leaf and bud. Given his wide reputation, it is unsurprising that another enthusiast for the process of variation should have joined in a correspondence with him. Who, you may ask, could possibly be interested in the variations of species? Find out in Part 2!
Posted by Heart of the Wood at 07:30