Russell Manners was a brother-in-law of my cartoonist cousin Charles de Noé. Although a great many of my ancestors made their mark, good or bad, here on Earth, Russell is as far as I know the only one to have an extra-terrestrial legacy. 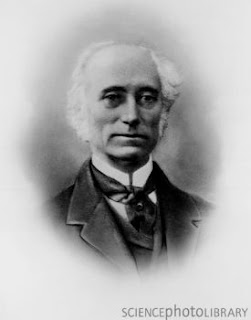 Russell Henry Manners (1800-1870),
a Manners on the Moon
(picture from www.sciencephoto.com)
His career was in the Royal Navy, but his interest was in astronomy. His enthusiasm led to his election to the Royal Astronomical Society in 1836 where, although not a practicing astronomer, he proved himself an administrative asset to the Society. He served for ten years as its honorary secretary and in 1868 was elected its president. When the time came to hand out names for features on the Moon, he had earned his place in the queue.
It turns out that there are rules for this sort of thing, administered by the International Astronomical Union. Planets are named after Gods and Goddesses, and their moons after the offspring of those gods. For example Mars  is named after the Roman god of war; its two moons are called Deimos and Phobos, the sons of Ares, the Greek god of war (something which would probably have my father, a classical scholar, turning in his grave; that mixing of Greek and Roman traditions would offend his purist soul!). Deimos means Panic and Phobos means Fear, two inescapable products of War. Comets are named after their discoverers, and it is possible for more than one person to discover a comet simultaneously – hence Comet Hale-Bopp, discovered and reported separately on 23rd July 1995 by both Alan Hale and Thomas Bopp.
The features on our own moon are reserved for those who have explored the moon, either in person or through telescopes as astronomers. So for example three small craters near the Apollo 11 landing site are named Aldrin, Collins and Armstrong in honour of the pioneering crew of the first manned mission to the moon. And, only 100 miles to the north-west across the Mare Tranquillitatis from Apollo 11's historic Tranquility Base, you will find the rather larger Manners Crater. 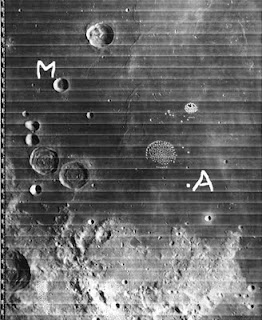 The Sea of Tranquility:
Manners Crater (M) and the Apollo 11 landing site (A)
As I write these words, I’ve been staring at images of it all afternoon; and I must say it’s becoming rather beautiful to me! Manners is a perfectly circular crater about 15km in diameter and 1.7km deep, with a distinct mountain in the centre of it. It’s a banded crater, which means that it has streaky sides – illustrating I think the movement of material outwards at the time of impact.
Any further technical description would be well beyond my comfort zone or qualifications grade. I’m just pleased as punch to think every time I look at the Moon that one of my ancestors has made his mark there. 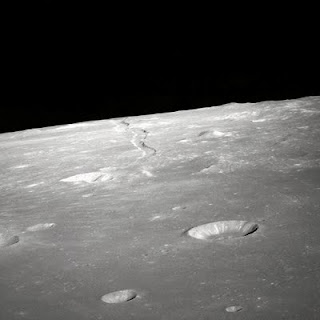 Manners Crater (the large crater on the right)
photographed from Apollo 10 in 1969
Posted by Heart of the Wood at 07:30