I have precious little to brag about in my family tree when it comes to sporting achievement. But, clutching at straws, I can claim a great great uncle by marriage who got pretty much to the top of his game. 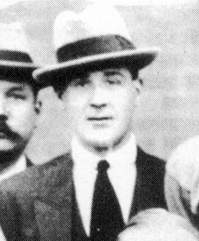 James Frew (born c1900)
James Frew’s father was a miner in the Ayrshire coalfields, and naturally he too started down the pits as a young man. In 1919 he married local girl Jean Piper of Sorn. Like most lads he played football in his spare time, and demonstrated such a talent for it that he played regularly for Nithsdale Wanderers down the road in Sanquhar (pronounced Sanker, if you’re not from round here!).
Nithsdale was a club on the rise. In 1920 they moved to Crawick Holm, a new ground with a stone grandstand just outside the town, and in 1923 they were invited to join the new Scottish League third division. In 1925 they won the championship (and promotion to the second division) with an 8-0 victory over Montrose in the last match of the season.
If Jimmy Frew played a part in the momentum which led to these successes, he was not around to enjoy the results themselves. In 1922 he was spotted by a talent scout from no less a club than London’s Chelsea FC. It is hard to believe that they were keeping an eye on teams like Nithsdale, but nevertheless Jimmy made his debut at Stamford Bridge, the Chelsea ground, on St Valentine’s Day 1923 in a 3-1 win over Everton. 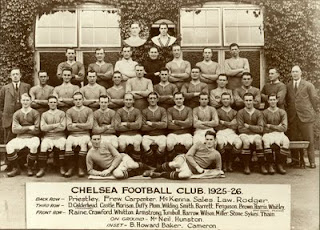 Chelsea FC, 1925-26 season
(Jimmy Frew, new father, back row, second from left)
Although his professional football career is quite well documented I can’t find any record of what position he played. I am guessing it was defensive because in 43 games with Chelsea and 58 with his next club, Southend United, he never scored a goal. If such things are genetic, it’s worth noting that his son Billy (born during his last season at Chelsea in 1926) was himself a good amateur goalkeeper.
Jimmy played his last match for Chelsea on 24th April 1926 and moved to Southend in Essex for two seasons from 1927 to 1929. He finished his pro days back up north as captain of Carlisle United, playing his part in the club’s triumphant double trouncing of Barrow, the local derby rivals, in the 1929-30 season (2-0 away, 7-1 at home). Not bad for a miner’s son from Kilmarnock. 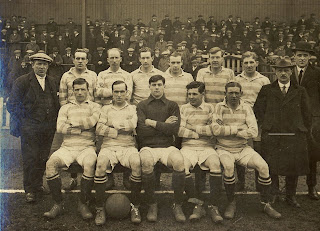 Where it all began -
Nithsdale Wanderers and the Crawick Holm stand, c1921
(Jimmy Frew back row, second from right)
Posted by Heart of the Wood at 07:30