It doesn’t take long to build up a detailed picture of the prominent Tipperary families of the eighteenth and nineteenth centuries. I have direct lines through the Coopers, Sadleirs, Chadwicks and Massys, who are united frequently by weddings, sometimes in successive generations. The ruling class, the Protestant Ascendancy as they are known, were a tiny self-contained minority in Ireland for hundreds of years. They kept within their own social and political circle of course and so it’s no wonder that the same families repeatedly intermarried. Other names, although not my direct relations, are also interwoven through those lines; and I can’t help but become curious about another family which seems to be an integral part of the same circle as my own. 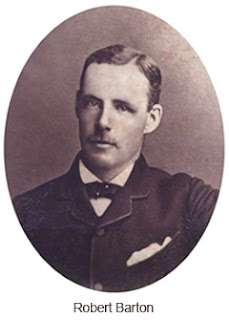 Captain Robert Johnston Barton (1839-1879)
of the 2nd Coldstream Guards
commanded the Frontier Light Horse at Hlobane
So it is that I now have a large Barton family tree on file. None of my direct ancestors were Bartons; but for example my 5x great grandfather Hugh Massy’s cousin Grace Massy married William Barton, and Hugh’s wife my 5x great grandmother Rebecca Delap’s aunt Margaret married Thomas Barton. I’m fascinated by such connections – but even I have to admit that it’s a tenuous justification for writing today about Margaret and Thomas Barton’s great grandson Robert Johnston Barton.
Robert’s modest entry in the Barton tree – “killed in action in Zululand 28th March 1879” – does not begin to tell his story. 1879 was the year of the Zulu War, a year which began disastrously for the British with the events depicted in the films Zulu and Zulu Dawn. 28th March was the date of the last of three morale-sapping massacres inflicted on the British by the Zulu army. 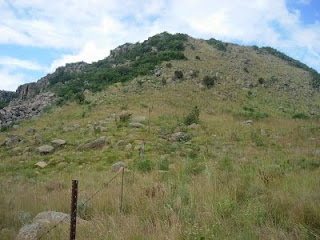 The slopes of Hlobane
tough on foot, tougher still on horseback
(photo by Neil Aspinshaw)
He was part of a foiled attack against a 3000-strong Zulu stronghold on a plateau called Hlobane Mountain. The British approach, under cover of darkness on the night of the 27th March, was hampered by the difficult terrain – steep, boulder-strewn slopes – and by a violent storm whose lightning flashes illuminated the British advance to the Zulu guards. At dawn it became clear that the Zulus were fully prepared for the attack with barricades and a network of caves and tunnels from which they were able to attack the British troops with ease.
Despite heavy casualties, the British fought their way onto the plateau. Barton was dispatched with 30 men to bury those who had died on the ascent. As he rode off, his commanding officer was horrified to see in the valley to the south a massive column of Zulu warriors, estimated at 22,000, moving quickly towards Hlobane. Retreat to the north was impossible because of even steeper slopes and the British were faced with having to fight their way back down through the very Zulus whose defences they had breached on the way up – Zulus now much emboldened by the approaching army of reinforcements – and towards the huge force now approaching them. 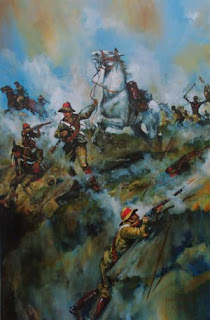 Massacre on Hlobane Mountain
(known to Zulus since 1879 as “Stabbing Mountain”)
Barton and another officer, Weatherley, joined forces, and with their combined cavalry of some 220 men, tried in vain to find another way off the mountain before forming a line and charging the defenders. Under a hailstorm of assegai spears, only 20, including Barton, survived. They fled down into the valley, straight into the arms of the advance party of the Zulu column. 15 more of them died then. Barton was injured, his horse too; but he paused to scoop up a wounded fellow officer before attempting to outrun the fast-moving Zulu army. After some miles the horse collapsed and they continued on foot; but escape in their condition was impossible.
A year later, with the war won and peace with the Zulus established, a British escort party was led to Barton’s body, still lying where he fell, by the very Zulu who had killed him; and Colonel Wood, who had planned the Hlobane raid, buried him at last.
A great deal has been written about the Zulu War. There are several accounts of the Battle of Hlobane, including vivid descriptions by JohnYoung, and by William Watson Race & Jon Guttman. Whatever you think of warfare, or imperialism, or even the Irish Protestant Ascendancy, there are tales of selfless, hopeless heroism at Hlobane which cannot fail to move you.
Posted by Heart of the Wood at 07:30