Sometimes it seems to me to have been an absolute rule: the eldest daughter was saddled with the role of housekeeper or nursemaid to her elderly parents. There are many examples of this apparently inescapable destiny in my family tree. I sometimes wonder just how explicit the obligation was, not to get married but to remain on the shelf caring for your surviving widowed mother or father. Was it the ordered custom of the day? Or was it a self-imposed fate, simply the inescapable sense of duty and responsibility that any eldest child feels, combined with the passive and nurturing role fostered in women in the 18th and 19th centuries? 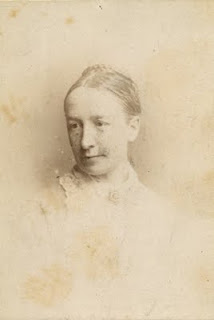 Anne Gurney Salter (1839-1925)
daughter and artist
My great great aunt Annie was the eldest daughter of my great great grandfather the Rev William Augustus Salter, and she spent her whole life in the service of her parents. I have no doubt that she had been helping her father out at his parishes in Brentwood and Amersham. In 1863, at the age of 23, she stepped up with her sisters Emma and Maria to help him run the school attached to his new chapel in Clarendon Street, Leamington Spa. They taught reading, arithmetic and singing to infants and young girls.
There was one paid teacher (Miss Baker, who worked for less because she was still studying for her certification) and one 13-year old pupil-teacher (paid a nominal sum to supervise the younger children). But the unrewarded labour of the Salter sisters will have made a huge difference to the school’s finances in the days before state provision of education. Parents paid a modest fee (between 2d and 9d) for their children to attend, so the temptation was always to increase the school’s population. But overcrowding at the Clarendon Street school was counter-productive as it often resulted in the withdrawal of the small state subsidy which the establishment received. 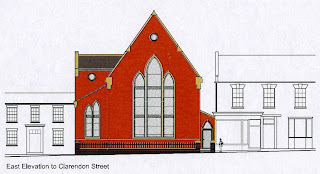 Clarendon Street Chapel, Leamington Spa
built for Rev William Augustus Salter in 1863
(a proposed reconstruction of 2009)
By the end of 1863 the school was regularly attracting around 150 children, although it was only permitted to teach 91, based on a calculation of 8 square feet per child. The pupil-teacher Miss Wyatt became ill with the responsibility of looking after them and had to drop out, increasing the workload of the Salters. They learned their teaching skills on the job, and better teaching was also good for the school’s finances. Pupils were regularly tested by external examiners, and poor results could lead to the withholding of part of the grant.
The demands on Anne and Maria increased in 1867 when Emma too became seriously ill. She died that November. Their younger sister Sarah could not help out, having got married earlier that year; and their youngest sister Emily was only 11. In 1869 the school lost almost all its grant because of overcrowding, and another year it received nothing at all because of understaffing. 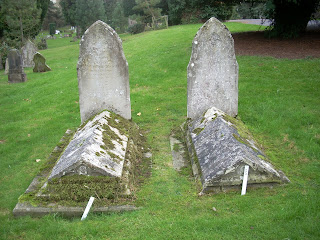 The graves of William and Emma Salter, and their daughter Emma
in Warwick Cemetery (photographed Nov 2010)
The Rev Salter, perhaps worn out himself by the strains of keeping school and chapel alive, died in 1879. It was probably a blessing that he didn’t live to see the establishment of the Leamington School Board in 1881, which took over the struggling Clarendon Street school and quickly closed it down. Soon afterwards Anne, Maria and Emily moved to London with their mother (also called Emma). But when she died in 1893 (when Anne was 53) and was buried near Leamington beside her husband and daughter Emma, the surviving sisters took rooms again in the town. They never married, and as far as I can tell they lived out their days in the familiar surroundings of those intense years in education.
Their father had at least left them well enough provided for in his will, and I like to think of them passing their days in useful charitable work amongst the former pupils and parishioners of Clarendon Street. Emily was the last of them – she died before I was born, but lived long enough to pass on some family lore and treasure to my father and my uncle, from whom in turn I inherited it. One of my most prized possessions is a set of beautifully hand-painted coffee cups and saucers, decorated by the three maiden aunts with pictures of wild flowers. It’s just the sort of genteel, acceptable activity which one could imagine three conventional spinster sisters pursuing, to while away the long bright hours of the evening of life. 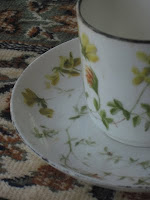 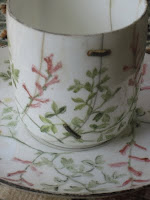 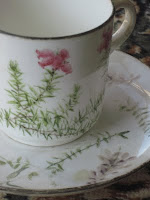 Coffee cups and saucers
hand painted with pictures of wild flowers
by Anne, Maria and Emily Salter, spinsters of the parish
Posted by Heart of the Wood at 07:30