I don’t know how I am related to Charles de Noé, only that I must be! His mother Frances Caroline Halliday is, somehow, at the heart of the closely knit circle of Hallidays, Tollemaches and Delaps from which my 6x great grandmother Rebecca Delap emerged. Frances’s connections by name, through wills and property are too numerous to be coincidences, but as far as I know, no one has been quite able to pin her to any specific part of the Halliday tree. There have been suggestions that she was the illegitimate daughter of Francis Delap Halliday and Frances Tollemache; but that would make her eventual marriage to the Count Louis Pantaléon Judes Amédée de Noé, a member of the French aristocracy, a socially unlikely union.
That said, scandal was never far from that generation of Tollemaches. Frances Tollemache’s sister Jane eloped with Francis Delap Halliday’s brother John (see my earlier blog about Jane); and Frances Caroline Halliday’s marriage to the Count was witnessed by another Tollemache sister, Louisa. It seems entirely possible that they might all have closed ranks over an illegitimacy in order to see Frances Caroline married off, and married off well at that. 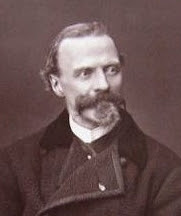 Charles Amédée Henri de Noé (1818-1879)
Charles Amédée Henri de Noé was the fifth son of the marriage, and could therefore have little expectation of inheritance. He was expected to go out and work for a living, and was lined up for a career in engineering after education at an institut de technologie. Instead, he went to painting classes led by Paul Delaroche and Nicolas Charlet and began a hugely successful career as a satirical cartoonist.
In the same way that Belgian cartoonist Georges Remi adapted his initials to sign his work Hergé (the sound of R.G. in French), Charles Amédée took the pen name Ch-Am – Cham. Since his surname is the French for [son] of Noah, Cham was also a  jokey reference to Ham son of Noah. Probably not a belly-laugh even in the 1840s, but perhaps enough to trigger a smile which might become a laugh as you read his cartoons. 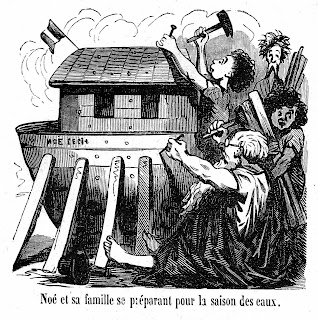 "Noah and his family prepare for the rainy season."
Cham wasn’t above inserting his own image into his drawings.
From the rear: Charles, his brothers Franck and William,
and as Noah himself, Charles’s father Louis de Noé
Cham’s strength was as a social rather than a political commentator. In a career lasting 40 years he is credited with over 40,000 drawings, an invaluable resource in the twenty-first century for studying the French nineteenth-century middle class and what one reviewer, R.L. Mayer, describes as “all eccentricities of the moment.”
If your French is better than my schoolboy understanding, you will enjoy http://amedeedenoe.unblog.fr/ a blog dedicated to Cham’s memory. 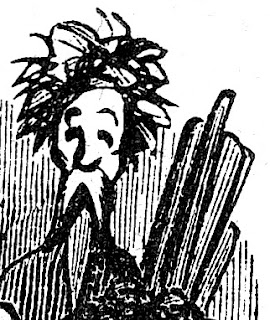