I described in an earlier post how Richard Verrall was set up by the Duke of Newcastle to run a Whig coffee house in the town of . The Duke was sparing no expense to ensure the Whig party’s advantage in the town. He was also pouring money into a club which met every Wednesday in a richly appointed Club Room at the White Hart Inn across the road from the coffee house. The landlord of the White Hart was none other than Dick Verrall, Coffee House Richard’s father, 4x great grandfather of my great aunt Helen Verrall. 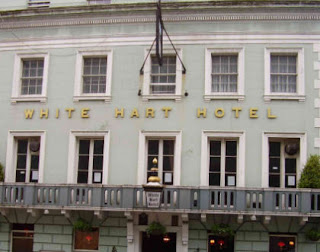 The White Hart Inn Lewes
Victorian on the outside, Elizabethan on the inside

As a building the White Hart goes back to the late sixteenth century, when it was a mansion belonging to ancestors of the Duke of Newcastle. Much evidence of this remains in the internal lay-out of the rooms and some surviving paneling. But in the early 1720s Dick Verrall remodelled it (presumably with backing) as a large hostelry. Downstairs there was a bar and parlour as well as the essential service areas – kitchen, buttery and brewhouse, and stables (the pub car park of the day, which could accommodate 100 of its patrons’ mounts). Upstairs, as well as the Duke’s Club Room, the premises now contained a “Great Room” with a balcony, a billiards room, three private “best bedrooms” and a dormitory in the attic for lesser guests.
Between the White Hart and the coffee house (which also contained the Lewes Assembly Rooms), the Duke of Newcastle’s influence on the town, exerted at arm’s length through the Verralls, was substantial. In addition to their roles in hospitality, several Verralls also served as constables for the town, a post which included duties as returning officer for parliamentary elections at which the Duke and his fellow Whigs hoped to do well! Dick was a constable; so were his sons Edward, Henry who ran the coffee house after the early death of his brother Richard, and William who took over the running of the White Hart after his father’s death in 1737.
As an exercise in mutual back-scratching, Dick had persuaded the Duke to engage young William Verrall in his kitchens. Although it might have been a hiring based on politics rather than talent, William took to cooking with great enthusiasm. He served his time under the Duke’s brilliant French chef M. de St Clouet who later returned to to serve Marechal Richlieu (a nephew of the Cardinal’s). 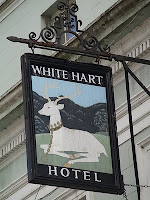 … in keeping with tradition …
When William took over at the White Hart he immediately began to promote it for its cooking “after the French method.” The inn went from strength to strength, bolstered by the new stagecoach routes between Lewes and London, and by the political successes of the Duke of Newcastle. William not only cooked for the classier clientele of his inn but also ran an outside catering operation for the gentry of the surrounding area.
By 1759 (the year Guiness was first brewed) he was able with some confidence to publish his book, “A Complete System of Cookery,” an early classic of the genre full of surprisingly modern recipes and useful tips for kitchen equipment and work practices. Its admirers included his contemporary the poet Thomas Gray, and the cookery writer who reintroduced French cuisine to in the mid twentieth century, Elizabeth David. It was republished in 1988, reprinted in 1999, and a new edition will appear in April 2011 complete with the notes which Gray made in his own copy of it.

William Verrall’s “A Complete System of Cookery” (1759)
The Duke of Newcastle’s investments all paid off, and he served two terms as Prime Minister, during which he was much caricatured as the George W Bush of his day, a geographically ignorant buffoon. History views him a little more kindly, particularly for 1759 (the year of Verrall’s publication) which became known as Annus Mirabilis, the year of miracles, because of his success in foreign policy especially against the French.
Verrall’s own fortunes mysteriously went into sharp decline. His first wife had died in 1757. Perhaps grief distracted him from the business of running the White Hart; perhaps illness did; or perhaps his success as a chef caused him to take his eye off the ball. For reasons unknown, he was declared bankrupt and his inn and stock sold off in March 1761, only two years after the publication of his book. He was dead within the month.
He was survived by his second wife, whom he had married only a few weeks earlier on . Perhaps she was unaware of the state of his finances, or his health. Certainly she declined to act as his administrator when his will was proved later in the year. She herself died four years later. But William’s culinary legacy lives on.

Email ThisBlogThis!Share to TwitterShare to FacebookShare to Pinterest
Labels: Verrall