I’ve been writing here recently about the Baker brothers William and Godfrey, who both served in the Bengal Army of the East India Company. And not so long ago in honour of my brother’s Portuguese wedding I wrote about my cousin Michael Hinton Castle’s first wife Susan Smith.

There are more powerful family connections to India than the Bakers, through MHC’s second wife (of three), Frances “Fanny” Boddam. Her family could be used to chart the early progress of the British rule in India. Fanny’s great grandfather Charles Boddam (active 1715-1726) was a warehouseman at Fort St George in Madras in around 1715. Her grandfather improved on that somewhat – Charles Boddam junior (1719-1794) rose to become a director of the East India Company. But her father Rawson Hart Boddam (1734-1812) topped the lot, serving for four years as the Governor of Bombay. 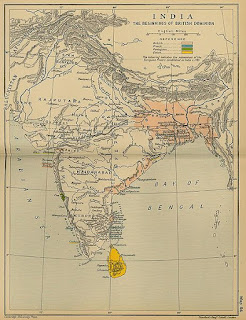 The British Dominion in India, c1783 –
little Bombay on the west coast, spreading Bengal in the east

Governor Boddam held the post from 1784 to 1788. His main claim to fame is that he was the first governor to be paid entirely by salary, at nearly £10,000 a year, a massive sum. It ensured that he could retire in great comfort to his new and stately home, redbrick Capel House north of London. 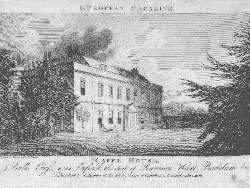 Capel House, Bulls Cross, near Enfield, the Seat of Rawson Hart Boddam Esq, in an engraving by J. Asperne in 1804
(now Capel Manor Hoticultural College,
which counts singer Kim Wilde among its alumni)

Bombay came under British rule after the marriage of Charles II to Catherine of Braganza in 1661. But only seven years later the British Crown passed control to the East India Company in return for a token annual rent of £10. The colony thrived to become the jewel in the Company’s crown, until Bengal (where the Baker boys later served) overtook it in importance in the mid 18th century.

Boddam’s rule sits in a period of relative calm between the first two Anglo-Maratha wars, both of which saw the Company expandng its influence by defeating serious threats to its authority from a confederacy of independent Indian rulers. The first war had ended with the Treaty of Salbai which, among other things, guaranteed peace for twenty years. So Boddam probably had a fairly easy time of it in earning his £40,000. 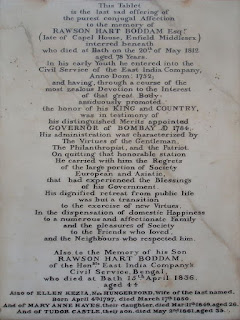 He died, almost exactly 200 years ago, on the 30th May 1812, in Bath in western England. I imagine there must have been a family home there in addition to the seat at Capel House. His son also died in Bath; and Bath is only a few miles from Bristol where his daughter Fanny’s future husband lived.

Fanny and Michael Castle had four children, two boys and two girls, before Fanny died of complications following the birth of the fourth. The boys were named after her parents Boddam and Tudor (her mother’s maiden name). The name of Tudor Castle recurs: my great uncle of that name was a promising poet before his early death in World War One; and Governor Boddam had a grandson called Tudor Castle Boddam, remembered on his memorial tablet in Bath Abbey.

Fanny and Michael's other son Boddam Castle, on the other hand, grew up to be a barrister and brought some shame on the family when he appeared in the Old Bailey in 1849 on the wrong side of the witness box. He stood accused of failing to pay maintenance for his illegitimate child. But that’s another story.
Posted by Heart of the Wood at 07:30