Last week the very helpful and friendly staff at Watford Museum sent me a newspaper cutting from the Watford Observer of 7th February 1958. It discussed the town council’s plans to demolish a row of four almshouses, in order to enlarge the car park behind the Three Crowns Public House on Watford High Street. 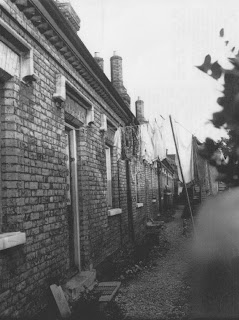 The David Salter Almshouses, Watford
built in 1843 (photograph from the Watford Observer, 1958)

The almshouses were erected in 1843 at the expense of my 4x great uncle David Salter, a deacon of Watford Baptist Meeting Place (now called Beechen Grove). A 1956 history of Beechen Grove by Walter Bennewith describes him as a hero of the Faith. He does seem to have been a mainstay of the Beechen Grove congregation in the first half of the nineteenth century, although a 1907 history by the incumbent of the time, Rev James Stuart includes a lengthy description of him as “of strong and forceful character, … with marked peculiarities which led him to pursue a path of his own. … He would not today have escaped the charge of dogmatism.” The Bennewith history goes further and calls him bigoted and eccentric. I like the sound of him!

David was baptized in 1799, along with  one Daniel Alcock, the first new members of the church under its new pastor Rev W. Groser. The two were soon joined by David’s younger brother Samuel and by John James Smith, the new owner of nearby Hamper Paper Mill – which was just a stone’s throw from Oxhey Lodge where David and his four brothers were born. 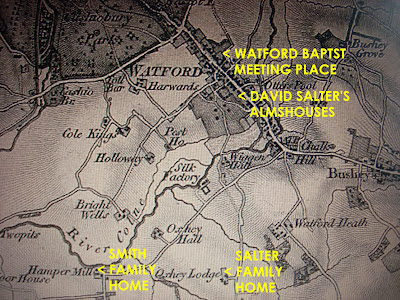 David Salter’s Watford, one street town
(from the First Series of Ordnance Survey maps,
dated 1856 but not showing railways which were built twenty years earlier!)

John James Smith ran a London stationery business in partnership with one William Lepard and was already married to Lepard’s daughter Elizabeth when he moved to Watford. He is certainly therefore responsible for David Salter’s greatest happiness, by introducing him to Elizabeth’s sister Sarah, whom David immediately fell in love with and made his wife. (History would repeat itself later in the century when Samuel Salter’s son William Augustus married Emma Gurney and introduced John James Smith’s grandson – also John James – to Emma’s sister Caroline!)

Alcock, Smith and the two Salters threw themselves into church service. Smith and Samuel Salter performed something of a double act as deacons in the first two decades of the nineteenth century, their places eventually being filled by Alcock and David Salter. The Salter family paid for new gravel paths and for a fresh coat of paint on the building; David Salter and John James Smith tried to outdo each other in donating baptizing gowns; and when concern was expressed about the cost of a new and much needed extension to the vestry, David simply offered to pay for the whole thing himself. 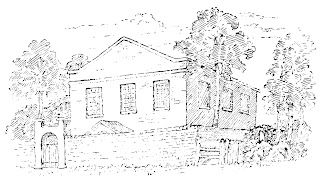 David’s happiness was short lived. Sarah died after only about three years of marriage, probably in childbirth. They had two children, Sarah and Samuel, neither of whom outlived their father. (Sarah died in 1838; Samuel may have died with his mother.) The death of his wife left David inconsolable and he became reclusive and eccentric. He refused to serve as deacon alongside his go-ahead nephew James Smith, son of his wife’s sister – perhaps the proximity to such a relative induced too-painful memories – and only accepted the position, in 1826, when James agree not to.

He continued to work tirelessly in the service of the church, although he was, I think, increasingly set in his ways and resistant to any change – he is reported to have been behind the abrupt departure of Rev Groser’s successor Rev Copley, and blocked an attempt by James to introduce open communion (communion for non-members). He was opposed to organ accompaniment for hymn singing, which James introduced when a new chapel was built in 1835.

He died in 1848, six years after his brother Samuel, four years after Samuel’s son Samuel joined David as a deacon of the church, and only one year before the death of his fellow deacon and 1799 applicant for baptism Daniel Alcock. Bennewith wrote of David: “Beneath his kill-joy, Puritan hide lay a heart that melted at another’s need. He did his best to be awkward, but Christianity would keep breaking in.”

One can all too easily imagine what he would have said when his almshouses, old and in need of much repair, were demolished in early 1960; and what he would have further remarked on learning that the car park too has now gone. But the David Salter Almshouses Trust continues to do the same work it was founded to do, administered to this day by deacons of Beechen Grove Baptist Chapel.

Thanks to Watford Museum and Beechen Grove Baptist Church for information gratefully received.
Posted by Heart of the Wood at 07:30