I am struck by how many of these articles are bookish. The subjects have in many cases written books, or been the subject of books, and copies of many of them are in my possession. It has set me off on a new project, a more formal survey of all the books on my shelves with family connections. Several came from my father’s library. He was an English Literature lecturer and he inherited hundreds of his books from his father and aunt. They in turn … and so on, back into the eighteenth century.


Every book with an inscription in it adds to the family story. My grandparents for example seem to have conducted their courtship through the gift of books. There are several volumes of poetry to F.G.S. (Frederick Gurney Salter) from E.M.C. (Eleanor May Castle), including a collection called Georgian Poetry 1912-1915, published by the Poetry Bookshop in Devonshire Street, London, in November 1915. It’s intended to be a survey of “poets of the newer generation” and has works by DH Lawrence and Rupert Brooke among others. It is dedicated in part to the latter, who had died in the war in May that year. 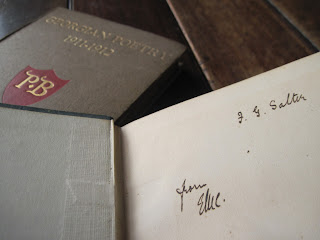 
May’s brother was Tudor Castle, himself a rising poet and a peripheral member of the Bloomsbury set, who had given to Fred one volume of Brooke’s work (Poems, the only one published in Brooke’s lifetime) in February 1913 and to May a companion volume (1914 and Other Poems, published posthumously) in October 1915. I don’t know, but it’s very possible that Tudor and Rupert knew each other. 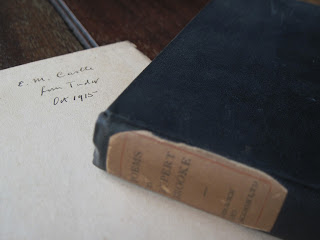 F.G. Salter's and E.M. Castle’s volumes of the poetry of Rupert Brooke


Tudor died in a gas attack at the start of the Battle of the Somme on the 31st August 1916, another dead poet. Fred himself only lost a leg in the war – a note on his war record says “eligible for S.W.B. 20.11.15” and the S.W.B., the Silver War Badge, was awarded to soldiers who were honourably discharged from service through injury. 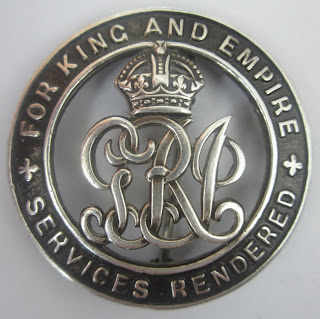 The Silver War Badge
“For King and Empire, Services Rendered”


The inscription in Georgian Poetry is dated 29th January 1916. Another book confirms that Fred was convalescing in March 1916. It’s a Longman’s Pocket Library edition of William Morris’s The Pilgrims of Hope and Chants for Socialists, published in 1915. The copy I have inherited from my father has an inscription: “1916, to F.G. Salter, from May Morris.” A long letter dated 13th March 1916 from May, William Morris’s daughter, is tucked inside the small volume, in which she writes: “Lately I heard sad news of you, and scarcely knew what to write, feeling so grieved, and yet knowing that like all the other men I know who are fighting, you are taking the thing that has come to you with fine courage and serenity.” 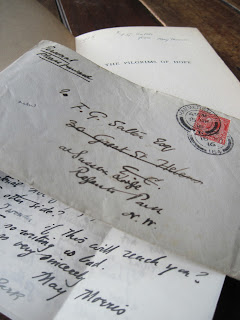 Letter and book from May Morris to F.G. Salter


Fred Salter and May Castle were married on the 16th May that year. They raised a family of three sons and continued to give each other books. On Fred’s 46th birthday in 1922 he received not one but three volumes of the Heinemann edition of the novels of Dostoevsky. From his parents he got The Idiot, rather formally inscribed “To F.G. Salter, with best birthday wishes from W.H. Gurney Salter and Jane Gurney Salter;” and from May, now signing herself E.M.S., Crime and Punishment and The Brothers Kramazov. 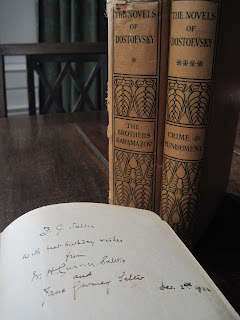 
Britain had only just begun to discover Russian literature. The earliest translations appeared in 1894, and they were all made by Constance Garnett – the Heinemann Dostoevsky’s, first published just before the First World War, were by her. Garnett, who had once worked as a reader for Heinemann, translated 71 Russian works in forty years after meeting two Russian revolutionary exiles, Sergei Stepniak and Felix Volkhovsky, in 1891. She learned Russian and travelled there on several occasions. She deserves great credit for introducing the works of Gogol, Checkhov, Turgenev, Tolstoy and others to an English-speaking audience.


She is not however without her critics. Working at speed, she would sometimes gloss over difficult or sensitive passages “for readability,” and if she did not understand a word or phrase, she was quite likely simply to omit it from the text. This was particularly true of the versions of Dostoevsky which Fred received on his 46th birthday. In general, she tended to ignore matters of individual style, to the extent that post-war Russian poet Josef Brodsky, remarked: “The reason English-speaking readers can barely tell the difference between Tolstoy and Dostoevsky is that they aren't reading the prose of either one. They're reading Constance Garnett.”
Posted by Heart of the Wood at 07:30