Louisa Powell married George MacDonald in 1851. Their daughter Caroline Grace MacDonald married my great great grandfather’s nephew Kingsbury Jameson thirty years later in 1881. George is the best known of these, a prolific nineteenth century fantasy author and theologian whom no less a theologian and fantasy author than C.S. Lewis regarded as the master of the genre. I’ve written about Kingsbury and Grace here before; Louisa wrote the stage adaptation of Pilgrim’s Progress which brought Grace and Kingsbury together. 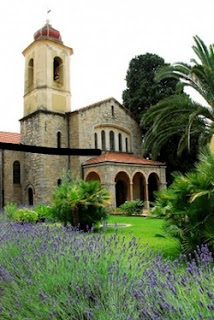 Kingsbury Jameson was the chaplain of the English Church in Bordighera, a small town on the Italian Riviera which the MacDonalds had made their winter home. Their home, Casa Coraggio, became a hub of entertainment in the town, not only for the British residents but the whole population. Entertainments and lectures were regularly held there in a huge room on the first floor, which (it is reported) held five pianos.

Born before women were considered worthy of an education, Louisa had acquired the usual genteel Victorian woman’s skills – literacy (which led her to play-writing), needlework (which she applied to scenery and costume-making) and music. She could sing and play the piano and must have played a central part in musical evenings at Casa Corragio. 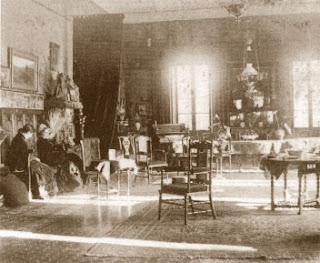 The Salon in Casa Corragio, with Louisa and one of her daughters sitting on the left

She also took on the role of choirmistress in her son-in-law’s church and played the organ there, considered the best such instrument in all of Liguria – a masterpiece of late eighteenth century Genoese woodcarving. The church became the last resting place of Grace in 1884 and Louisa must have felt close to her daughter through her musical duties. Louisa herself is buried there now.

At 5.30am on 23rd February 1887 a massive earthquake struck the northern Mediterranean coast, with its epicentre at Nice, only twenty miles west of Bordighera. A tsunami struck Mentone, the French resort midway between Nice and Bordighera. Tremors continued for three or four hours and there was great loss of life, much of it from the collapse of buildings onto refugees sheltering inside them. 3000 people died in the event and Bordighera was, as Louisa’s son Greville later wrote, “entrapped in [the earthquake’s] fellest grip.” 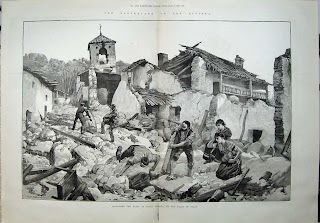 Searching the rubble in Diano Marina, about 30 miles further east of the epicentre than Bordighera, after the Riviera earthquake of 1887 (from the Illustrated London News)

Casa Coraggio (literally “the house of courage”) suffered some damage. The MacDonalds in their position at the centre of local society did what they could to provide aid and cover to the displaced and injured. The following morning Louisa was in the church playing the organ when aftershocks began again to shake the town. In an act of almost stereotypical Englishness she did not stop what she was doing but moved seamlessly into a defiant rendition of Handel’s Hallelujah Chorus!

Four years later Louisa got an organ of her own, which she inherited from her brother George Powell. The organ had been made for George by English manufacturer William George Trice at his factory in Genoa. Louisa had it installed in the salon at Casa Coraggio above the five pianos. Variety concerts there must have been extraordinary events. 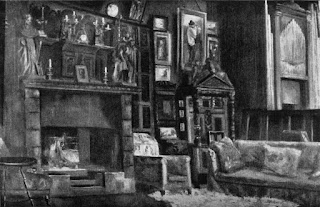 The Salon in Casa Coraggio after 1891, with the organ installed

After the deaths of Louisa and three years later her husband George, the MacDonalds ended their connection with Bordighera. Their son Greville sold the Casa Coraggio organ to a local parish church in Bordighera, Borghetto S. Nicolograve. There it remains, almost unchanged save for some minor additions of 1934. It fell into disuse, but was restored to its former glory in 2001. I like to think of her music soaring above the many tragedies and losses of her life. Along with the organ in the English Church, the Borghetto organ now serves (to me at any rate) as a reminder of Louisa Powell MacDonald’s spirited playing, come hell or high water. 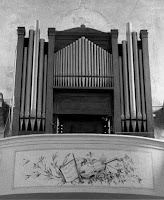