Rioting seems terribly un-British somehow. We’re more ready to march in protest than we used to be. But by and large we continue to place our faith in the democratic process, despite the efforts of some politicians in recent years to discredit the political process completely. Expenses are fiddled, promises are broken … but representation of the people in parliament was hard won, so we cling to it.

Some places are more ready to riot than others, and perhaps none more so than Bristol, home of my Castle family ancestors. In 1793 for example, riots over continuing bridge tolls were ruthlessly quelled when soldiers fired into the crowd killing 11 people, many of them innocently caught up in the demonstrations. In 1831 the most violent riots in modern British history left up to 500 dead and the city in flames. 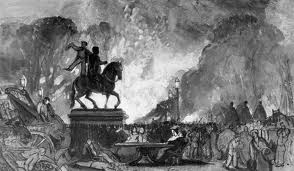 The odd thing is that the year after both of these dramatic uprisings, the annually elected post of Bristol town sheriff was filled by a Castle – in 1794 by my 4x great uncle Robert Castle, and in 1832 by his son, my great great grandfather’s cousin Michael Hinton Castle. I don’t really know what to make of that. Was it just coincidence? Both men also served in other years as mayor. I like to think that they were considered suitable candidates for sheriff because, with their family tradition of liberal, Presbyterian non-conformism, they were more in touch with popular sentiment than any Tories in the running.

The bloody disturbances of 1831 were a pivotal event in the nation’s slow march towards representative democracy. They were triggered by the defeat in the broadly Tory House of Lords of a liberal Reform Bill which had been passed by the Whig-dominated House of Commons. The Act sought to increase the electorate and reduce the number of rotten boroughs. In Bristol for example only 6,000 out of a population of 104,000 were eligible to vote in 1831. Meanwhile some Members of Parliament represented so-called rotten boroughs, constituencies whose population had dwindled in some cases to zero and whose seats could simply be bought from the local landlord. Everywhere the ballot was not secret, and votes could be won with money or threats. Reform of the electoral system was desperately needed.

One of the fiercest opponents of reform happened to be the Bristol recorder, Sir Charles Wetherell. When he arrived in the city only a few weeks after the Bill’s defeat his carriage was pelted with stones. He was forced to abandon his sitting in the Assize Courts; he took refuge in the Mansion House but fled with the mayor across the rooftops as angry Bristol citizens broke in.

Things quickly escalated, inflamed by an advance on a crowd by a company of Dragoons with threateningly drawn sabres in which one man was shot. Buildings were set on fire and Bristol’s prisons were stormed, the escaped prisoners swelling the crowds of thousands. Finally, after three days of anarchy, the mayor of the day gave the order to “take the most vigorous, effective and decisive measures to quell the riot.” 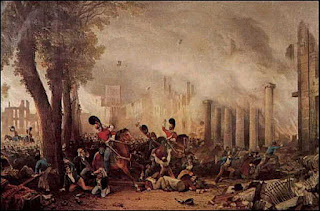 This time the Dragoons charged into the mob of men, women and children with sabres flying, cutting them down and pursuing fleeing bands of protesters into the surrounding countryside. The mayor was accused of neglecting his duties by not ordering the charge sooner, and the Captain of the Dragoons was court-martialled for refusing to use rifles on the crowd – he committed suicide during his trial. Four rioters were sentenced to hang and 88 others imprisoned or transported.

So representation of the people was hard won – in 1832, the year Michael Hinton Castle served as sheriff of Bristol, a watered-down version of the Reform Act was finally passed in Parliament. 56 rotten boroughs were abolished and the vote was extended to around one in seven of the population. A more peaceful demonstration, in the form of a 10,000-strong petition to the king to save the lives of the four men condemned to hang, failed.
Posted by Heart of the Wood at 07:30