My 5x great uncle Godfrey served alongside his brother William in the Bengal Army of the East India Company in the late 18th century. Despite being court-martialed once for insubordination he continued to rise through the ranks to become a Captain. But in 1782 he was eventually persuaded to resign amidst accusations that he had held an entire native village to ransom. Is this how the British Empire was forged?

It was fairly common practice for Britons serving with the East India Company to find inventive ways of augmenting their modest Company pay. Godfrey, like his brother William who followed him in the post, was a quartermaster responsible for the purchase of supplies to the Bengal Army. William certainly set up his own enterprises from which to purchase those supplies, and presumably Godfrey pursued the same income-expanding policies. But extortion on a village scale seems to have been a scheme too far. 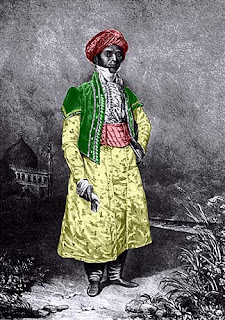 Godfrey returned in disgrace to the city of Cork in his native Ireland, where his father (also Godfrey) was a prominent merchant. He brought with him the faithful companion of his years in India, Dean Mahomed, a muslim who had served him since the age of 12 when Baker first arrived in India as a fresh-faced cadet. Mahomet had risen to the rank of Subedar, the highest attainable by an Indian in the Bengal Army; but when Baker resigned Mahomed resigned with him in an act of loyal solidarity.

Back in Cork, Mahomed’s life took a remarkable series of twists and turns, bearing in mind that he was an Indian in Imperial Britain in the late 18th century. He went to school, where he received a thoroughly British grounding in English language and literature. He applied what he had learned to the publication in 1794 of the first ever book written in English by an Indian, snappily titled The Travels of Dean Mahomet, A Native of Patna in Bengal, Through Several Parts of India, While in the Service of The Honourable The East India Company Written by Himself, In a Series of Letters to a Friend. 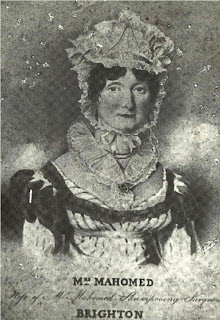 During his studies he fell in love and eloped with a fellow student, Jane Daly – a teenage member of the ruling white Protestant Ascendancy. Although you might expect this to have been a shocking event, it does not seem to have done Mahomed’s standing in local society any harm. In fact, the publication of his Travels was funded by advance subscriptions from many prominent Cork families. Today the book is regarded as a unique social record, a view of India by an Indian working for the occupying power. There is a superb modern edition with biographical commentary by Michael H Fisher, well worth tracking down.

After the death of his patron, Mahomed joined the household of Godfrey’s brother William. But when William got married in 1807, Dean and Jane Mahomed were no longer welcome there and they moved to London. In 1809 they opened what is now regarded as Britain first-ever Indian restaurant, the Hindustanee Coffee House at 34 George St. After some initial success, the venture went bankrupt in 1812 and the couple moved to Brighton. 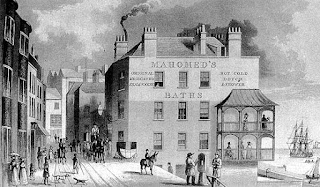 There Mahomed established himself in perhaps the strangest role of his life, as a massage therapist of sorts, practicing what he called shampooing – not what you’re thinking, the word comes from the Hindi word “chhampa,” meaning to press. He opened Mahomed’s Baths, a bath house offering Indian oil massage and medicated vapour baths. The business thrived, bolstered by claims no worse than those of many quacks of the day. It even launched a branch in London run by one of Dean’s sons. But eventually the fashion for it declined; and Mahomed died in 1851 almost forgotten by the world.

Dean Mahomed deserves credit for his capacity to reinvent himself after setbacks. He led a life rich in variety – I’ve barely scratched the surface here – and as a writer, restaurateur and therapist pioneered the art of marketing “exotic” Indian culture to a western audience.

Uncle Godfrey himself did not live to see any of his old friend’s successes. Perhaps the shame of his dismissal from the Bengal Army sent him into physical decline. Perhaps the shock of the Irish climate was just too much after 13 years in India. He died only four years after his return to Cork, the year Dean and Jane got married.
Posted by Heart of the Wood at 07:30

Email ThisBlogThis!Share to TwitterShare to FacebookShare to Pinterest
Labels: Baker