My father-in-law talks about leaving things on the Too Difficult pile, and goodness knows that’s often a very tall pile when it comes to family tree puzzles. One of the items in my Too Difficult pending tray has been for a long time this faint pencil drawing of (presumably) a former family home. It came to me amongst the many family papers which I inherited from my uncle John, and although there are some hand-written notes on the back, they refer to people I had never come across. So they only deepen the conundrum. 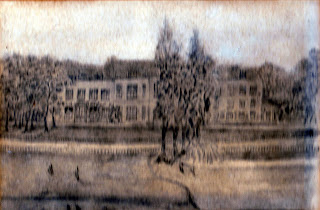 There’s no indication of the artist. On the back is written the name of the place – Woodhouse, Finchley – and the note “owned 1st by Uncle Thomas Collins & left by him to Aunt Lambert” and, I think in a second hand, “my Castle grandmother’s sister.” Then a third faint hand, probably of my Aunt Pamela, John’s wife, has written on a sticker, “EMS grandmother was Caroline Jennings who m. William Henry Castle, their son was EMS father William Henry.” At the bottom on the back, someone – probably John – has added, “1965. Removed from frame to be photographed for Col Busby.”

The rear view of Woodhouse, Finchley

I have another picture with multiple notes on the back, the identity of whose hands I do know. (I wrote apiece about that picture here a couple of years ago.) On that picture, one writer adds a footnote to a description, “This was written out for me by my mother” and signed “May Salter.” Sure enough, May’s writing of the word “mother” and the hand that wrote “my Castle grandmother” on the Woodhouse sketch are identical.

So Aunt Lambert is sister to Caroline Castle nee Jennings, grandmother of Eleanor May Salter nee Castle (who is MY grandmother!). Aunt Lambert is a 3x great aunt I never knew I had. Was Lambert her married surname, or her Christian name? And who was Thomas Collins to her? May’s grandmother’s full name was Caroline Collins Jennings (1816-1876), so perhaps her mother was a Collins.

Woodhouse College in 2011
with the remodeled façade of 1888

The Wikipedia entry for the Woodhouse area of Finchley describes its origins with three houses called the Woodhouses sometime before 1655. In the mid 18th century there was a single house of this name and it was home, says Wiki, to the well-known plastererThomas Collins! It was reconstructed in 1888 (when the bay window just discernable in my pencil drawing was replaced with a grand classic façade with a pillar'd entrance). In 1925 it became Woodhouse Grammar School, now Woodhouse College. In 2012 it is hosting tennis camps for the young in the run-up to the London Olympics.

Well-known 18th century plasterer Thomas Collins was the subject of a biography published in 1965 by John Henry Busby, “Thomas Collins of Woodhouse, Finchley and Berners Street, St. Marylebone.” That solves the mystery of the 1965 footnote, and there’s further confirmation in the existence of the Thomas Collins Papers, an archive of correspondence at the Centre for South Asian Studies donated by Col TH Busby, my uncle John and my aunt his cousin Deborah Scott nee Castle! 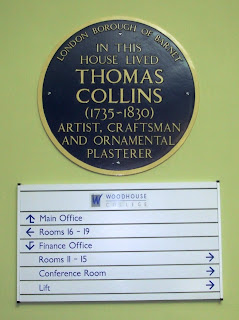 Collins (1735-1830) was barely contemporary with 19th century Caroline Jennings (1816-1876). I can find no trace of her sister Aunt Lambert, or any of Caroline’s family except her father William Jennings. When Thomas died at the grand age of 95, Caroline was only 14 and presumably Lambert was of a similar age; why leave her the big house at Finchley? As always, there are as many questions as answers in the Too Difficult pile; but at least, by figuring things out this far, I have replaced some of the questions with others!

STOP PRESS! Thanks to the generous intervention of the Birmingham & Midlands Society for Genealogy and Heraldry (via Twitter) I now know who Aunt Lambert was - Caroline's sister Martgaret Collins Jennings (1802-1877) married William Lambert. He must have made an impression. Caroline and Margaret's oldest sister Susannah Rees nee Jennings had a son she called Lambert Rees.
Posted by Heart of the Wood at 07:30