I am frustrated by Richard William Ralph Sadleir (1819-1876) and his family who, in a century obsessed with leaving its mark for posterity and recording everything, have left almost no record of themselves. Worse than that, it is beginning to appear that they left almost no descendents either. Can it really be that I and my few siblings are genetically all that remain of my great great grandfather?


His was a family on its way down. In 1854 he was forced to sell the family’s estates in County Tipperary following the collapse of the Tipperary Bank – a financial disaster caused by his own cousin John Sadleir’s reckless and fraudulent dealing in bogus shares. The impoverished and embarrassed Sadleirs moved to England to begin a new life on Merseyside. My great great grandfather invested unwisely in the new chemical industry of the region. When his business partner fled, the former Tipperary landowner ended his days as a bank clerk in Toxteth. 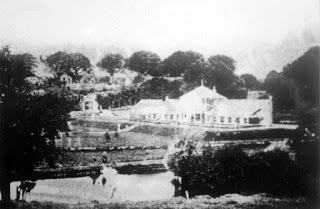 Sadleirswells, where my great grandmother was born,
home of the Sadleirs until 1854


Of his five children, my great grandmother Eleanor Octavia Wilhelmina Sadleir had three children, only one of whom (Eleanor May Castle) had children of her own – three again, of whom only my father Charles Henry Salter had children. RWRS’s other two daughters Margarita and Alicia never married, one son Richard married too late in life to have children; and the other, Eyre, died single and down on his luck in Belfast in late 1901.


Or so I thought. I went in search of Eyre and found him in the April 1901 census, unmarried, a paying guest at an inn in Walsall. Then I looked for a death date, and found it, late 1901, among the BMDs - the Births, Marriages and Deaths columns. Typical Sadleir, I thought, decessit sine prole – died without issue (which is how genealogists say died childless) like the rest of my great grandmother’s siblings.


Only, it wasn’t a D, it was an M. In fearing the worst I had found what I was looking for, not what was there. In the final quarter of 1901 Eyre Cooper Sadleir got married, not buried. His new wife was Elizabeth Dawson Milligan (b. 1883), a Belfast girl half his age who worked like the rest of her family in Belfast’s internationally important linen industry. 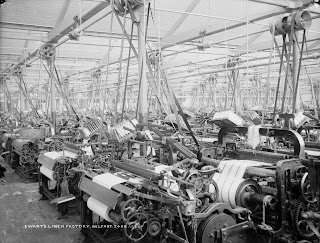 
Eyre was by trade a steam pipe fitter, and it was surely this that took him from his native Lancashire to Belfast. The linen mills needed power, and they got it from steam engines. It was the city’s expertise in steam engineering which helped it to become a major centre for ship-building by the beginning of the twentieth century. I don’t know precisely when he moved to Belfast, but it made sense to move to a city of such opportunity. If the move came after the April 1901 census (when he was in Walsall), it would make for a whirlwind courtship of Elizabeth. From Walsall pub in April to Belfast marriage in December is only nine months, and I fear it may have been a shotgun wedding. 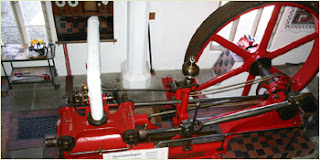 
It’s surprising to find Eyre ten years later on the April 1911 census, still in Belfast, describing himself as an unemployed steam fitter. Demand for his skills can never have been higher than then. Mass-produced cotton goods didn’t begin to threaten the city’s linen industry until after the First World War; and the shipyards were busier than ever. In December 1908 the city’s (and the world’s) biggest yard, Harland & Wolff, began work on a new commission from the White Star Line, the construction of three Olympic class liners. At the height of their construction over the next six years the yard was employing 15,000 men. Surely there was work for Eyre on the Olympic, the Britannic or the Titanic? 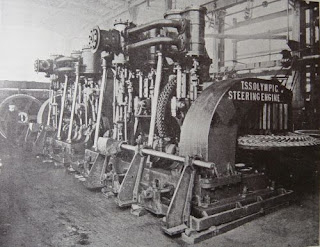 Steering engine for the TSS Olympic – her sister ship the Titanic had two such steam engines – to turn a rudder which weighed over 100 tons. Other even larger engines drove the propellors themselves.


Eyre died in Lisburn in 1920, having made, as far as I can tell, no other mark in life than his census returns and his marriage. But I’ve been wrong before. And there is one way, I now know, in which he did leave a legacy. In the 1911 census return Eyre Cooper Sadleir declares that as well as being an unemployed steam fitter, he is a father – to two children both then still living, cousins of my grandmother. Perhaps I and my siblings are not alone after all.
Posted by Heart of the Wood at 07:30