At a time before general suffrage, electorates were small and more or less corrupt clubs of privileged burghers. There was in those days (the start of the nineteenth century) a political practice strange to modern minds, of nominating and even electing people for public office without their consent. Thomas, the younger of the three, was not unusual therefore in refusing to serve when he was elected an alderman of Bristol Corporation on two occasions, in 1812 and 1820. Michael also refused when he was voted in twice, in 1798 and 1806, although he relented when elected for a third time in 1809. He remained a member thereafter until his death in 1821, having also served terms as sheriff and mayor of the city. Robert, the eldest, had that eldest-child sense of responsibility and accepted his election from the start, in 1794. He was sheriff twice and as Mayor of Bristol died in office in 1803. 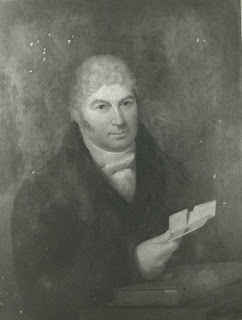 Michael Castle (1768-1821)
died intestate, a warning to us all!
At least his daughter Catherine didn’t make that mistake.

All this power and influence created enormous wealth in the Castle dynasty. Robert and Thomas had large families whose members inherited their wealth and married with many of the other prominent and powerful Bristol families of the day. Michael however left only one child, a daughter Catherine who died, unmarried, on 11th December 1834, just three weeks after her twenty-second birthday.

Which is where I come in. Having inherited a suitcase full of nineteenth century Castle correspondence, I came across a letter to gladden the heart of any family historian – one dated 28th December 1834 which begins, “I know you are very anxious to hear the result of today’s proceedings, and I am just returned from the reading of the Will.”

The same letter ends with a postscript – “Do not mention to anyone our suspicions of underhand work with respect to poor Kate’s Will, as it is better that it should not come from us; but you shall hear all particulars when you return and then judge for yourself.” In between, Charles Castle (a son of Thomas) writes to his sister Julia in scandalized tones about its terms. He is convinced that “there is some thing not quite right about the Will …, that there has been some undue influence over Kate’s mind. … [We] have suspicions of some others who shall remain nameless.”

This is all based on the fact that Catherine’s mother’s side of the family, the Kiddells, are rather better provided for than her Castle cousins are. He reports that Julia, Charles and their eight surviving siblings, and perhaps also the surviving children of Robert Castle, will share £11,000 – a pretty large bequest in 1834, I would have thought. But Charles goes on to point out that each Kiddell is getting at least £3000 apiece, as are various family retainers and business associates. One Mr Harris, a much disliked associate of Kate’s late father nevertheless described in the will as “the particular friend of my late father,” gets £10,500, almost as much as the whole Castle tribe. Another, the mysteriously named Sea Griffin, gets £30,000. “There is also a small quantity of plate left to Hinton Castle. That is all the Castles get from their sick relation.” 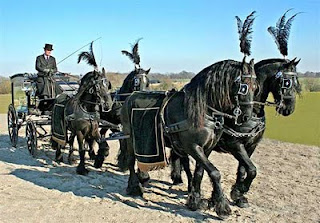 A hearse and four makes quite a statement at a funeral.
(This one is from horse-drawn carriage specialists Absolutely Fabulous)

There was certainly plenty of money floating about. The will reading immediately followed the funeral, which “was conducted on the most expensive scale. Six coaches and four, a chariot and four and a hearse another, and about six private carriages. In the chariot were Dr Carpenter & Mr Ackland; their followed two coaches filled with pall bearers, then the hearse then a coach containing uncle Henry, Hinton, Robt and Michael. Then a coach with Wm & yr humble servant, Sanders & Harris. How the remaining two were filled I do not know. Harris was “sighing like a furnace” the whole way from Stapleton to Brunswick Square, and I understand from Michael and Uncle Henry, who went up at separate times with him to see the Coffin before the procession started, that he was exercising his bellows in the same manner there.”

Charles and Julia’s father Thomas had died seven years earlier, presumably leaving similar legacies in favour of his own nearest and dearest instead of his brother Michael’s. So I’d say Charles and Julia didn’t have too much to complain about. But there’s nothing like a will for stirring a family up, I’ve found! And in the midst of Charles’s trouble-making, even he is forced to admit that “as far as regards myself I am very well satisfied. It is I think more than we had reason to expect.”

At one point in the letter Charles breaks off from legacy gossip to pass on a snippet of shocking Bristol news. Its nature may explain the readiness of the Castle cousins to believe in skullduggery concerning Kate Castle’s will. More in my next blog!
Posted by Heart of the Wood at 07:30