I have my fair share of the alcohol trade in my family tree! I am tantalisingly close to finding a link with the Salter brewing family of Rickmansworth in Hertfordshire, although that may just be wishful thinking. And my great grandfather James Piper definitely had a whisky warehouse in Leith which was bombed during the Great War.

Although the bombing is notable, the presence of bonded warehouses in Leith is not. Leith is in Scotland, after all! However, my 3x great grandfather Thomas Castle was a whisky distiller a century earlier and in an altogether more surprising location. Bristol is not the first place you think of when you think of a drop of Scotch. But there was a thriving spirits industry there – at least five distilleries were in business there at the start of the nineteenth century. One of the oldest was the one owned in 1821 by Thomas Castle, in the city’s Cheese Lane. I don’t know when or how he first came into possession of Cheese Lane, which was established around 1761. Thomas' father was a Presbyterian minister in rural Hatherleigh in Devon, 100 miles to the west of Bristol, where the decline of the wool industry caused many to migrate to the cities in the late 18th century.

It’s unfortunate that most of Bristol’s wealth was built on what is known euphemistically as the Triangular Trade. Brandy and other goods from Britain went to Africa to pay for slaves, who were taken to the West Indies in exchange for sugar and rum, which went to Britain, which sent brandy and other goods to Africa … 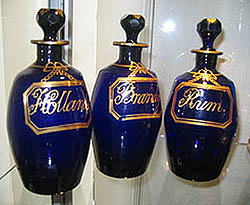 Bristol was a centre of apple brandy production for a while, particularly during times of war with France when French brandy was not available. After the British victory over the French at Waterloo (1813), and with the slave trade in terminal decline, the fortunes of British brandies also suffered. The Bristol Whisky Distillery, as the Cheese Lane manufactory was known, went from strength to strength however. Barley fields next to the distillery in the St Phillips area of Bristol supplied its pot stills, and the results were shipped to London and beyond.

Thomas Castle would have been unable to capitalise on the invention of the patent still in 1826, just a year before his death. But such stills were eventually installed and contributed to the survival of the factory, allowing for more efficient mass production of grain spirit. After Thomas’ death in 1827 it passed out of the family. But it continued under various ownerships until 6th December 1940, when the blitz which destroyed so many of Bristol’s old streets and buildings also called “Last Orders” on the Cheese Lane Distillery. The flames of the burning spirits must have reached high into the night sky, and the bombs that landed in Cheese Lane that night also took the lives of a fireman, two members of the Home Guard and a civilian. 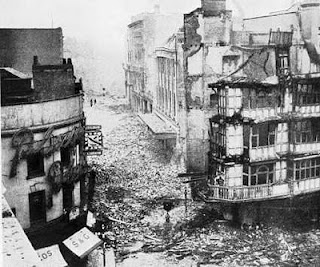 Bristol historian Paul Townsend's website, The Changing Face of Bristol, is a rich source of stories and images of Bristol, including the above photograph of Wine Street on the morning of 25th November 1940.
Posted by Heart of the Wood at 07:30